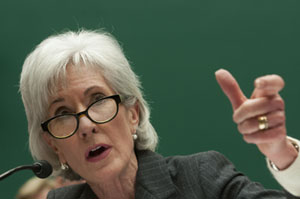 MARY AGNES CAREY: Welcome to Health on the Hill, I’m Mary Agnes Carey. Department of Health and Human Services Secretary Kathleen Sebelius was back on Capitol Hill today answering from lawmakers about the troubled rollout of healthcare.gov. Emily Ethridge of CQ Roll Call was there and joins us now. Emily, thanks so much.

EMILY ETHRIDGE: Thanks for having me.

MARY AGNES CAREY:  In testimony before the House Energy and Commerce Health Subcommittee, Secy. Sebelius said today that she would have done the rollout of healthcare.gov a little bit differently to avoid some of the problems that consumers have experienced with that website. What did she say that she would have changed?

EMILY ETHRIDGE: She said that she might have maybe rolled out the website on a smaller basis allowing fewer people to access it at the beginning, doing more beta testing to see how it worked so there wasn’t this surge of people that flooded the website and caused it to crash repeatedly as we saw beginning in October.

MARY AGNES CAREY: She also talked about some new enrollment numbers that have just come out today. What are those?

EMILY ETHRIDGE: Right, well just today HHS released their enrollment numbers for people in the exchanges. They say nearly 365,000 people have enrolled in both the state and the federally run exchanges for October and November. Now that’s when some of the website improvements were happening, but before the administration said they really got the website working, up and running the way they wanted it to be. So they’re encouraged by those numbers.

MARY AGNES CAREY: How do they compare with some of the internal estimates that we’ve heard about?

MARY AGNES CAREY: But they’re saying, if I understand you correctly, and what I also heard today at the hearing, that with all the improvements they’ve made through November, they expect those numbers to really bump up in December, especially as people look at this December 23rd enrollment deadline.

EMILY ETHRIDGE:  Right, the administration said they’ve always expected people to wait. And especially now that all these website problems were publicized so much, and were really such issues for people, that people would wait for them to get fixed. So they really expect people to come in now, in December, and then again in March when the final deadline is March 31st. The secretary said today that several million people had visited healthcare.gov in the first week of December alone. So they see those website visits, those calls to the call centers, as evidence people are really interested in this. They may have been holding back, but now they’re going to go for it.

MARY AGNES CAREY: But, the federal government has had to spend some extra money to fix these “bumps and glitches,” as they’ve been described. What did she tell the committee about how much has been spent so far?

EMILY ETHRIDGE:  She said that so far they have obligated — so they planned to spend — ideally $667 million for the implementation and they have not spent all of that. They think they’ve spent about half of it so far, she said, about $319 million was her number for that. So it’s quite a lot of money.

MARY AGNES CAREY:  So they will continue to spend money to fix ongoing issues as they occur. She also talked a little bit about some steps that she’s taking, and the department is taking, to find out what went wrong. To find out why the website didn’t go so smoothly as of Oct. 1. What are some of those initiatives?

EMILY ETHRIDGE:  One thing she’s asked the inspector general for HHS to go in and review contract performance and all of the management structure to determine what really led to these problems. She has also asked the CMS administrator to create a new full time position of a chief risk officer at that Centers for Medicare & Medicaid Services. That person will look at IT projects and mitigate risk in them throughout all the agency’s programs — but really focus first on healthcare.gov, what went wrong, how can we fix it, how can we prevent this from happening in the future?

MARY AGNES CAREY:  I’d like to close with a question about the mood of today’s hearing. You and I were both there at the end of October, when Secretary Sebelius was in front of a full House Energy & Commerce Committee. It was a much more combative feel. The room was more packed. There were more reporters, more television cameras. Again, the members seemed to have a different sort of line of questioning at that hearing versus today, which seemed to me more subdued. Do you think that was the case?

EMILY ETHRIDGE:  It absolutely was. The audience wasn’t packed like it was before. We had fewer people there, fewer bright lights, fewer cameras. You really saw the lawmakers respond to that. There still were some heated questions and a couple of outbursts, but overall it was much more restrained and a little more, I would say, serious than some of these previous hearings with Sebelius. That could show that — she seemed more comfortable. Maybe she’s really getting into the swing of things here and might have a slightly smoother path from here on out.

MARY AGNES CAREY:  What do you think that means for the Republican attack against the Affordable Care Act? Is the strategy shifting?

EMILY ETHRIDGE:  The Republicans lost a big opportunity now that the website has really started to work better and the administration says it has met its goal of having it run smoothly by Nov. 30. If that had been missed, I think we would have had another really combative hearing again. But they didn’t have that line of attack this time at their disposal. So they’re trying to find the other problems that are really happening. Again, we’re going to have to see if those develop into being real problems that people are going to be experiencing — if anything new pops up. Or if they might fizzle out.

MARY AGNES CAREY:  Thanks so much, Emily Ethridge of CQ Roll Call.