Politico Pro’s Matt DoBias and KHN’s Mary Agnes Carey examine what led to the super committee’s failure to cut a deal and discuss what it means for hopes of a permanent “doc fix.” 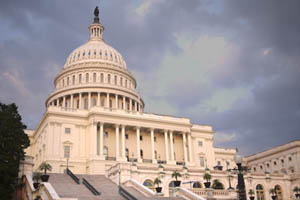 MARY AGNES CAREY:  Good day.  This is Health On The Hill.  I’m Mary Agnes Carey.  Despite last-minute attempts to cut a deal, Capitol Hill’s super committee announced today that it could not find compromise on a package of $1.2 trillion in spending cuts over the next decade.  Politico Pro’s Matt DoBias has the details.  Thanks for joining us, Matt.

More On What Happens Next

MARY AGNES CAREY:  The super committee’s co-chairs released a statement ending their negotiations.  What did they say?

MATT DOBIAS:  In the written statement they were actually very complimentary of each other.  They used the term that they were deeply disappointed to describe the way they felt about not being able to reach a deal. They also mentioned that they remain hopeful that Congress can build on their work to find new ways to reduce the deficit. But all of that is in a written statement.

They were a little more pointed in public statements that they made really throughout the weekend.  I think the finger pointing was a little more pronounced.  And basically it came down to this:  The same old bugaboo that has hindered other deficit-reduction efforts, and that is that Republicans said that Democrats really weren’t willing to move on entitlement programs, and Democrats in return said Republicans weren’t really willing to move on new tax revenues.

MARY AGNES CAREY:  Several panel members did meet today to try to have a last-minute deal.  Who was in those meetings, and what did they talk about?

MATT DOBIAS:  It was a flurry of activity on a day when we had all pretty much figured it was going to be a post mortem for the committee.  A clutch of bi-partisan senators had met, including Sen. John Kerry, Max Baucus, the chairman of the Finance Committee, was in those talks as well.  I also believe Congressman Chris Van Hollen from Maryland, also a Democrat, was a part of those discussions.

At the same time, Republican members of the committee were meeting. There was kind of a last-minute kick-save of a deal that looked to be like a smaller package – anywhere from $250 billion to about $300 billion, I think, were some of the numbers we were hearing – that would have been just a smaller, all-cuts-type package.  But from our understanding, that was something that was going to be roundly rejected by Republicans, sort of a dead-on-arrival, last-minute attempt to salvage some part of this deficit-reduction process.

MATT DOBIAS:  If I was a betting man – and you and I have covered these negotiations for a while, and we have seen those eleventh-hour saves.  But this time it was different.  In those previous efforts, when you were looking at the congressional effort to raise the debt ceiling, you had a moment where the president was involved in the discussions. The top leaders were involved in those discussions. And there was a lot of pressure from the general public, as well, who were really perhaps driving the debate more than the lawmakers on Capitol Hill.

But with this process you had this threat of what they call a sequester – these are these automatic cuts that would go into play in 2013 if they couldn’t – and as we know now today that they weren’t able to make a deal.  But it seems to be a little more squishy, those across-the-board cuts that would hit health care and also defense.  And I say “squishy” meaning this: You have all of 2012 basically to kind of work and play with what they call the sequester.  And I think that was enough to give the committee some leeway so that they can walk away from this process without the kind of heavy heads that we’ve seen from previous efforts that didn’t quite cross the finish line.

MARY AGNES CAREY:  Physician groups had really hoped to get a sweeping “doc fix” as part of a super committee deal.  That’s not in the cards now, so what’s their next move to stop a payment cut of nearly 30 percent in January?

MATT DOBIAS: I think their best bet for a full repeal had to have come from the super committee; obviously that’s not going to happen.  And so, moving forward, they have to get the fix.  We know that Congress always steps in at the eleventh-hour, at the 11:30th hour sometimes, they’re able to make this deal – and they’ve even done it retroactively.

But as one health care lobbyist told me today, this now marks the return to regular order. And what he means by that is this idea of the doc fix – reversing these double-digit pay cuts that kick in Jan. 1 – is going to go through the committee process like it typically does.  And this is going to be on the House side: the Energy and Commerce and Ways and Means Committees.  On the Senate side it’s going to be Finance.

It’s not going to be the full repeal that they wanted; that’s got a $300 billion price tag attached to it.  And really, that money really could have only come in the broader deficit-reduction scheme.  So you’re looking at now anywhere from a one to three year patch.

Now, there are several proposals, and lawmakers from both sides of the aisle have really been working on ways to creatively get them their doc fix.  Some of those proposals include one to two, maybe even three years of stable payments while physicians test out new payment models, new practice models – kind of moving towards something that is different than this dreaded SGR, the sustainable growth rate, which is the Medicare formula that leads to these cuts, year-in and year-out for physicians.

The trade-off is that they’re not getting the full repeal that (it’s not just physician groups) I think any health care group and pretty much any member of Congress will tell you that they would like to have.  That money just simply isn’t there outside of the super committee.  But I’ve been assured that there are “pay-fors” out there finding the right calibrations to pay for this.  This is going to be anywhere from a mid-$20 to high $30 billion fix.  Lawmakers will tell you that there are “pay-fors” that are out there; it’s just a matter of finding the right mix.

Health On The Hill: Why The Super Committee Struck Out And The Impact On The ‘Doc Fix’