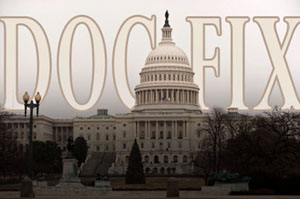 MARY AGNES CAREY: Congress is one step closer to repealing the Sustainable Growth Rate, or SGR, Medicare’s physician payment formula. Today key House and Senate committees approved legislation to repeal the formula and replace it with a different way to pay doctors who treat Medicare beneficiaries.

Politico Pro’s Jennifer Haberkorn is covering that story and joins us now. Thanks for being with us.

JENNIFER HABERKORN, POLITICO PRO: Thanks so much for having me.

Today the Senate Finance Committee and, in the House, the Ways and Means Committee voted on a bipartisan basis to repeal the Medicare physician payment formula, also known as the SGR. How are those aproaches the same, and how do they differ?

JENNIFER HABERKORN: These bills are very similar. Both of them change the way that doctors are paid under Medicare and eliminate the Sustainable Growth Rate. That’s the old formula under which Medicare pays doctors. Neither of them are paid for, which is going to be a significant issue, particularly for Republicans. And one of the big differences in the bills is that there’s a permanent fix to a series of provisions that come up every year in Medicare that deal with limits on things such as physical and occupational therapy caps.

The [Senate] Finance [Committee] bill addresses some of these, but the House Ways and Means bill does not.

MARY AGNES CAREY:  Would physicians get any kind of payment increase in these bills once the SGR were repealed?

JENNIFER HABERKORN:  There’s a small increase in the payments in the House plan but not in the Senate plan. That difference is going to have to be addressed as the bill moves forward.

JENNIFER HABERKORN:  The idea here is to move away from paying a provider for each test or therapy that they provide and instead addressing quality. So addressing “Is the patient adequately cured or is their condition addressed?” So physicians and hospitals would have to meet quality metrics to get paid. They’d get paid more if they meet these metrics, and their pay would actually be cut a little bit if they don’t.

MARY AGNES CAREY:  Do they doctor groups agree with these bills?

JENNIFER HABERKORN:  For the vast part yes. They say that they have issues with this legislation, particularly that their pay will be frozen for 10 years while this new system is put into place. But they want this Sustainable Growth Rate to be repealed. That’s their overriding goal, and for that reason they support the legislation.

MARY AGNES CAREY:  You mentioned earlier that neither one of these bills is, as we say in Washington, the “pay-fors” aren’t there. They haven’t said yet how they’re going to pay for it. What are some of the likely “pay-fors”  that they would use, and when would we see them?

JENNIFER HABERKORN:  We’ll see this before the legislation hits the House or Senate floor. There is likely going to be a significant debate over how to come up with this money. They’re probably going to have to come up with $150 billion. And we can expect that money to come from within the health care system.

Other providers such as hospitals are already concerned and already trying to set the ground work for telling Congress that they don’t want to have to pay for this repair. But we can expect it to be within the health system.

MARY AGNES CAREY:  Currently, the Sustainable Growth Rate, or SGR, calls for about a 24 percent payment cut to Medicare physicians, as of Jan. 1. And, as they do every year, Congress has found a way to get around that. There’s a short-term patch, as we call it, moving now through the House, and then probably through the Senate. What would that do?

JENNIFER HABERKORN:  This patch would prevent physicians from seeing payment cuts for three months. It would be funded by additional cuts in long-term care hospitals and extend the Medicare sequestration cuts.

It would also cut how Disproportionate Share Hospitals — or the hospitals that see the sickest patients — are paid.

It will go into effect for three months, and in that time lawmakers are hoping to implement the long-term repeal of the Sustainable Growth Rate, which would prevent a future patch from being necessary in the future.

MARY AGNES CAREY:  Thanks for your help, Jennifer Haberkorn of Politico Pro.