STERLING, Colo. — Tonja Jimenez is far from the only person driving an RV down Colorado’s rural highways. But unlike the other rigs, her 34-foot-long motor home is equipped as an addiction treatment clinic on wheels, bringing lifesaving treatment to the northeastern corner of the state, where patients with substance use disorders are often left to fend for themselves.

As in many states, access to addiction treatment remains a challenge in Colorado, so a new state program has transformed six RVs into mobile clinics to reach isolated farming communities and remote mountain hamlets. And, in recent months, they’ve become more crucial: During the coronavirus pandemic, even as brick-and-mortar addiction clinics have closed or stopped taking new patients, these six-wheeled clinics have kept going, except for a pit stop this summer for air conditioning repair.

Their health teams perform in-person testing and counseling. And as broadband access isn’t always a given in these rural spots, the RVs also provide a telehealth bridge to the medical providers back in the big cities. Working from afar, these providers can prescribe medicine to fight addiction and the ever-present risk of overdose, an especially looming concern amid the isolation and stress of the pandemic.

Mobile health clinics have been around for years, bringing vision tests, asthma treatment and dentistry to places without adequate care. But using health care on wheels to treat addiction isn’t as common. Nor is equipping such motor homes with telehealth capability that expands the reach of prescribing providers to treat hard-to-reach patients in these hard-to-reach rural areas.

Each RV has a nurse, a counselor and a peer specialist who has personal experience with addiction — and all had to be trained to drive a vehicle that size.

“I never thought when I went to nursing school that I’d be doing this,” Christi Couron, a licensed practical nurse, said as she pumped 52 gallons of diesel fuel into the motor home she works on with Jimenez.

The crew has driven their RV more than 30,000 miles since January, much of it viewed through a cracked windshield courtesy of a summer afternoon hailstorm. Four days a week, they ply the roads from Greeley to the smaller towns near the Nebraska border, as the view goes from mile-high to miles-wide.

Don a Mask, Pee in a Cup

On a dusty lot outside a halfway house in Sterling, Jimenez, the peer specialist, activates the leveling jacks to balance the RV, and the team readies the unit for the day’s slate of patients. The passenger-side captain’s chair flips around to face a table where Jimenez will check in patients. The tabletop is crowded with a printer, a scanner, a laptop and a label-maker. Underneath lie a box of specimen cups and a gallon of windshield washer fluid. The vehicle now has plenty of masks and cleaning supplies on hand, too.

After patients check in, they go to the RV’s snug bathroom to provide a urine sample. With test strips built into the sides of the cup, results show instantly whether any of 13 categories of drugs — from opiates to antidepressants — are in the urine. The sample is later dropped off at a lab to confirm the results and determine which specific drug is involved. The results help the team understand how best to treat the patients and make sure they use the prescriptions they’re given.

Patients then head to a small exam room in the back, where they connect via video to a nurse practitioner or physician assistant in a brick-and-mortar clinic. 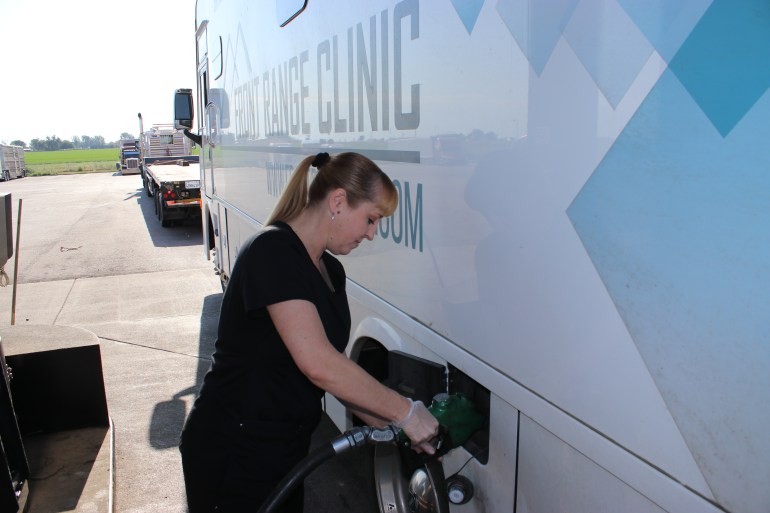 Each RV has a nurse, a counselor and a peer specialist — all trained to drive a 34-foot-long motor home. “I never thought when I went to nursing school that I’d be doing this,” says Christi Couron, as she pumps 52 gallons of diesel fuel into the mobile clinic. (Markian Hawryluk/KHN) 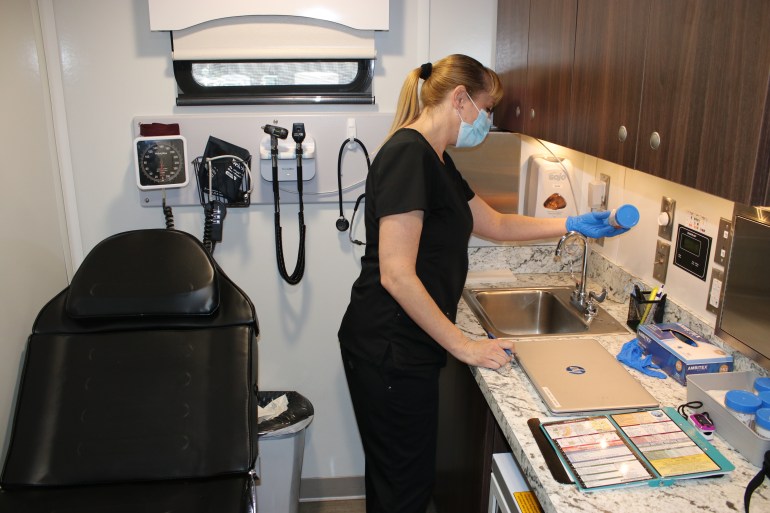 Christi Couron, a licensed practical nurse, preps urine samples in the mobile addiction treatment clinic to send to the lab. Test strips within the specimen cup give an early assessment by instantly detecting 13 categories of drugs — from opiates to antidepressants. Patients visiting the RV can also connect via telehealth to medical providers who can prescribe medicine to fight addiction. (Markian Hawryluk/KHN)

If all goes well, the provider will send over a prescription for Suboxone (a combination medicine containing buprenorphine, which reduces cravings for opioids) or for Vivitrol (a monthly injectable version of naltrexone, which blocks opioid receptors). Once the staffers have the prescription in hand, the RV nurse can give those Vivitrol shots directly and distribute Narcan, a medication that will reverse an opioid overdose. Suboxone prescriptions must be called into a local pharmacy.

Patients also can drop used needles into a sharps container for disposal, but the staffers are not allowed to distribute clean needles. Some patients will talk with counselor Nicky McLean in a room just large enough to fit a table and two chairs.

Within minutes, a couple, who asked not to be identified by name because of the stigma surrounding addiction, arrive early for their appointments. They’ve brought the staff homemade chicken enchiladas. They had been spending $8,000 a month buying OxyContin on the street, and their lives and finances were a wreck. He lost his house. She needs clean urine tests to see her son. The couple started their addiction treatment only three weeks earlier, after he learned about the RV clinic from a friend.

They no longer have a car, so they walked a half-hour to get to their appointment.

“We would’ve done anything to get our drugs,” she said. “Walking 30 minutes to get better, it’s worth it.”

Even before they’ve finished, another patient is at the door. Spencer Nash, 29, has been using opioids since he was 18. Nine years ago, when his wife got pregnant, the couple decided to get clean, driving two hours each way, six days a week, to a methadone clinic in Fort Collins. Now, he walks to the RV, outside the halfway house where he lives, to get his Suboxone prescription.

A few years ago, Robert Werthwein, director of Colorado’s Office of Behavioral Health, heard about a project using RVs for addiction treatment in rural upstate New York. He thought it would work in his state, too. The agency crunched the numbers to see which regions recorded the highest levels of opioid prescriptions and overdoses but lacked addiction treatment.

“We hear too often that in rural Colorado and the mountain regions of Colorado they don’t have the same access to services as the Denver metro and the Front Range regions,” Werthwein said. The state secured a $10 million federal grant for the program. His team brought in health care providers, such as Front Range Clinic, to staff and operate the RVs.

Once the RVs were ready, the staff had to be trained to drive them, which necessitated “a couple of repairs,” Werthwein said. The vehicles first started rolling out in December, eventually serving six regions — and in a seventh area, a place where narrow mountain roads precluded a large RV, one of Werthwein’s teams travels by SUV.

In some communities, the local doctors and others have been less than thrilled, feeling the RVs would attract drug users to their town.

“We’re hoping to address stigma, not just from a public standpoint, but we’re hoping to show providers ‘there is a demand in your community for medication-assisted treatment,’” Werthwein said.

Once the federal grant runs out in September 2022, Front Range Clinic and the other mobile unit operators will inherit and continue to operate the RVs, billing Medicaid and private insurance as they do now for the appointments.

As the RV crew’s 1 p.m. departure time in Sterling approached, one patient remained. The woman, who asked that her name not be published because she didn’t want to be publicly identified as a drug user, arrived at the mobile clinic without an appointment. But they couldn’t take her as a new patient without a urine sample. For two hours, she was in and out of the bathroom, drinking bottles of water, but unable to fill the little plastic cup. Through the bathroom door, the staffers could hear her crying and cursing at herself.

With the battery power on the RV winding down, they coaxed her out of the bathroom. Perhaps tomorrow would work better, they told her. She could continue to rehydrate through the night and then meet the mobile unit at its next stop, Fort Morgan, some 45 minutes away.

The next day, she was still unable to produce a urine sample, whether because of dehydration from her substance use or simply nerves. They asked her to come back again when the RV returned to Sterling the next week, but she never showed up.