Public support of last year’s health care law hit an all-time low in October as many Democratic voters lost confidence that one of President Barack Obama’s major programs will improve their lives, a new poll finds. For the first time, as many people believe the law won’t make the country better off as believe it will.

The poll found that 51 percent of the public now dislikes the law and only 34 percent favor it. The scores were the least favorable in the 19 months the Kaiser Family Foundation has been tracking public perceptions. (Kaiser Health News is an editorially independent program of the foundation.) 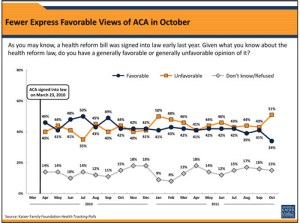 The public’s souring on the law is mostly due to a decrease in backing from Democrats, the poll found. When the Affordable Care Act was signed into law in March 2010, 78 percent of Democrats supported it. In October, only 52 percent did. That was a 13 percentage point decrease just from September and the most tepid enthusiasm to date among Democrats.

The pollsters surmised that much of that dissatisfaction was due to pessimism among Democrats that the law would help them and their families. Only 27 percent of Democrats in October thought it would improve their lot, down from 43 percent in September. Twice as many Democrats — 55 percent — now believe the law won’t make much difference in their lives. Even the Democrats who still support the measure remain less passionate about it than are the Republicans who oppose it. 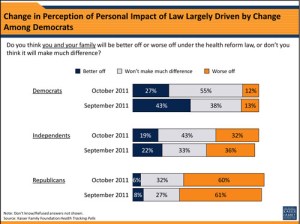 Support of the law among independent voters also ebbed to a new low — only 32 percent of independents had a favorable opinion about it in October. Republicans remained unenthusiastic about the law, with only 11 percent believing it was a good thing. Among all voters, 29 percent believed the law won’t make much difference for the country as a whole—an 11 percentage point jump from September.

The poll results may boost concerns about the strategy Obama and Democrats took in passing the law but delaying many of its major provisions until 2014. At the time, Democrats hoped that a few concrete provisions taking effect within months would whet voters’ appetite for the bigger changes down the road. Those initial changes included letting dependent children remain on their parents’ insurance policies until age 26, and giving some Medicare recipients more financial assistance in buying prescription drugs.

But the bigger changes, including new subsidies and rules intended to allow Americans with spotty medical histories and those of modest finances to be able to buy insurance, won’t kick in until more than a year after next year’s presidential election. The foundation also queried voters about the health care law Massachusetts passed in 2006 when the governor was Mitt Romney, now a Republican presidential candidate. The poll found most people don’t know enough about the law to offer an assessment.