With the Supreme Court just two months away from hearing a historic legal challenge to the 2010 health law, nearly 60 percent of the public expects the justices to depend more on personal ideology than a legal analysis of the individual mandate, according to the Kaiser Family Foundation’s January health tracking poll.

Just 28 percent of those surveyed believe the justices will base their decision on the mandate without regard to politics and ideology, according to the survey.

The poll also asked about general views of the Supreme Court and found three quarters of the public believe that justices sometimes let their ideological views influence their decisions. Seventeen percent of those surveyed say justices usually decide cases based on legal analysis. The court will hear oral arguments in March in a case brought by 26 states and others. 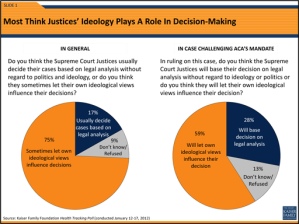 (Kaiser Health News in an editorially-independent program of the foundation.)

As the Republican presidential nomination fight continues, the poll also found that most Republicans are not swayed by charges from GOP contenders that former Massachusetts Gov. Mitt Romney holds health policy views similar to those of President Barack Obama. Romney’s opponents have repeatedly criticized him for signing a 2006 Massachusetts law that is similar in some aspects to the federal health law. But the poll found that 49 percent of Republicans say the two men’s views are different, while three in 10 say they are similar. Twenty-two percent had no opinion.

However, when asked specifically for their opinions about the 2006 Massachusetts health law, 69 percent of likely GOP primary voters responded that they didn’t know enough to say whether they viewed the law favorably or unfavorably. Furthermore, 64 percent of these voters said they don’t know enough to judge whether the Massachusetts law is similar to or different from the 2010 federal health law.

The poll also found that the individual mandate, a requirement that most Americans purchase health insurance by 2014 or pay a fine, remains unpopular, with 67 percent of Americans having an unfavorable view of the provision and 30 percent supporting it. 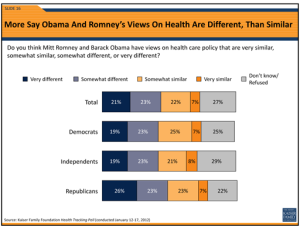