Last minute health insurance shoppers nationwide turned up in record numbers online Monday, and they also showed up in person at clinics, county health departments and libraries to sign up for Obamacare on the last official day of open enrollment. Here are dispatches from public radio reporters in Ohio, Pennsylvania and Houston — three of the 36 states that are using healthcare.gov — and Minnesota, which has one of the most troubled state-run marketplaces.

OBSTACLES IN CLEVELAND:
A steady stream of people filed through the doors of the Neighborhood Family Practice, a  free clinic on Cleveland’s near west side Monday, but Leah Pallant, an outreach and enrollment coordinator at the clinic expected many of them to leave without actually selecting a plan before the midnight deadline.

“The website is already in and out,” Pallant said. “The number of people on the website really made it difficult to keep working, because it basically just shuts you out entirely when they have too many visitors.” 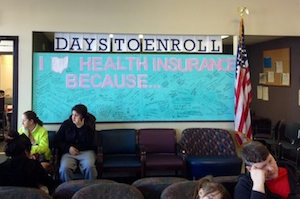 Care coordinators constructed an inspirational billboard for folks signing up at the Neighborhood Family Practice (Photo by Sarah Jane Tribble/WCPN).

Federal officials said more than 1.2 million people from around the country had visited by noon Monday, and the site was handling as many as 125,000 people at a time. The site was down from about 3:20 a.m. until 9 a.m. for maintenance and then again later midday; at other points during the day it shunted people into a “virtual waiting room.”

Coordinators in Ohio and across the country encountered many of the same problems as people trying to sign up at home.

Pallant’s colleague, coordinator Jackie Mostow, was working with Cleveland resident Callie Williams. “We can try,” Mostow told Williams, “but what we might end up doing is trying to create an account and we’ll schedule you an appointment to come back.”

Williams, who hasn’t had insurance since the 1990s, said she is willing to wait a bit longer. “Just schedule me an appointment to come back,” she said.

Joyce Jones, who works two part-time jobs, arrived at the clinic late Monday morning after trying to use the website on her own. “I didn’t like what I was seeing because as you look at the deductibles, all I can say is ‘wow,’ because you have to pay all that before your bill even gets paid,” Jones said. “So that’s why I chose to come in to talk about it and see if I can get a better plan.”

In Ohio, 83 percent of those who have signed up for plans on the exchange have qualified for financial assistance. And Jones will have more time to shop due to another late change in the rules. Federal officials have said they will grant extensions to those who tried to start an application on the website and couldn’t finish.

But a crush of last-minute enrollments over the past few days could push the final tally much higher, and city officials announced that six community centers would stay open until 10 p.m. Monday to allow people more time to try to enroll.

At the city’s service center on the southwest side Monday afternoon, more than 200 people were crowded into the lobby, and down two hallways. There were seven health care navigators on site, according to Solly Diaz, a division manager for the city.

“We expected, and we braced ourselves for it,” Diaz said. “We definitely ramped up our capacity. But even with that, the volume of walk-ins that we got was truly overwhelming.”

Navigators like Sandra Rodriguez helped clients do the bare minimum: set up an account, which would at least qualify them for an extension until mid-April. Around 2 p.m., Rodriguez turned from her keyboard, announcing a digital breakthrough.

The lucky client at that moment was Pamela Thompson, 50, a food worker in the Cy-Fair school district. Thompson recently found out she has high blood pressure, and she also had the flu this winter.

“I’ve been needing insurance because, you know, I stay sickly lately,” she said.  “And when I want to go the doctor I have to pay out-of-pocket to go.”

Thompson’s income hovers near the poverty line, between $11,000 and $12,000 a year. Rodriguez warned Thompson she might fall into a gap under the law: she might not earn enough to qualify for an insurance subsidy, and Texas isn’t offering Medicaid to poor adults in her income range.

Across the city, Francisco Juarez was waiting for help at the Multi-Service Center in Denver Harbor. Jaurez, 55, works for a small metal fabrication company. “They’ve been promising us insurance and to this day we still don’t have any,” he said.

Juarez has heart trouble and diabetes. But he hasn’t seen a cardiologist in nine months, and he can’t afford his prescriptions. “My heart,” he said softly. “My heart’s only 25 percent, and I’ve got three clogged arteries. So it’s pretty serious. I need to get some insurance somewhere.”

Juarez clutched a folded paper with his account information from healthcare.gov.  He had left work early, without telling anyone where he was going, hoping to see a navigator who could help him choose a plan before the deadline.

BILINGUAL HELP IN PHILADELPHIA:
By midafternoon Monday, at Latino service agency Congreso in North Philadelphia, about 50 people were signed in, the list growing, waiting to meet with Congreso’s bilingual staff.

“Actually, what you see here right now is half of what was here earlier this morning,” said Jose Rivera, Congreso’s vice president of health services.

Rivera says he’s excited they’ve been able to connect with so many people, even as Latino enrollment nationwide appears to be low. Twenty employees have become certified application counselors at Congreso, according to Rivera, in addition to their regular jobs. Counselors reported long waits getting through to the Spanish-speaking help line on Monday.

Elvia Mejia,64, is holding out hope that she’ll be able to sign up. She’s uninsured, diabetic, and has struggled to pay for medicine costing upwards of $500 a month on her own. Mejia joined family living in the United States three years ago, and while she may not be eligible for other federal health programs until she has been in the country for five years, the Affordable Care Act has no time requirement for immigrants in the country legally to be eligible for financial assistance purchasing coverage through the marketplace, if their income qualifies.

MINNESOTA TAKES A BREAK:
MNsure, the agency that runs Minnesota’s online insurance marketplace, will take the website offline for about 48 hours starting at midnight Tuesday to perform site maintenance. It is scheduled to come back up on Thursday morning. The contact center will remain open.

The troubled exchange had braced for high volume Monday and procrastinators didn’t disappoint them, as the call center fielded a record 16,000 calls.

The website slowed, but it did not buckle as it did Dec. 31, the last big deadline for enrolling in coverage. On that day, frustrated Minnesotan overwhelmed the call center.

But Monday’s rush showed that the MNsure website has improved.

“We’ve added additional capacity for the surge to the site to ensure that people are able to get in and that the system itself can handle additional volume,” interim CEO Scott Leitz said. “Beyond that, we’re monitoring by the minute the stability of the site and where things are at.”

Counties have a separate access point to MNsure called a worker portal, which they use to review applications to government programs such as Medical Assistance.

Linda Bixby, economic support division manager for Washington County Community Services, said county workers still can’t make the most basic changes to a person’s case. For example, they cannot change an address or close a case for someone who has found a job that provides health insurance. “I personally have serious concerns about the functionality,” she said.

MNsure officials say there are still hundreds of people stuck in insurance limbo, whose cases are deemed “pending.”

One of them is Susan Leem of St. Paul, a married mother of two, whose current insurance expires on Tuesday. On March 6, when she first applied, the MNsure site said her husband qualified for MinnesotaCare, a plan for “residents who do not have access to affordable health care coverage.” The site said she and the children qualified for Medical Assistance, the state’s Medicaid program, but Leem doubts that because of her income. She needs coverage to begin Tuesday, but her case is still pending.

“For me it’s the not knowing,” she said.

“If they end up having to go to the doctor or the emergency room, we can work with them to make sure that if they’re eligible for one of our public programs, that they’re getting the coverage they need and it will be retroactive,” Human Service Commissioner Lucinda Jesson said.

But the possibility of retroactive coverage doesn’t give Leem peace of mind. As she cradles her infant son in her lap, she still worries.

“If I get into a car accident and I need emergency surgery and they ask my husband where is your medical card, can he say, pending ‘MNcare?'” she asked. “Maybe they’d reimburse me later; maybe they wouldn’t if my paperwork was not deemed eligible or correct.”

This story is part of a reporting partnership that includes NPR, member stations and Kaiser Health News.