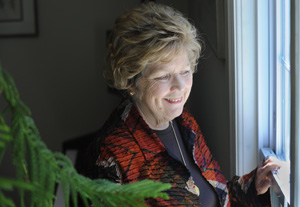 Judy Currier in her home in Springfield, Va. (Katherine Frey for The Washington Post)

Judy Currier remembers waking up the morning after doctors spent hours cauterizing tissue inside her heart. They were trying to correct a rapid, irregular heartbeat that had left her exhausted, frequently out of breath and at a higher risk of stroke.

“I was amazed at how quiet my heart was,” says Currier, a 69-year-old resident of Springfield,Va. But the benefits of the treatment, called catheter ablation, didn’t last. Soon her heartbeat became erratic again, forcing her to ask: What should I do?

That’s the dilemma facing more than 2.2 million Americans who have atrial fibrillation, the most common heart arrhythmia and one of the most vexing to control. While treatments ranging from medication to surgery are proliferating – and often are marketed aggressively by hospitals – no one can say with certainty which will work best for any individual patient. And each treatment has side effects, some of them serious.

“We don’t have great evidence to help patients and doctors make a fundamental choice among the treatment options, which differ dramatically,” says Steven Pearson, president of the Institute for Clinical and Economic Review, which evaluates medical treatments and is affiliated with Harvard Medical School.

A Look At Comparative Effectiveness Research

That makes A-fib, as it’s commonly called, a top candidate for comparative effectiveness research, say Pearson and other experts. Congress set aside $1.1 billion last year for this type of research, which involves head-to-head testing of drugs and treatments to determine which work best, and for which types of patients. Advocates say such research will improve health care and help get costs under control.

More information about A-fib therapies, for instance, would allow doctors to customize treatment for specific patients, says Harold Sox, a prominent internist who headed an Institute of Medicine committee advising Congress on how to spend the comparative effectiveness research funds.

The committee issued a report recommending that atrial fibrillation should be a top candidate for such funding when it is given out by the government in the coming months.

But sometimes there is no evident cause. The heart quivers, or fibrillates, rapidly, for a few minutes, days or even weeks. During A-fib, the heart doesn’t pump as effectively, which allows some blood to pool in the heart, potentially forming stroke-causing clots. In some patients, the condition comes and goes; in others, it’s constant.

A-fib is different from heart attack: Some people never even know they’re experiencing the condition. It is not in and of itself life-threatening, although prolonged A-fib increases the risk of stroke, and the symptoms, from palpitations to shortness of breath, can be frightening.

There are several main ways of treating the condition:

After her diagnosis, Currier was prescribed medication to control her heart rate. About six weeks later, she noticed that she got short of breath while walking. She saw her cardiologist and another doctor who specializes in lung problems. The two doctors disagreed about whether her problem was her lungs or her A-fib. “They started arguing, and I thought I was going to go crazy,” says Currier, who ran her own systems analysis business before retiring.

Over time, she took more than six drugs to control her heart rate or rhythm. “Most would work for a few days or a few weeks, then stop working,” says Currier. So she had catheter ablation in June 2005.

Within 24 hours of the procedure, Currier says, her heartbeat was irregular again. She continued to go in and out of A-fib for the next year. During that time she had her first electric shock cardioversion. “It worked, but two days later, I went into A-fib again,” says Currier. She had a second cardioversion. When she learned in the recovery room that it had failed, she sobbed, believing she’d have A-fib the rest of her life.

Five years later, she remains in A-fib constantly. She takes drugs to control her heart rate and a blood thinner. She considered surgery, but lung issues made the minimally invasive kind impossible, and she felt the open-chest kinds posed too many risks and required too long a recovery time. She has given up her passion, solo sailing, fearing that something might go wrong when she’s far from shore. She also can’t swim for exercise in her local pool as much as she used to. She still enjoys line dancing, but she gets breathless before finishing even one number.

Smock, 71, a retired federal employee who lives in Fairfax, was told that he had A-fib in 2003. He had become increasingly frustrated with his inability to do yard work or shovel snow. Just climbing stairs left him out of breath. His biggest fear, though, was stroke, which killed both his parents.

Drugs worked for only a limited time. And an enlarged left atrium reduced the odds that catheter ablation would help, his doctor said. So Smock opted for surgery, in which surgeons would not only attempt to fix the A-fib but also lop off an appendage of the heart thought to be the source of many of the clots that can cause A-fib-related strokes.

“I don’t want to be 75 or 76 and facing surgery, when I might have more medical problems,” says Smock, who scheduled the treatment for Feb. 19 this year, hoping to celebrate his birthday in the hospital, “cured” of A-fib.

During tests leading to his scheduled surgery date, Smock learned there were problems with his heart’s mitral valve, which also would be fixed during the procedure.

Four days after the surgery, Smock noticed a clicking noise in his chest. Doctors found that wires holding together his sternum, which must be split during the surgery, were not holding properly because his bones were so brittle. He had a second surgery to fix that. An expected five-day hospital stay turned into 18 days. Three months after his surgery, Smock’s A-fib has vanished and he says he’s no longer reliant on blood thinner or heart rhythm drugs. “That was part of the deal, as far as I was concerned, not to have to take those things for the rest of my life.”

True Hills discovered her A-fib after returning home to Texas from a business trip one night in 2003. She felt tired and dizzy, and one of her legs was white and “cold as snow,” she recalls. The next morning, True Hills went to an emergency room, where doctors found blood clots in her leg and diagnosed her problem as A-fib. She was 51.

They put her on several drugs, including the blood thinner Coumadin to help prevent blood clots. Most A-fib patients take some form of blood thinning medication to reduce the risk of clots. But it can be tricky to get the dose right: too much and the patient risks serious bleeding, too little and the blood might clot, which can cause stroke.

“I was never stable on Coumadin,” says True Hills. That meant she needed blood tests once or twice a week and she was warned not to do yard work, use sharp knives or even shave her legs.

Determined to get off Coumadin and other medications, True Hills decided in 2005 to have the minimally invasive type of maze surgery. She spent three nights in the hospital, and was able to return to work in about a week. She had to stay on Coumadin for a few months after surgery, until tests showed she was no longer in A-fib. She got word that it was fine to stop taking the drug on Christmas Eve, “the best present I ever had,” she says.