AKRON, Ohio — Just before the Fourth of July, Trenton Burrell began feeling run-down and achy. Soon he could barely muster the energy to walk from one room to another. A friend shared an alarming observation: “You’re turning yellow.”

Within days, the 40-year-old landed in the hospital, diagnosed with the highly contagious liver virus hepatitis A, which in Ohio has infected more than 3,220 people and killed at least 15.

Since 2016, the virus has spawned outbreaks in at least 29 states, starting with Michigan and California. It has sickened more than 23,600 people, sent the majority to the hospital and killed more than 230. All but California’s and Utah’s outbreaks are ongoing, and experts expect to eventually see the virus seep into every state.

Like a shadow, it follows the opioid epidemic, spreading mostly among drug users and the homeless. But anyone who hasn’t been vaccinated can get hepatitis A — as Akron health officials are finding out. 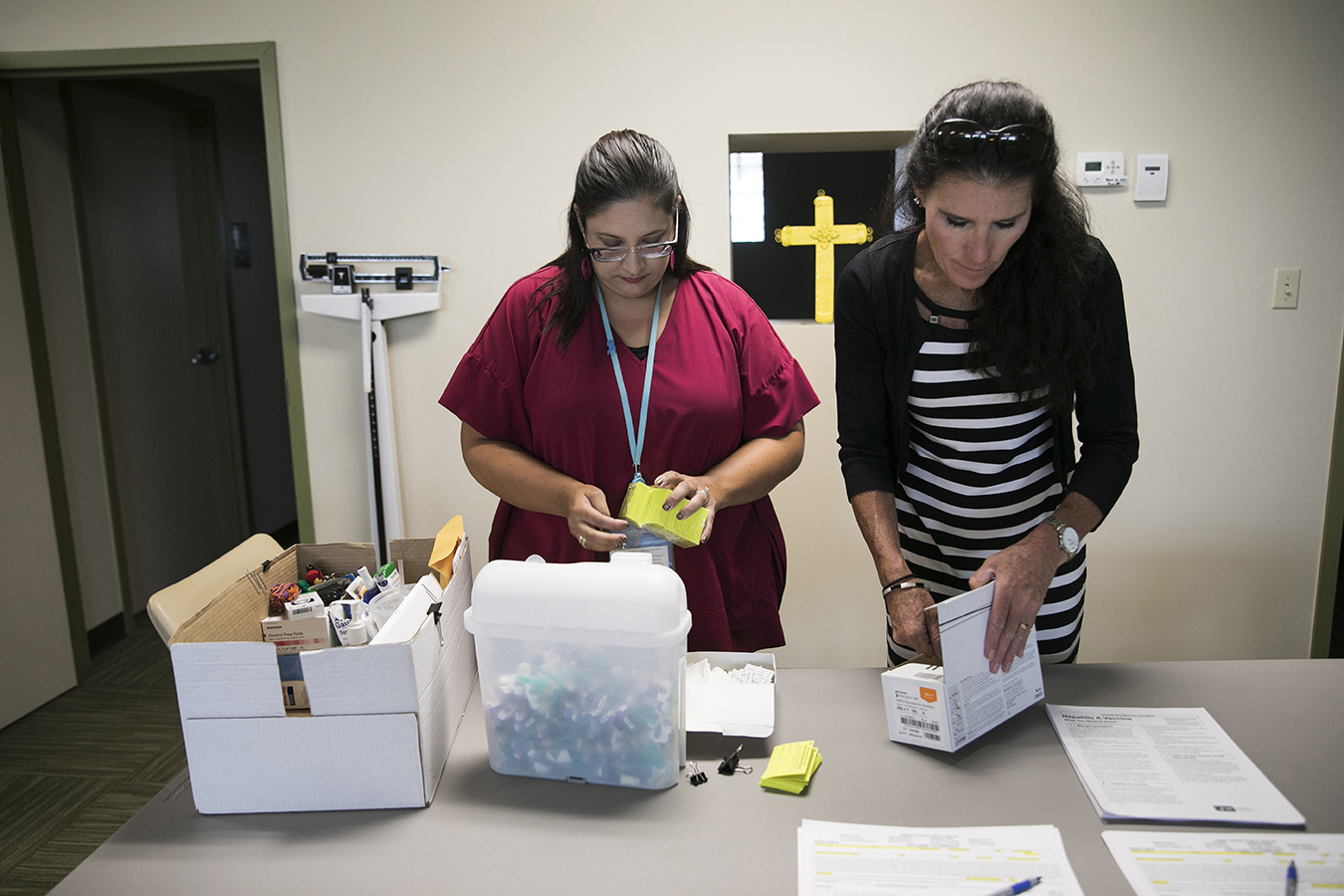 Summit County Public Health nurse Rachel Flossie (left) and communicable disease supervisor Tracy Rodriguez prepare to give vaccinations to clients during a South Street Ministries program in Akron, Ohio, last month. In the wake of the opioid crisis, the highly communicable hepatitis A virus is spreading in more than half the states, including Ohio. “It’s getting into the general public,” Rodriguez says. “It’s scary.”(Maddie McGarvey for KHN)

Hepatitis A thrives in unsanitary conditions and spreads as easily as a stomach virus: People ingest minuscule amounts of an infected person’s stool from food, drinks, drug equipment or objects as commonplace as doorknobs. Burrell, who used to live in a tent but now stays at a friend’s house, believes he contracted the virus cleaning up trash left by fellow drug users and not wearing gloves. More than two weeks after his hospital stay, he described still feeling weak and “worn out” visiting friends near the spot in Akron where he once pitched his tent.

The virus has stricken more people in Ohio than any other state but Kentucky, where it infected more than 4,800 people and killed at least 60. Kathleen Winter, a University of Kentucky epidemiologist, said more populous Ohio is on pace to surpass it as her state’s outbreak wanes.

Relentlessly, the virus continues its march across the nation. Pennsylvania declared an outbreak as recently as May. In early August, Florida and Philadelphia declared public health emergencies, which, among other things, signal to health care providers the need to vaccinate the vulnerable. Case counts now exceed 1,000 in six states.

And as in Akron, the virus reaches beyond homeless people and drug users. One in 5 Kentuckians sickened from August 2017 through mid-2019 fit neither group. Nearly 40% of Florida’s cases from 2018 and the first half of 2019 had no or unknown risk factors.

Simon Haeder, an assistant professor of public policy at Pennsylvania State University, said the outbreaks show how the addiction crisis and the diseases it fuels endanger everyone, while also revealing cracks in the nation’s patchwork, poorly funded public health system. A recent report by Trust for America’s Health found only 2.5% of U.S. health spending in 2017 went to public health.

“We have growing homeless and drug-using populations. We have a decreasing investment in public health. It doesn’t make me optimistic looking into the future,” Haeder said. “Once you reach a critical mass, eventually everyone is fair game.” 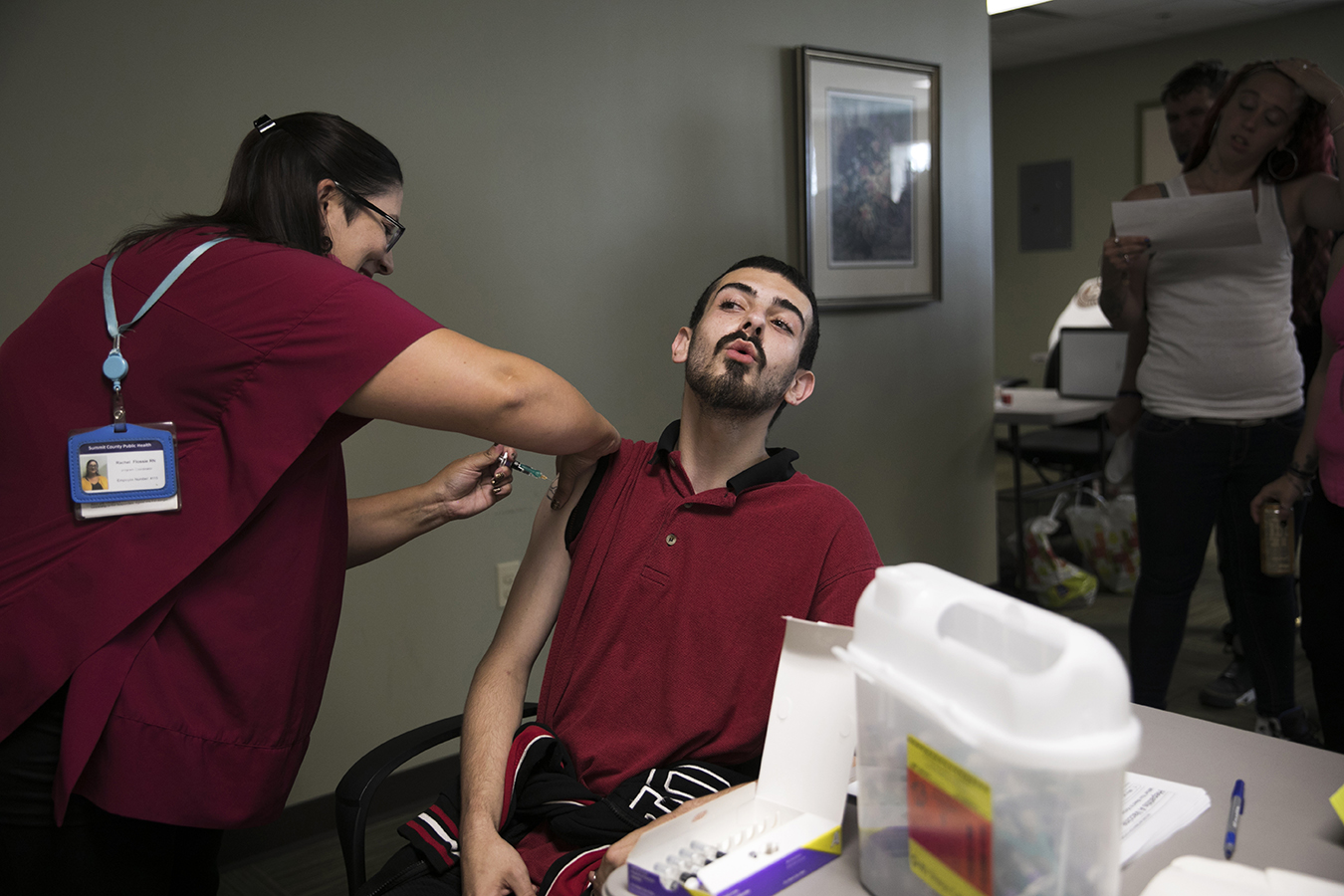 The Power Of A Vaccine

Hepatitis A, which infects liver cells and causes inflammation, can be mild or severe and in rare cases leads to liver failure and death, especially in older people and those with other liver diseases. There’s no cure; doctors advise rest, nutrition and fluids as it runs its course.

Cases dropped dramatically in the United States after a vaccine came out in 1995. The shots are recommended for babies, and federal figures from 2016 show 61% of children between 19 and 35 months old had gotten both of two doses. Only 9.5% of adults 19 and older had gotten the shots.

With so many unprotected adults, the disease roared back in 2016. Public health workers fought it by vaccinating those at greatest risk. In California’s San Diego County, they also opened hand-washing stations and distributed hygiene kits containing hand sanitizer, cleansing wipes, bottled water and other items. They even washed down streets with a bleach solution.

The next year, outbreaks appeared in five more states, including Kentucky, where it would ultimately metastasize into the nation’s largest.

The virus crept into neighboring Ohio in 2018, gradually infecting people in all but seven of 88 counties. By early this month, 111 cases had been reported in Summit County, among the state’s highest tallies.

Rodriguez and her colleagues in the northeastern Ohio county have mounted an all-out assault. They have administered more than 550 vaccinations, targeting people at the county jail, syringe services programs, drug treatment centers, post-incarceration support groups and homeless communities. When they identify cases, they work to find and vaccinate their families, friends and close contacts. Sage Lewis, an advocate for the homeless who owns land where a tent city once stood, said “the health department is saving lives.”

On a recent afternoon, Rodriguez and fellow health department nurse Rachel Flossie vaccinated 26 participants of a post-incarceration reentry program run by South Street Ministries. Participants lined up quickly to get their shots, some wincing at the prick of the needle.

Jessica Gilbert, 33, got her second dose of vaccine. She’d had her first in late May, providing most of her immunity. But she wanted to be extra cautious because she believes she may have been exposed by another woman in jail in a nearby county.

But health officials don’t reach everyone at risk. Some drug users are so focused on their next fix they don’t worry about protecting themselves from the virus. Many dealing with unstable housing or addiction are hard to find. 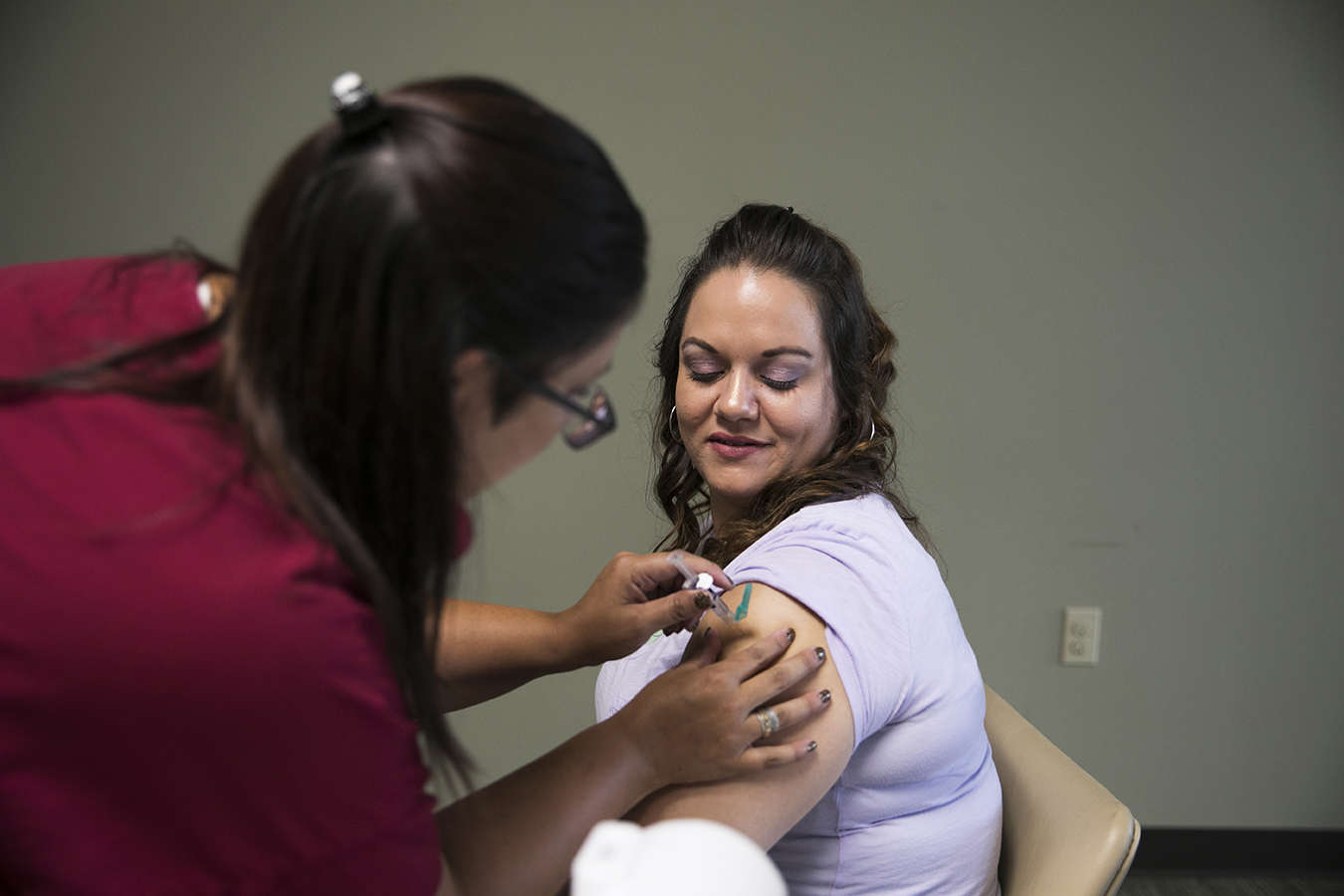 Jessica Gilbert, 33, got her second dose of hepatitis A vaccine during a South Street Ministries program in Akron, Ohio, on July 23. She’d had her first in late May, providing most of her immunity. But she wanted to be extra cautious because she believes she may have been exposed by another woman in jail in a nearby county.(Maddie McGarvey for KHN)

Burrell said he never heard of hep A before he got it. Although he knew not to share drug equipment when he cooked crystal meth, he said, he didn’t think about the dangers of touching dirty needles or other trash. Burrell now warns others to be careful and spreads the word about vaccination.

Public health nurse Yvonne Demyan does the same when she brings vaccines to a syringe services program in a strip mall health department office.

After vaccinating two other clients on a recent afternoon, Demyan stepped into the waiting area and asked a client: “Your turn?”

Before he could reply, she answered for him: “Yes. Would you rather be sick for a month? Because that’s exactly what’s gonna happen if you get hepatitis A.”

Wave Of Illness Rolls On

News coverage in some places highlights infected restaurant workers, but the Centers for Disease Control and Prevention said transmission to restaurant patrons has been “extremely rare” during these outbreaks because of sanitation practices such as washing hands and wearing gloves.

Controlling the virus has proven especially challenging in rural areas, where there are fewer services such as homeless shelters and homelessness can mean couch-surfing with friends. Many small towns have small health departments, with just a couple of nurses and declining budgets. A 2018 survey by the National Association of County and City Health Officials found 23% of local health departments serving populations under 50,000 — and 19% of all local health departments — expect budget cuts in the next fiscal year.

Against this backdrop, the CDC has injected federal resources. The agency spent roughly $9.1 million in fiscal 2018 to help curb outbreaks, which includes money for 150,000 federally funded vaccines. 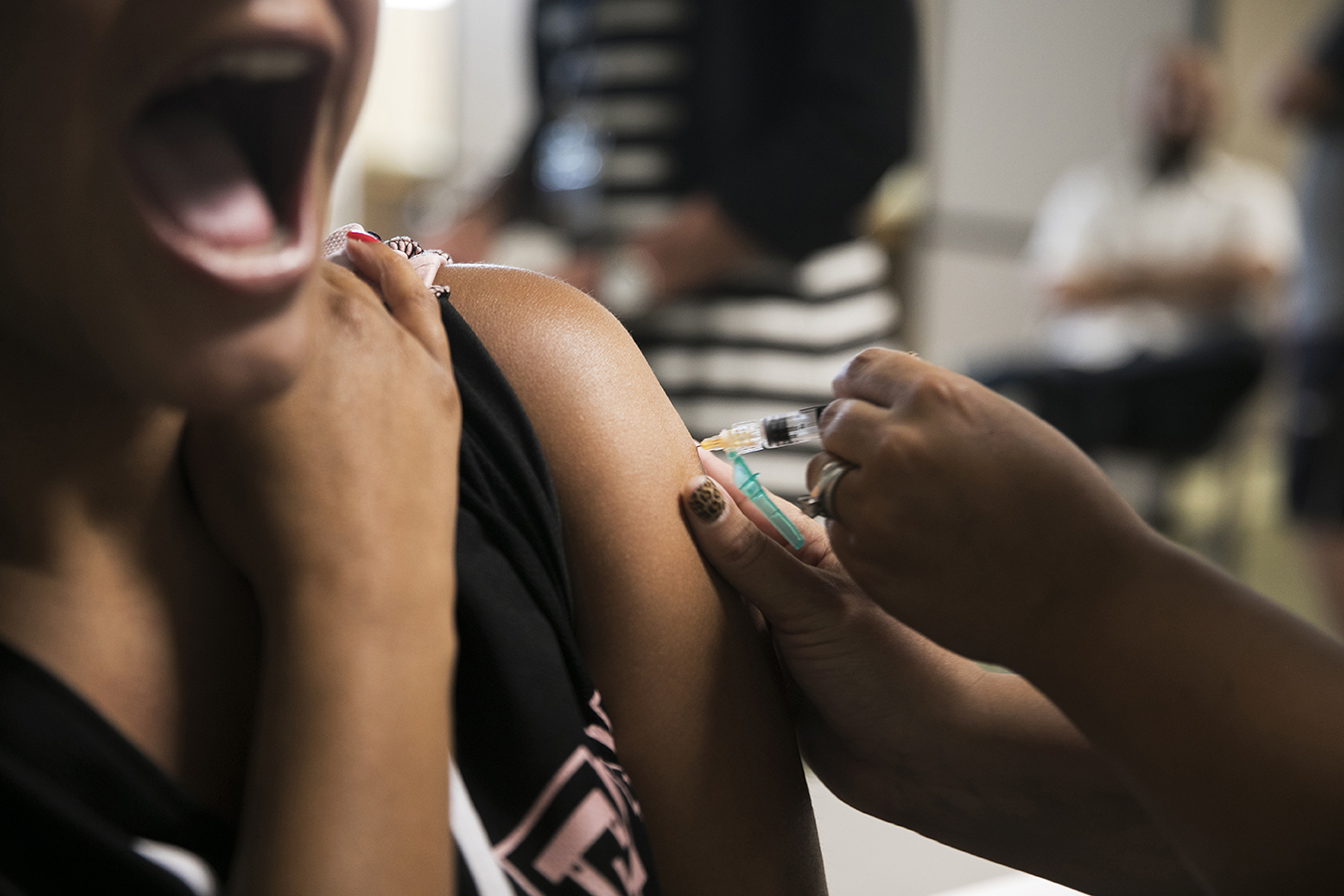 Dr. Monique Foster, a medical officer in CDC’s Division of Viral Hepatitis, said vaccinating those at highest risk remains the best strategy. “Outbreaks will stop when we have effectively vaccinated the vulnerable people,” she said.

“The risk is there. The disease is circulating,” said the University of Kentucky’s Winter. “It’s good for the general public to be vaccinated.”

With the virus continuing its advance, Penn State’s Haeder said, “it won’t be long before we have it everywhere.”

FAQ On Hepatitis A

What is hepatitis A? It’s a highly contagious liver infection caused by the hepatitis A virus. It can range from a mild ailment lasting a few days to a severe illness lasting several months. Symptoms include fever, fatigue, loss of appetite, nausea, vomiting, abdominal pain, dark urine, diarrhea, clay-colored stools, joint pain and jaundice, or yellowing of the skin and eyes. Symptoms usually last less than two months, although they can last as long as six months in some people.

How does it spread? The virus usually spreads when someone unknowingly ingests it from objects, food or drinks contaminated by minuscule amounts of stool from an infected person. It can also spread during close personal contact with an infected person, such as through sex or when caring for someone who is ill.

Who’s at risk? Anyone can get hepatitis A, but people at higher risk include those with direct contact with someone who has it; people who use drugs (injected or not); people who are homeless or have unstable housing; men who have sex with men; and travelers to countries where the virus is common.

Who should be vaccinated? The CDC’s Advisory Committee on Immunization Practices recommends vaccinating at-risk groups as well as those more likely to suffer complications from hepatitis A, 1-year-olds and “any person wishing to obtain immunity.” The committee recently voted to extend its recommendations to children ages 2-18 who missed the vaccine as babies.

How is the infection treated? There’s no medication or cure; the virus must run its course. Doctors typically treat symptoms and recommend rest, adequate nutrition and fluids. Some people need to be hospitalized. In rare cases, hepatitis A can be fatal, especially when it strikes older people or those with existing liver disease.

How is hepatitis A different from other types of hepatitis? Hepatitis A, B and C are caused by different viruses. Hepatitis B is primarily spread when blood, semen or certain other body fluids from an infected person enters someone else’s body. Hepatitis C is spread via blood. Hepatitis B or C can range from mild illnesses, lasting a few weeks, to serious, chronic conditions. There are vaccines for hepatitis A and B, but not hepatitis C.