Mississippi Insurance Commissioner Mike Chaney, who has been the driving force behind creating a state based exchange, got his answer from the feds Thursday: Sure can’t.

The U.S. Department of Health and Human Services rejected Mississippi’s plan Thursday afternoon, making Mississippi the only state to have its exchange blueprint nixed by the federal government. Instead, Mississippi will have a federal exchange like the more than two dozen other states that have balked at implementing the health law.

The decision follows more than a month of delay from the federal government over the future of Mississippi’s proposal to run its own exchange. Chaney propelled the effort forward even though Mississippi Gov. Phil Bryant opposed a state-based exchange.

The federal government said the split between Chaney and Bryant is at the heart of the decision.

Chaney began building the exchange in Mississippi based on his authority to run the state’s high risk pool. One problem with that is it has nothing to do with Medicaid — only subsidized private insurance. The Affordable Care Act says that the exchanges have to be one-stop shops for both private insurance and Medicaid. As insurance commissioner, Chaney doesn’t have access to Mississippi’s complicated Medicaid enrollment processes.

Gov. Bryant sent letters to HHS expressing his opposition to state based exchanges and questioning the commissioner’s legal authority to run one. Chaney insisted he had the authority and was backed up in a ruling by the state’s Democratic attorney general.

In a statement, Bryant praised the ruling from the federal government. 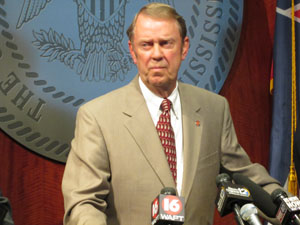 “I have said repeatedly that the health insurance exchanges mandated by Obamacare are not free-market exchanges. Instead, they are a portal to a massive and unaffordable new federal entitlement program.  They trigger new taxes on businesses and will ultimately drive more people onto Medicaid rolls. I firmly maintain my position that Mississippi will not willfully implement a mechanism that will compromise our state’s financial stability,” Bryant said.

Mississippi would have been the only southern Republican-led state with a state based health insurance exchange. But a spokesman for HHS said it just wasn’t “feasible.”

“With the Governor’s refusal to work with us or the insurance commissioner, there is no way to coordinate strategy with other agencies that he’s in charge of,” an HHS spokesman told KHN.

Commissioner Chaney predicts the federally run exchange will have disastrous consequences for the state insurance market.

“What you are going to see in the next 12 months is those premiums doubling, maybe tripling. You are going to see a 3.5% tax charged by the federal government for every policy sold on the exchange that the feds have,” Chaney said.

Chaney also suggested the decision to reject the blueprint came from the White House rather than from HHS, which is overseeing the exchange implementation.

Work has been underway on an insurance exchange for years and Chaney is not sure what of those efforts will be able to remain and what will be scrapped. The Web portal for the state’s exchange already exists at OneMississippi.com.

The commissioner is leaving the door open for Mississippi to run a state-based exchange exclusively for small businesses.

“Given the work the insurance department has done, Mississippi is an excellent candidate for a state partnership marketplace.  We encourage Mississippi to apply to operate parts of its marketplace by the February 15, 2013 deadline,” the HHS spokesman said.

This story is part of a collaboration that includes Mississippi Public Radio, NPR and Kaiser Health News.

Phil Galewitz contributed to this report.

HHS Denies Mississippi’s Bid To Run Its Own Exchange