Nearly a quarter of the 2.2 million people who have enrolled in health coverage in the health law’s insurance marketplaces are young adults — the population that’s hardest to reach and yet most vital for the financial stability of the new exchanges, the Obama administration announced Monday.

While federal officials say they are pleased with the early turnout, they want to increase the proportion of young adults buying plans before open enrollment ends March 31. Almost 40 percent of the potential market for the exchanges is people 18 to 34 years old. Based on the Congressional Budget Office estimate that 7 million people would enroll this year, that would be 2.7 million young adults.

According to the government figures released Monday, 24 percent of those enrolling in the marketplaces through Dec. 28 were adults ages 18 to 34. Though no one expected young adults to be first in line signing up for coverage this fall, trouble with healthcare.gov during October and November has increased the challenge of reaching them. 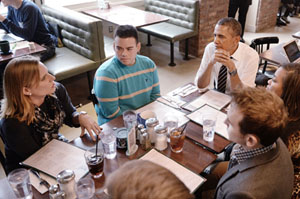 President Barack Obama met with some of the people helping with health care enrollment efforts on Friday in Washington. (Photo by Olivier Douliery-Pool/Getty Images).

“There’s no question because of the technological challenge, that outreach to that population was put on hold and folks coming to the website in October and November were those who were super-motivated,” said Sabrina Corlette, research professor at the Health Policy Institute at Georgetown University .

Corlette noted that experts always expected most young people to wait until late in the enrollment period to enroll. “I do not see anything about the age breakdown figures that strikes me to get super excited about or super depressed about,” she said.

Getting enough young adults to sign up for coverage is critical to keeping the marketplaces financially viable by subsidizing the older and sicker people who are gaining coverage because insurers can no longer turn people away for pre-existing illnesses or charge them higher rates. If too many sick people buy insurance, it could lead to higher rates in future years that could eventually compromise the market.  The health law’s individual mandate was put in place largely to make sure young adults signed up.

The details about young adults came in a briefing from top Health and Human Services officials and from an HHS report that for the first time provided details about enrollees’ age and plan choice on a state by state basis. Some states individually had released data.

— About 60 percent of people buying policies on the marketplaces chose a silver plan, 20 percent bought bronze, 13 percent bought gold and 7 percent bought platinum. Policies run from platinum as the most expensive, followed by gold, silver and bronze, the lowest tier. The higher the metal tier, the higher the monthly premium but the lower the copays and deductibles.

–Only about 1 percent of people chose a catastrophic plan which requires enrollees to pay much of their medical costs up to a certain amount. Catastrophic plans are available for people under age 30, those with a financial hardship or those who have had their insurance policy canceled.

–About 80 percent of those buying a plan qualified for a financial subsidy.

— Women were more likely to purchase plans on the exchange with only 46 percent of enrollees being male. Administration officials say they hope to enroll more men.

Young adults are the most likely group to lack coverage — 19 million people between 18 and 34 are uninsured. Most say they do not buy policies because they can’t afford it, says Aaron Smith, founder and executive director of nonprofit group Young Invincibles, a proponent of the health law.

“The 24 percent figure suggests we are on the right track,” he said. About 18 million of the 19 million will qualify for subsidies to buy private coverage or for Medicaid, he said.

Because of concerns about sicker consumers overwhelming the risk pool, much attention has been centered on young adults. But Cori Uccello, senior health policy fellow at American Academy of Actuaries, cautioned that age distribution is only important as a rough barometer of health status of people signing up for coverage. “It’s not just the distribution of age, but the health status at every age and what is their experience (in using insurance),” she said.

She added that the age distribution of those buying coverage only matters if it’s much different than what insurers based their assumptions on in setting premiums.

“Among young adults, momentum is particularly strong,” Health and Human Services Secretary Kathleen Sebelius said in the telephone briefing with reporters.  In addition to young adults buying health plans, about 3 million have gained coverage because of a provision in the law that allow them to stay under their parents’ policy until age 26, she said.

The data about young people released Monday mirror what some state marketplaces have already reported. There had been concerns that states relying on the federal exchange would have less consumer outreach and would have a lower proportion of younger people signing up. So far, there’s not a big difference. Among the 14 state exchanges, about 25 percent of enrollees are between 18 and 34 compared to 23 percent for the 36 states in the federal exchange.

The percentage of young people enrolling ranges from 17 percent in West Virginia and Arizona to 44 percent in the District of Columbia. The individual state proportions matter because each state is a different insurance market that has its own pricing.

The low level in Arizona is “a little surprising because we’ve been doing enrollment at community colleges and we have had a good response,” said David Aguirre, health care marketplace coordinator for the Greater Phoenix Urban League.

But since so many of the students live out of state, they may be reluctant to enroll in Arizona’s exchange, which is administered by the federal government, he said.  Now that the second semester of college has started for many students, Aguirre said his staff is giving it another try.

He expects more younger people will enroll by March 31. “We are pushing every day and we are out there bugging them to make sure they understand,” he said.

Smith of the Young Invincibles said that the disparity of rates among states shows those doing outreach will see a larger share of young people sign up.

No data was released about people enrolling in individual plans outside the marketplaces. Those numbers could, of course, impact insurers’ risk pools.

HHS officials said that some of the differences reflect differences in the average age of state populations. They noted that West Virginia and Arizona have higher percentages of older people than some other states.

California, which accounts for nearly 500,000 people who have chosen a health plan, had 25 percent enrollment among young adults.

HHS spokeswoman Julie Bataille said the administration would widen its outreach efforts in the next few months, which is expected to include television advertising during the Olympic Games in February.

“There has been a lot of attention to the mix of individuals signing up for coverage so at the end of the day we have a balanced insurance pool,” said Mike Hash, who directs the HHS’ Office of Health Reform. “The trend is suggestive of an appropriate mix in the marketplace. We are only halfway through and we expect an increase in the proportion of young adults as we go forward.”

A recent survey by The Commonwealth Fund, a nonpartisan research group, found that 41 percent of those who had shopped on state marketplaces were ages 19 to 34.

A study in November by the Kaiser Family Foundation (KHN is an editorially independent program of the foundation), downplayed concerns about so called “death spiral” if not enough young people enrolled. Under a worst-case scenario in which just 25 percent of enrollees are age 18 to 34, then insurers would have to raise premiums by just 2.4 percent in 2015.

Nearly A Quarter Of Health Marketplace Enrollees Are Young Adults