Nearly 3.3 million Americans have signed up for private health insurance plans since October through the online marketplaces created by the health law, with enrollment continuing to surge through January, an Obama administration report said Wednesday.

But the number of young adults signing up continues to lag expectations, which could impact insurance premiums next year. Insurance industry officials have been closely watching the mix of customers to make sure they get enough healthy people to balance the cost of covering older Americans who generally require more medical care.

About 25 percent of people signing up for coverage through January were between the ages of 18 and 34 in the 36 states served by the federal marketplace—up from 24 percent in last month’s enrollment report. However, officials noted that the rate of signups among young people grew by 65 percent in January, compared to 55 percent for all other age groups combined. 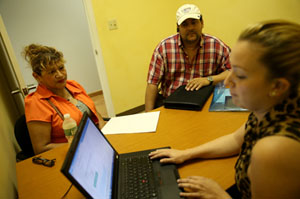 “These encouraging trends show that more Americans are enrolling every day, and finding quality, affordable coverage in the marketplace,” Health and Human Services Secretary Kathleen Sebelius said in a statement.

The administration hopes that ads being shown during the Olympics and pro basketball games will also bring in more young adults. To date, enrollees have skewed female:  Of the 3.3 million overall signups through January, 55 percent are female and 45 percent are male.

Overall, enrollment increased by more than 1 million in January, the report said. That was lower than the 1.8 million who had signed up in December, a surge fueled by those who had been unable to use the website in October and November and who wanted coverage starting Jan.1.

The online insurance marketplaces — a centerpiece of the Affordable Care Act —were created so Americans who could not get coverage through their jobs could select among plans that offer a basic set of benefits. Americans making between the federal poverty level, $11,500 for an individual and four times that, or $46,000, qualify for government subsidies to offset the cost of their premiums.

The marketplaces opened Oct 1 and the first year’s open enrollment is scheduled to end March 31. After a disastrous start as a result of malfunctioning websites, the nonpartisan Congressional Budget Office revised downward its expectations on how many would enroll in the first year. Instead of 7 million, CBO now expects 6 million.

The percentage of people between 18 and 34 enrolling ranged from 17 percent in West Virginia, to 31 percent in Utah, to 44 percent in the District of Columbia. The variation reflects states’ different demographics, federal officials said.

An estimated 6.3 million people have enrolled in Medicaid through the same period, officials said, but that number includes previous enrollees as well as those who are newly eligible under the law. Consulting firm Avalere estimates that between 1.1 million and 1.8 million of those have enrolled as a result of expanded eligibility.

In addition, more than 420,000 people have purchased standalone dental plans in the federal marketplace, the report said. Dental enrollment figures were not available for the state marketplaces. 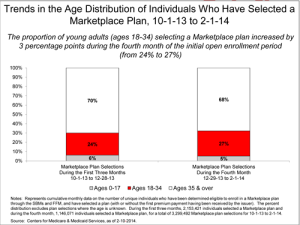