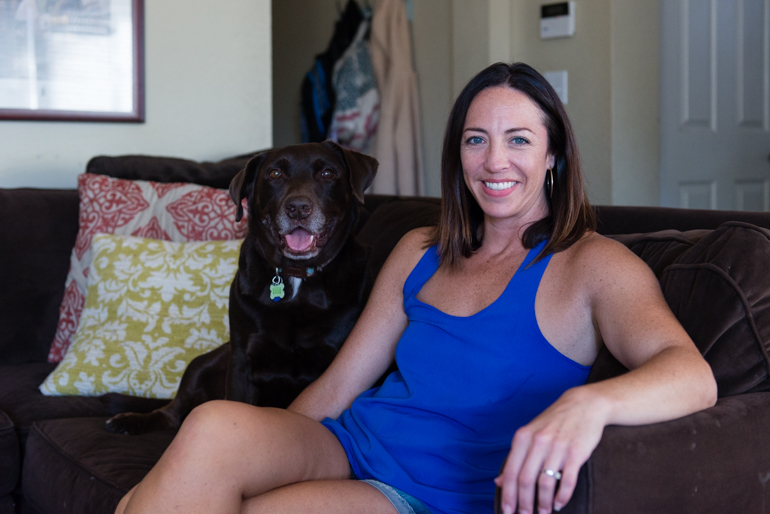 Jamie Hancock, 38, at her house in Rocklin, Calif., in June 2016. Six years ago, Hancock suffered a stroke caused by a tear in her artery. (Heidi de Marco/KHN)

ROCKLIN, Calif. — The headaches were excruciating and wouldn’t go away. Her doctor said they were migraines. Then, one morning a few weeks later, Jamie Hancock stood up from the couch and discovered she couldn’t move the right side of her body. When she spoke, her speech was slurred.

At the hospital, doctors told her she was having a stroke. The 32-year-old Hancock, whose children were just 1 and 3, had a sobering epiphany: “My whole life is changed forever.”

Now, six years later, no one would know she is a stroke survivor. A lifelong dancer, she is fit and muscular. She speaks clearly and walks quickly as she shuttles her kids around, runs errands and teaches dance classes.

But the effects — for her and other young stroke victims — linger just below the surface. They are there when she gets mad at her family, when she can’t remember what she needs at the grocery store, when she tires after working for a few hours. The noise and light can be unbearable, forcing her to escape to a dark room.

Some days Hancock tries to be the energetic and sociable working mom she was before the stroke. Then she crashes.

“I sort of forget I have a disability and I think I can do everything anyone else my age can do,” she said. “But I can’t.”

Hancock is among a growing number of younger adults who’ve had strokes, which occur when blood flow to the brain is blocked or a vessel in the brain bursts. Because strokes are most often associated with old age, symptoms in younger adults may be overlooked, according to patients, advocates and physicians. And their need for rehabilitation — to return to active lives as parents and employees, for instance — can be underestimated.

“The American public is still very locked on stroke being an [affliction] of the elderly,” said Amy Edmunds, who started a nationwide advocacy and support organization called YoungStroke. “But we are an emerging population … and we really need to be recognized.” 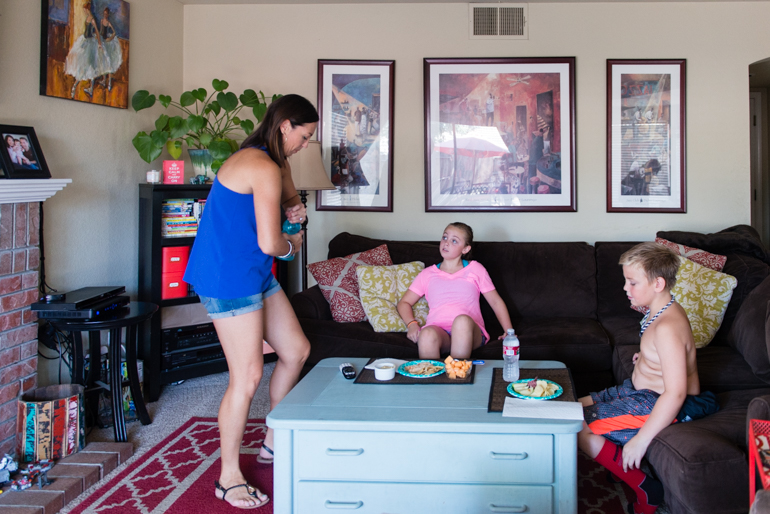 Hancock serves lunch to her children Blythe, 9, and Andrew, 7. Hancock said she lost the cognitive ability to do certain tasks which made it difficult to keep her full-time, office job. (Heidi de Marco/KHN)

The reasons for the rising prevalence among young people are not clear, but physicians believe that growing risk factors such as hypertension, smoking and obesity contribute. And because younger patients aren’t as aware that they can get strokes, they may not be proactive about controlling those risk factors. Older patients, by contrast, may be more inclined to exercise, eat healthy and take preventive medications.

“Older people are educated and understand they need to take care of themselves and are doing all the things to prevent strokes,” said Lisa Yanase, a stroke neurologist at Providence Health & Services in Oregon. “Young adults … think they are bulletproof. They haven’t had the realization that these things can actually be bad for them.”

Some young people also may have strokes because of drug abuse, and others because of undiagnosed genetic conditions. Hancock’s stroke was caused by a tear in the artery.

Strokes are still more common among older adults though. People ages 18 to 50 years old account for only about 10 percent of the 795,000 strokes that occur each year, according to the American Heart Association.

When their patients are younger, doctors don’t always immediately recognize strokes, said Lucas Ramirez, a physician at Keck Hospital of USC and one of the co-authors of the journal article. Young adults may also be unaware they are having a stroke, jeopardizing their chances of receiving critical, time-sensitive treatment.

Common symptoms, for all ages, include sudden confusion or numbness, slurred speech or severe headache.

Hancock said she had no idea of the warning signs. “I had heard about strokes, but I thought they were for the elderly,” she said.

Years had passed since the stroke, and now the Fourth of July was just a few days away. Hancock had promised her children they could buy fireworks. Blythe, 9, and Andrew, 7, selected several sets. But when the clerk handed the bag to the kids, one of Andrew’s wasn’t inside.

Hancock told her son to stop. But he asked again — and again.

“Hold on!” she yelled. “I’m trying to focus on paying. You know I have a hard time with focusing.” 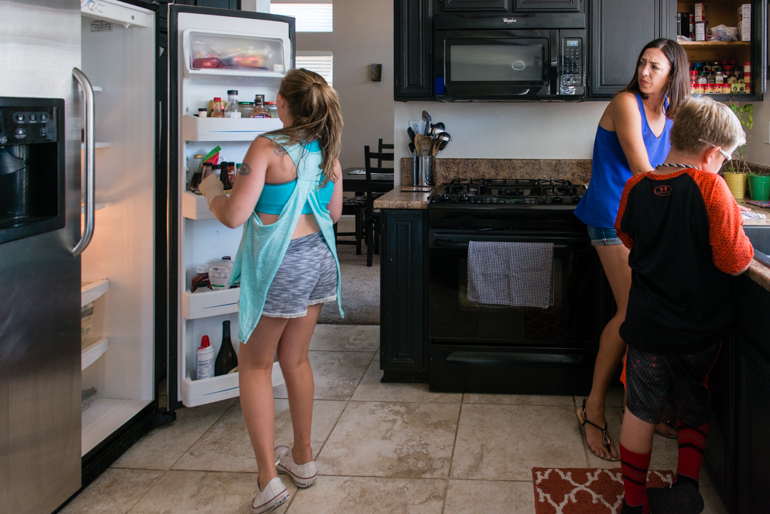 Hancock and her children get ready for a shopping trip to the grocery store in June 2016. Hancock said her stroke made her forgetful, so Blythe has to help her keep track of things around the house. (Heidi de Marco/KHN)

Hancock said she never used to be that way. Now, she has trouble multitasking and gets angry about minor things — her daughter playing music too loud, her son bouncing the ball inside the house. “My family pays the price,” she lamented.

Both children say they’ve learned what to do when their mom gets stressed. Andrew gives her hugs. Blythe helps her take deep breaths. “Sometimes she has really good days and sometimes she has horrible days,” Blythe said.

In addition to the emotional roller coaster, Hancock said she has lost the cognitive ability to do some things, such as handling the family finances.

There is less money to go around, too. Just a few months after the stroke, Hancock returned to her job as an executive assistant at the California Restaurant Association. But she had trouble concentrating, couldn’t manage her time or meet deadlines — and she eventually left. She later got fired from a subsequent job.

“I would get distracted really, really easily,” she said. “I still do.”

Hancock said she spiraled into depression, which therapists later told her was likely a symptom of the stroke. She also became addicted to a painkiller prescribed to treat her headaches. She said it helped her get through the day without feeling exhausted.

With the assistance of Suboxone, a medication to treat opiate addiction, Hancock got sober. But that didn’t stop her mood swings. There were times when she slammed cabinets so hard they fell off their hinges.

Her husband, Ken Hancock, said the stroke and its aftermath nearly tore their family apart. At first, he just felt scared. For a while, his wife couldn’t wash her own hair or pick up their children. When she cooked, one of her hands shook. 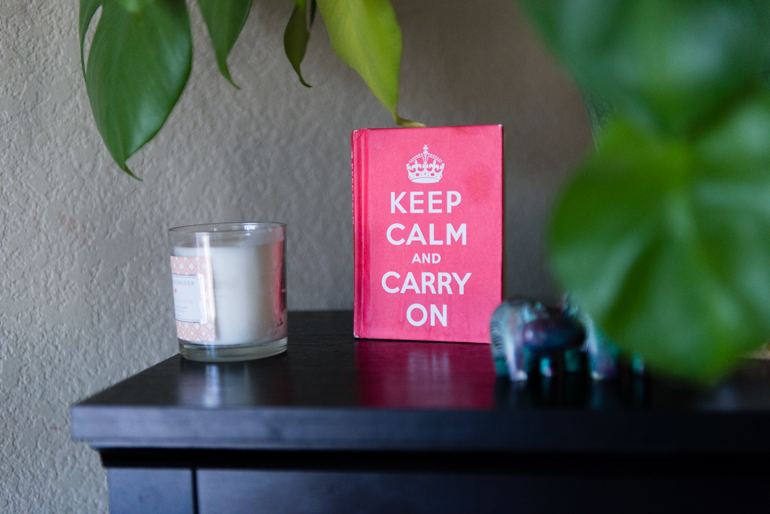 A meditation book sits on Hancock’s living room table. After her stroke, she said she needs to find ways to calm herself down during stressful moments. (Heidi de Marco/KHN)

He concentrated on getting his wife to appointments and taking care of her and their children. But as she got better physically, he said, she became worse emotionally. The addiction didn’t help, and they argued frequently. “It was a terrible, terrible cycle,” he said. “It took a long time to realize better things were around the corner.”

Now, the family is in a better place, he said. Jamie Hancock sees a therapist and takes medication that is normally used to treat schizophrenia. The volatility has subsided.

Ken Hancock said his wife’s brain injury isn’t visible, but it’s there. “She is still trying to recover, and we are sort of in the same boat with her,” he said.

On a June afternoon, Hancock sat in her living room with another young stroke survivor, Jen Ruzicka Lee, an ER nurse and longtime runner who was stricken last year at age 43. Lee returned to nursing part-time in April, but she still stutters and uses a walker.

They laughed and nearly cried as they talked about the impact of different medications, becoming intimate with their husbands again and the daily guilt they felt about the effect of the strokes on their children.

Both women said they had attended a few stroke support groups but couldn’t relate to the older participants. “They would say, ‘You need to nap,” Hancock recounted. “That’s great, but I can’t. I have kids.”

Support groups and rehabilitation programs are typically designed for older adults, said Edmunds, the YoungStroke founder, who was hit by the disease at age 45. Many young stroke survivors have to figure out how to continue raising children and working while dealing with the effects of a stroke. 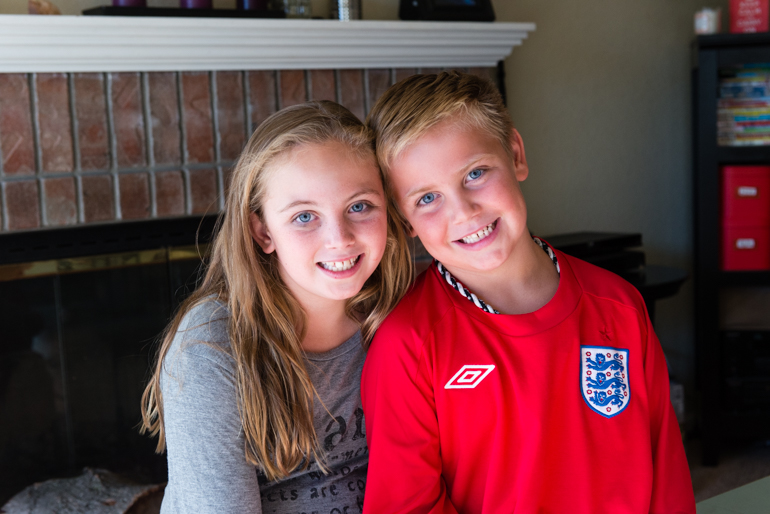 Hancock says she feels guilty about the stress her children have to endure due to the side effects of her stroke. (Heidi de Marco/KHN)

“It’s a different landscape for younger adults,” Edmunds said. “We need skills to help us get on with our lives post-stroke, which could conceivably be as long as pre-stroke.”

Hancock and Lee, along with two other women, have become an informal support network. They text often and meet for coffee when they can. This month, they had a family barbecue.

Being a young stroke survivor, Hancock said, “is a whole different ballgame.”

Hancock tried to return to dancing soon after her stroke. She couldn’t do a single turn on the floor, and walked out in tears.

“I had to learn to walk again so I don’t know why I thought in my brain I could take an advanced dance class,” she said.

Over time, Hancock regained her strength. She said she doesn’t think her brain will ever be able to handle a 40-hour work week. Teaching dance part-time can even be too tiring some days.

On this evening, however, Hancock energetically stepped into a brightly lit dance studio. She and five young students warmed up to music. Hancock instructed them to run through the dance routine they had practiced the previous night.

“Let’s see what you remember,” she said.

Then she smiled. “Let’s see what I remember, too.”