The U.S. Supreme Court heard arguments Tuesday in a case that could block hospitals, doctors — or anyone else — from suing states over inadequate payment rates for providers who participate in the Medicaid program for low-income Americans.

Federal law requires Medicaid, which covers 70 million people, to provide the same access to care as that given to people with private insurance. But many doctors avoid seeing Medicaid recipients, saying the program pays too little. That can lead to delays and difficulties in getting care for millions of poor people.

In Armstrong vs. Exceptional Child Center, several providers for developmentally disabled Medicaid patients sued the state of Idaho after officials failed to increase Medicaid payments as required under a formula approved by the federal government. An appellate court upheld a judgment in favor of the providers last year, noting that Idaho had conceded that it held rates flat since 2006 for “purely budgetary reasons.” 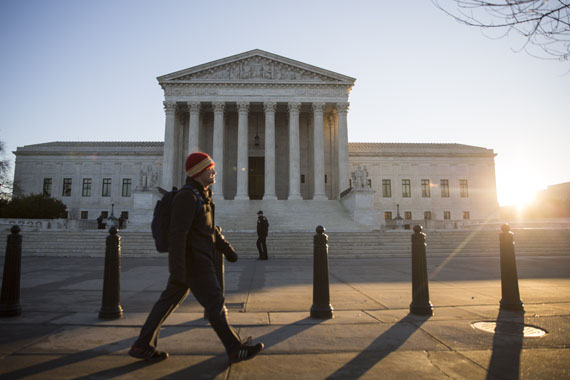 A view of the Supreme Court, January 16, 2015 in Washington. (Photo by Drew Angerer/Getty Images)

The issue before the high court is whether the U.S. Constitution gives providers the right to sue the state to increase their pay. And the court appeared split on that issue based on their remarks Tuesday. Chief Justice John G. Roberts Jr. expressed concern about opening the door to a flood of lawsuits that could have federal judges determining state payment rates and potentially gutting state budgets, while more liberal judges appeared more sympathetic to the providers.

“It seems to me that this is a prescription for budget-busting across the board.” Roberts said of allowing provider lawsuits. “It seems to me [we] will be putting the setting of budget priorities in the hands of dozens of different federal judges, and I just don’t know what the practical significance of that is going to be.”

In the past two decades, providers and patient advocates have sued Medicaid programs in numerous states, including California, Illinois, Massachusetts, Oklahoma, Texas and the District of Columbia — with many of those suits resulting in higher pay for doctors and other providers.

But Justice Sonia Sotomayor noted that in the case before them, Idaho officials had failed to follow the federally approved Medicaid payment formula.

Idaho is asking the Supreme Court to hold that neither providers, nor any other private party has the right to challenge payment rates in court; indeed that only the federal government has that ability.  A decision is expected by June.

More than half the states and the Obama administration have backed Idaho’s position. Major provider groups including the American Medical Association and the American Hospital Association — along with patient advocacy groups such as the National Health Law Program — have sided with the providers.

During the hearing, Roberts and Justice Antonin Scalia questioned why providers don’t take the issue up with the federal Centers for Medicare & Medicaid Services, which oversees state Medicaid programs. But the federal government has few options to sanction states other than cutting off a state’s federal Medicaid funding — the so called “nuclear option,” which CMS has never used, said an attorney representing the Idaho health providers.

The last time the court considered the issue, in a 2012 case from California called Douglas vs. Independent Living, a narrow majority sent the case back to lower court without clearly affirming or negating the right to sue. But four conservative justices in their dissent said that without explicit language from Congress saying that such a right exists, private parties such as providers and patients could not challenge Medicaid fees.

State Medicaid programs typically pay low rates — at least one third lower than Medicare, the federal plan covering the elderly and disabled. The Affordable Care Act widened eligibility for Medicaid to cover more low-income adults, adding nearly 10 million people to the program in the past year. The law temporarily increased reimbursement rates for primary care providers, but only in 2013 and 2014.