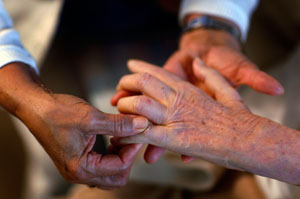 Last December, President Barack Obama announced a proposal to overturn a 1974 law that exempts “companionship” employees from the Fair Labor Standards Act. When the exemption was created, the home care industry was in its early stages and the exemption was initially intended to apply to informal workers such as babysitters.

Obama’s plan for a change in regulations has come under assault from segments of the home care industry, especially for-profit companies. Officials in the industry worry the proposal would increase costs for these services and could cause employers to reduce hours for workers, potentially making it more expensive and harder for clients to get the care they need. Still, 15 states already provide minimum wage and overtime regulations and another five states and Washington, D.C. require minimum wage.

Wynn Esterline, who owns an in-home companionship care business in Michigan, told the congressional panel that similar efforts in his state led families to cut back on services because of the higher expenses and workers’ hours were reduced to meet the new standards. “No one is better off than they were before this change went into effect, not me, not my clients, and certainly not my employees,” he said in his prepared remarks.

The House Subcommittee on Workforce Protections, chaired by Rep. Tim Walberg, R-Mich., held the hearing, which came a day before the Department of Labor closes its comment period on the new regulations.

Since the exemption was enacted nearly 40 years ago, the home care industry has grown exponentially. Labor groups and advocates for home care workers have long complained that poor pay and limited benefits create high turnover in the profession, which leads to instability for the growing numbers of seniors and disabled who depend on such services.

“The exclusion of these more than two million home care workers from basic minimum care protections has been undermining the care they do and the care that consumers receive,” said Catherine Ruckelshaus, legal co-director at the National Employment Law Project in her prepared testimony for the hearing.

Direct care workers form the backbone of the long-term care industry, and provide basic care such as bathing, dressing and feeding as well as light housekeeping to allow seniors and disabled people to stay in their homes and avoid moving to nursing homes.

Between 2010 and 2020, health care support is expected to be the fastest growing occupation, expanding at 34.5 percent. During that time, an additional 706,000 home health aides and 607,000 personal care aides are expected to enter the labor force, according to February employment projections from the Bureau of Labor Statistics.

That ongoing growth has meant large profits for home care companies. In 2010, these companies earned an average profit of 19.4 percent, which caused the panel that advised Congress on Medicare to propose lower reimbursement rates for them, according to a recent article in USA Today.

Meanwhile, home care workers often struggle to make ends meet and nearly half of them live in households that receive food stamps, Medicaid or other government aid, according to PHI National, an advocacy group for direct-care workers.