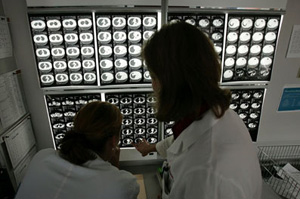 Maryland hospitals and regulators are teaming up in an experimental payment plan to reduce unnecessary admissions while improving patient care.

One of six patients hospitalized in Maryland in the past year ended up back in the same facility within a month, a risky situation for them and a costly one for bill payers.

To keep that from happening so often, more than a dozen hospitals may join an experiment: Upend the traditional way they are paid and set in motion changes that could both boost patient care and reduce preventable admissions.

“We think we can turn that trend a bit,” said Stuart Erdman, finance director for the Johns Hopkins Health System.

The voluntary effort, which includes hospitals such as Suburban, Howard County General and the University of Maryland Medical Center, would essentially cap payments for in-patient care at about this year’s levels for three years. During that time, hospitals could reap substantial savings if they reduce re-admissions — and lose money if they go up. Smaller hospitals in more rural areas are being offered a slightly different program with a broader goal.

The initiative could provide a national example of how to reduce unnecessary or repeat hospital admissions, which drive up the nation’s health care tab and put patients at risk. In some ways, the state is uniquely positioned to make such a move, as it is the only one where regulators set hospital rates – and all insurers agree to pay those rates.

To reduce unnecessary admissions, Maryland hospitals would have to work with doctors and other providers in the community to ensure that patients get the care they need – preferably in lower cost settings. Patients leaving the hospital, for example, might be connected with care managers or nurses to ensure they take their medications and get prescribed follow-up treatment.

“We’re trying to push the idea that health care doesn’t stop at the walls of the institution: You’re trying to treat the community,” said the effort’s main driver, Robert Murray, executive director of the Maryland Health Services Cost Review Commission.

Murray’s agency will meet Dec. 8 to discuss the proposals, with final approval possible early next year for the urban hospitals. Meanwhile, the state is negotiating contracts for a similar type of payment change with smaller, more rural hospitals that are the sole providers in their regions.

Instead of capping payments for re-admissions, the program for smaller hospitals sets a target budget for all care, inpatient and outpatient. The target is set slightly above their current total expenditures and only rises based on inflation and population growth in the coming years. If hospitals reduce admission rates or appropriately shift some patients to lower cost care in outpatient clinics or doctors’ offices, they will come out ahead. If their admission rates increase, they could lose money.

Two rural hospitals – Garrett County Memorial in Oakland and McCready Memorial in Crisfield — have already signed such contracts for three years and at least seven more, including Calvert, are in line to do so, says Murray.

The initiatives are the broadest nationally to use financial incentives to reduce unnecessary hospitalizations, experts say. But they also caution that it must be done right – with proper safeguards for patients.

“This offers an opportunity for a win-win, promising to reduce cost and waste and at the same time making patients feel better,” says Stephen Jencks, a medical doctor and Baltimore-based health consultant who has spent years studying hospital readmissions.

But he warns there could be problems – hospitals directing patients to rival facilities to keep down readmissions, for example. “The first step should not be on the patient’s toes,” Jencks says.

In an outline of the plans, Murray acknowledges that they potentially could lead hospitals to “provide insufficient care” or could even raise costs if hospitals simply hold returning patients in emergency departments – thus avoiding an admission.

Hospitals would still receive payments for returning patients who are seen in emergency departments or held for “observation” but not admitted.

The Maryland Hospital Association says it supports efforts to reduce readmissions, but cautions that not every hospital would be able to accept the types of voluntary arrangements Murray is suggesting. The association says it also wants a statewide effort – funded by an increase in hospital rates.

Much is riding on finding a solution: Nearly 17 percent of patients in Maryland in the last fiscal year were readmitted to the same hospital within a month, care that accounted for more than $1.2 billion of the approximately $9 billion spent on hospital care, according Murray’s report. Reducing same-hospital admissions would save money and could also have a spillover effect in reducing emergency department visits, he says, allowing the state to approve smaller hospital rate increases in the future.

Maryland’s average 30-day re-admission rate for patients in the Medicare program for seniors and the disabled – 22 percent — is the second highest in the country, a study of 2003-2004 discharges by Jencks published last year in the New England Journal of Medicine found.

To reap savings, hospitals will need to make changes, such as hiring case managers or nurses to more closely track patients who are discharged or offering longer hours at urgent care clinics. “There would be a post-discharge clinic that would ensure that a patient sees their physician or other care provider within 48 hours of discharge to see if everything is OK,” says Thomas Mullen, president and CEO of Mercy Health Services in Baltimore.

The payment proposal comes well ahead of requirements in the new health law that will reduce Medicare payments to hospitals in fiscal 2013 that have above-average readmission rates for heart attack, heart failure and pneumonia. The Maryland effort is also broader, seeking to reduce admissions across the board.

Raymond Grahe, chief financial officer at Washington County Hospital in Hagerstown, says his hospital is interested and is in talks with Murray’s office over a budget contract. “This is what was missing from the health care reform package: It was basically about insurance reform, when what it truly
needed was care reform,” says Grahe.