The pediatric clinic at the Hennepin County Medical Center in Minneapolis gives its patients what they need to stay healthy: screenings, immunizations, prescriptions.  And, in an uncommon twist, food. 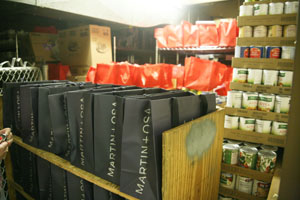 The clinic offers a food pantry—one of only a few in the nation that is hospital-based. It provides an important safety net as increasing numbers of families experience hunger, according to the staff there.

In September, the food pantry gave out 9,619 pounds of food to 232 families.  That same month, hospital officials released data showing that household food insecurity —a research term that means families are unable to afford enough healthy food to eat—increased from 29 percent in 2009 to 41 percent in 2010 among young children at the hospital.   And, there has been a steady rise in the rate of children who are at risk for being underweight, an indicator of poor nutrition, during the economic downturn.

Children from food-insecure households are more likely to be in fair or poor health than other children. For some children who go without adequate nourishment for a prolonged time, repercussions can include include serious problems such as iron-deficiency anemia or developmental delays, according to Children’s HealthWatch, a pediatric research center that collects data in Boston, Baltimore, Little Rock, Philadelphia and at Hennepin.

Dr. Diana Cutts, the assistant chief of pediatrics at Hennepin and a researcher at Children’s Healthwatch, said that when a child suffers from hunger, the experience can send ripples into the larger community, such as if a child falls behind his or her classmates in school and requires special education.

“This is an issue that affects everyone,” she said.  “It’s not just a child who suffers individually; it’s a society that suffers.”

The food pantry, which is now in its third year of operation, grew out of a project the clinic ran that focused on encouraging families to incorporate canned fruits and vegetables into their diets.   When the staff realized that they could build on its success by creating a formal food pantry, they linked up with a local food bank to take advantage of its ability to buy in bulk.

The staff also revamped the traditional food pantry model because of space constraints.   So, rather than operating a food pantry out of a single space, the clinic went mobile, bringing prepacked bags to the clinic for families.

And the food pantry has made other adjustments to meet the needs of its families: the staff is careful not to hand out bags that are too heavy to get home on public transportation and uses cloth bags that can withstand exposure to rain and snow.  The food pantry also provides only food that meets nutritional standards but does not restrict how often a family receives food.

Linda Carson, project coordinator for the pantry, said that staff members throughout the clinic keep their eye out for signs that a family may be in need of food.  There is no single profile to look for but rather a variety of signs that may indicate hunger—even, in some cases, obesity.

Cutts said that hospitals are increasingly aware of how hunger affects health but that some are under financial stresses that make it difficult to provide services such as a food pantry.

If they can find the resources, though, it’s well worth it, according to Cutts—a message she also hopes reaches policymakers.

“We just have to be willing to invest in basic needs,” she said.

Where ‘Hospital Food’ Takes On A New Meaning