A new government analysis has found that hospital readmission rates of Medicare patients have fallen more than previously reported, bolstering hope that hospitals are having some success at tackling this stubborn and expensive problem. 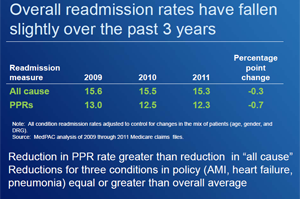 Hospital readmissions have been getting extensive attention as a new penalty program kicks in next month, which will cost hospitals as much as 1 percent of their regular Medicare reimbursements.  The Obama administration has set a goal of reducing readmissions by 20 percent, which would save more than $2.5 billion in a year, according to the Medicare Payment Advisory Commission, or MedPAC, an independent agency that advises Congress.

Medicare will dock 2,211 hospitals—two out of every three — some of their reimbursements if their readmissions for heart failure, heart attack or pneumonia patients between July 2008 and June 2011 were too high. MedPAC estimated that the average penalty will be about $125,000. A total of 278 hospitals will have their readmissions reduced by the maximum amount. Those include the University of Miami Hospital in Florida, Boston Medical Center,  Tufts Medical Center in Boston, and Henry Ford Hospital in Detroit. (You can look for individual hospitals here or download the list over here.)

Hospitals have been insisting that they are making strong efforts to reduce the numbers of patients who return, but for the most part there’s been little evidence of dramatic improvements. The MedPAC analysis, however, shows a drop, albeit small. MedPAC calculated that Medicare readmissions within a month of discharge fell 0.7 percent between 2009 and 2011, from 13.0 percent of Medicare patients to 12.3 percent.

That’s a steeper decline than the 0.2 percent decrease that analysts at the Centers for Medicare & Medicaid Services estimated earlier this year for the same time period. The difference is primarily due to the fact that MedPAC used a more refined method of measuring readmissions that counts only those patients who return to a hospital for problems that are clinically related to the initial hospitalization.  Medicare’s method counts all readmissions within 30 days of discharge, no matter the reason. When MedPAC looked at readmissions for any reason, it found that those fell by 0.3 percent between 2009 and 2011. That was in the neighborhood of what Medicare found.

“It appears from what we hear in the field that hospitals are increasing their efforts to reduce readmissions as we move closer to the start of the readmission penalty,” Jeffrey Stensland, a MedPAC analyst, told the commission last week. “Therefore, it appears that the penalty is serving its purpose of motivating hospitals to take action.”

Medicare data published on the Hospital Compare website shows virtually no reduction in readmission for the three common conditions that Medicare is using to set its penalties. But here too, MedPAC found decreases, according to Craig Lisk, a MedPAC analyst who testified before the commission. He said that readmission for those conditions have dropped more than overall reductions. “There appears to be some evidence that hospitals are starting to preferentially reduce readmissions for these three conditions,” Lisk said.

The differences in how to count readmissions is more than just a wonky debate. Different methodologies calculating hospital readmissions could mean tens of thousands of dollars in greater or lower Medicare payments for individual hospitals. The hospital industry has been urging Medicare to exclude from penalty calculations any readmissions that aren’t related to a patient’s initial stay, similar to what MedPAC did.