In the past, the only thing a patient was sure to get after a hospital stay was a bill. But as Medicare cracks down on high readmission rates, hospitals are dispatching nurses, transportation, culturally specific diet tips, free medications and even bathroom scales to patients deemed at risk of relapsing. 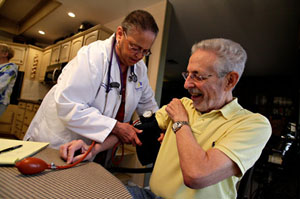 Sue Koner, a transition care manager for Sun Health, checks Ted Cohn’s blood pressure to try to prevent his readmission to a hospital for a heart condition (Photo by Joshua Lott for The New York Times/KHN).

Robert Wood Johnson University Hospital in New Brunswick, N.J., has nurses visit high-risk patients at their home within two days of leaving the hospital. Teresa De Peralta, a nurse practitioner who runs the program, said they frequently find that patients don’t realize a drug they were prescribed in the hospital does the same thing as one they have already been taking.

“When medications are changed, they don’t want to throw things out, they think it’s a waste,” Ms. De Peralta said. “We actually go through the cupboards and painstakingly write out in big letters what they should be taking during the day.”

Many hospital officials say their efforts to keep patients healthy after discharge have been spurred by new financial penalties Medicare started imposing in October on places with too many readmissions. Increasingly, hospitals are no longer leaving to patients the responsibility for setting up follow-up appointments or filling new prescriptions.

And hospitals are not assuming that personnel in nursing homes and other facilities know how to properly care for their patients and follow the hospital discharge instructions.

Patients taking the wrong dose or mixing medicines that react badly often end up back in the hospital. A survey of 377 elderly patients at Yale-New Haven Hospital, published this year in The Journal of General Internal Medicine, discovered that 81 percent of the patients either didn’t understand what all their prescriptions were for; were prescribed the wrong drug or the wrong dose; were taken off a drug they needed, or never picked up a new prescription.

Dr. Leora Horwitz, the study’s leader, said patients who were called a week after their discharge and were asked what changes to their medication they were supposed to make “overwhelmingly” couldn’t tell them.

A big part of reducing readmissions is making sure that patients understand early warning signs that their health is deteriorating. Sun Health Care Transitions, a foundation-supported program in Sun City, Ariz., gives scales to some patients with congestive heart failure because small weight gains indicate they are retaining water, a sign that their heart isn’t pumping adequately.

“We have them keep a log,” said Jennifer Drago, a Sun Health vice president. “We want them to be looking for a two-pound daily weight gain, or five pounds over the week.”

Patients whose weight creeps up are quickly sent back to their doctor. Debra Richards, director of case management at Banner Del E. Webb Medical Center, one of the hospitals Sun Health is assisting, said, “That program has helped us quite a bit.”

Shady Grove Adventist Hospital in Rockville, Md., has started taking patients’ cultural backgrounds into consideration when doling out advice about maintaining their health. For example, the hospital encourages Salvadoran patients to substitute olive oils for the palm oils their cuisine traditionally calls for, to roast or bake meat instead of frying it and to use sugar substitutes when making horchata, a popular Central American drink.

When Hackensack University Medical Center sent staff members to teach caregivers how to take care of their patients, one place “didn’t even know what a low-salt diet was,” even though that’s a critical part of keeping heart failure patients from retaining fluids, said Dr. Charles Riccobono, chief quality and safety officer at the New Jersey hospital.

Aurora Health Care, a Milwaukee-based health system, now places its own nurse practitioners in several nursing homes to watch over Aurora’s discharged patients. Aurora says readmission rates of those patients have decreased, in some months by as much as half.

Dr. Eric Coleman, a Denver geriatrician whose ideas on reducing readmissions have been adopted by a number of hospitals and Medicare, said that while some hospital changes are “exciting and new,” others are “relabeling old wine in new bottles.”

“Yesterday we had ‘discharge planning’ and today we have a ‘rapid response transition team,’ and content-wise they’re doing the same thing,” Dr. Coleman said. “But it’s a nice thing to report out to the board of trustees.”