While Ebola stokes public anxiety, more than one in six hospitals — including some top medical centers — are having trouble stamping out less exotic but sometimes deadly infections, federal records show.

Nationally, about one in every 25 hospitalized patients gets an infection, and 75,000 people die each year from them—more than from car crashes and gun shots combined. A Kaiser Health News analysis found 695 hospitals with higher than expected rates for at least one of the six types of infections tracked by the federal Centers for Disease Control and Prevention.  In 13 states and the District of Columbia, a quarter or more of hospitals that the government evaluated were rated worse than national benchmarks the CDC set in at least one infection category, the KHN analysis found.

The missteps Texas Health Presbyterian Hospital made this month in handling an Ebola patient echo mistakes hospitals across the nation have made in dealing with homegrown infections. Dr. Kevin Kavanagh, a patient safety expert from Kentucky, said hospitals too often don’t strictly follow protocols to deal with infectious diseases, and the government’s standard responses are not specific enough. “Right now there are too many recommendations on how to handle infectious diseases, too much leeway,” he said. 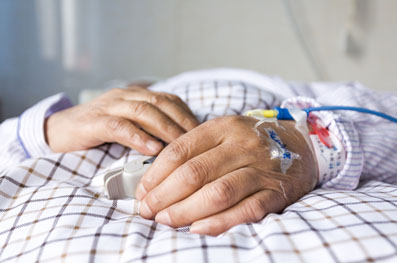 A 2011 study in the New England Journal of Medicine underscored the problem, observing that while hospitals have reduced the frequency of many infections over the last decade, they could do better if staff complied with recommendations. Those include always washing their hands and using maximal barrier procedures when tubes are being inserted, such as covering patients from head to toe with a sterile drape and wearing sterile caps, masks gowns and gloves.

“The percentage of time that health care providers do all of the things they are supposed to do when caring for a patient with a contagious disease can be pretty low,” said one of the authors, Dr. Don Goldmann, chief medical and science officer at the Institute for Healthcare Improvement, a nonprofit in Cambridge, Mass. “There’s a lot of room for improvement.”

Goldmann said that hospitals tend to become more focused on following procedures when facing novel, highly publicized outbreaks such as Ebola. “When [an infection risk has] been around for a long time, it kind of becomes part of the background,” he said.

Since 2012 the federal government has been analyzing and publishing the CDC rates for specific hospitals on Medicare’s Hospital Compare website. Starting this fall, Medicare is considering infection rates when deciding how much to pay hospitals.

States with more than a quarter of hospitals having at least one high infection rate in the CDC data were Arizona, California, Colorado, Connecticut, Florida, Massachusetts, Montana, Nevada, New Jersey, New York, Rhode Island, South Carolina and Utah, according to the KHN analysis of the most current CDC records.

Three highly regarded institutions—New York-Presbyterian Hospital in Manhattan, Geisinger Medical Center in Danville, Pa., and the University of Michigan Health System in Ann Arbor—were among seven hospitals the CDC rated as having worse rates for four of the six infections, KHN found.

The CDC data, based on reports hospitals submit, are considered the most reliable assessments that exist. Still, many hospitals the CDC judged as having worse rates disputed those verdicts. They said that they look bad because they are more vigilant in identifying and reporting infections, or because they handle very sick patients who are more prone to catching a bug.

For instance, Dr. Darrell Campbell Jr., chief medical officer at the University of Michigan Health System, said hysterectomies are performed on cancer patients at four times the rate than at other Michigan hospitals that compare information with each other. Because cancer surgeries take longer than regular hysterectomies, often involving removal of pelvic lymph nodes, the chances of infection are greater, he said.

“When you adjusted for the cancer, we don’t look different from any of the hospitals,” he said. Campbell said none of Michigan’s infection rates deserved being rated poorly.  “Eventually, we’ll get where we are more comfortable with this data, but we’re not there now,” he said.

New York-Presbyterian said in a statement it has made “significant improvements.” Geisinger said in a statement that its infection rates have dropped since 2012 and that its MRSA rate appeared high because the hospital made a “data entry error” when it reported cases to the government. Geisinger also noted that many patients who test positive for C. diff never develop any symptoms, but hospitals still must report it as an infection.

Others are succeeding in controlling some infection types but not others, according to the CDC data. Yale-New Haven Hospital had lower rates of bloodstream infections caused by central lines, but higher rates of infections from catheters inserted into the bladder to remove urine. Since one of the main ways to avoid such infections is to remove the catheter as soon as it is not essential, the hospital now allows nurses to take them out without a physician’s order under certain conditions, said Dr. John Boyce, the hospital’s director of epidemiology and infection control. “Busy physicians sometimes forget their patient has a catheter in, but the nurses know,” he said.

Battling C. diff is very different than fighting Ebola and in some ways harder, because it requires hospitals to restrain use of the antibiotics necessary for so many patients. When those drugs eliminate weaker bacteria from the intestines, C. diff is able to prosper. Patients can get massive diarrhea and, while C. diff can be treated, the worse cases may require surgery to remove the infected part of the intestines.

Other infections for which the CDC tracks but does not yet publish hospital-specific rates, known as gram negative, are impervious to nearly all antibiotics.

Reducing the frequency of C. diff and these kinds of infections requires hospitals to become more judicious in deploying antibiotics. But only about half of hospitals have established stewardship programs that help doctors use the appropriate antibiotics in the most effective doses without overdoing it, researchers say.

“We have increasing amounts of data that thirty to fifty percent of the antibiotics we are prescribing are inappropriate,” said Dr. Kavita Trivedi, a consultant and former infection control official for California. “It sounds crazy to people who are not in medicine: Why would a patient be prescribed an antibiotic they don’t need? But it happens frequently because we don’t know what they need.”