Despite the warm reception from members of the Senate HELP panel, Republican senators had tough questions for Sylvia Mathews Burwell about implementation of the health law. Mary Agnes Carey and CQ Roll Call’s Melissa Attias discuss what’s next for the nomination.

>>Click here to listen to audio of the conversation

MARY AGNES CAREY: Welcome to Health on the Hill. I’m Mary Agnes Carey. Sylvia Mathews Burwell, President Obama’s nominee to head the Department of Health and Human Services (HHS), got some tough questions — as well as much praise — from Senate Republicans today during a hearing on Capitol Hill. Melissa Attias of CQ Roll Call was there and joins us now. 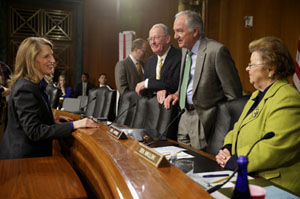 Today was the first of two confirmation hearings for Burwell, who has been nominated to replace HHS Secretary Kathleen Sebelius. As was widely expected, Republicans on the Senate Health, Education, Labor and Pensions panel asked Burwell several questions about how she would handle implementation of the health law and whether or not she would work to change some parts of the law. Can you take us through that?

MELISSA ATTIAS, CQ ROLL CALL: Senator Alexander, who is the top Republican on the HELP committee asked a series of questions to try to put Burwell on the record about what changes she might consider making to the law. One thing he asked about was whether she’d be willing to further extend the policy that allowed some people to keep their health plans that were not compliant with the health care law’s regulations.

Burwell said those changes were part of a transition period as part of a new system. When Sen. [Lamar] Alexander prompted her for a yes-or-no answer, she basically said she would want to see what happens with implementation. And that was sort-of the pattern with all of these questions from Republicans. She expressed a willingness to work with everyone, but didn’t make any strong commitments.

Sen. Alexander also asked her about buying coverage across state lines and giving more flexibility to states for their Medicaid programs. And Sen. [Pat] Roberts asked her about if her end game was to expand the health care law so that it became a single-payer system in the country, and Burwell said she is going to implement the law and that is was a market-based system.

Another thing that Sen. Roberts of Kansas asked about was that he expressed concern about a panel that created in the law, which actually remains unfilled. President Obama hasn’t appointed anyone to serve on it yet, but it’s an Independent Payment Advisory Board, which was created in the law to make recommendations to cut Medicare if spending goes over a certain growth rate. But Burwell said it’s not expected to be triggered when she would serve.

MARY AGNES CAREY:  Another Republican Senator Mike Enzi asked about the backend of heathcare.gov and that’s the part of the website that talks with insurers. He wants to know when it would be completed. Did she give a timeframe?

MARY AGNES CAREY:  Another Republican Senator Tim Scott asked that if confirmed, would Burwell and this is his wording: “Would she serve as an ambassador for Obamacare or a secretary of HHS?” How did she respond to that?

MELISSA ATTIAS:  She said that her objective is to serve the American people first and foremost. She also said that she thinks that the president’s policy is lined up with that goal.

MARY AGNES CAREY:  We’ve talked about some of the tough inquiries she received; she also got a lot of praise not only from Democrats, but from Republicans. Could you talk a little bit about that?

MELISSA ATTIAS:  It was clear that everyone on the panel seemed to have respect for her as an individual and for her experience, and her background particularly her tenure at the Office of Management and Budget where she is currently director and also her experience in the private sector. And when things got a little more critical was when the discussion turned to the health care law, but it was the law and not the nominee that was getting most of the push back.

MARY AGNES CAREY:  Speaking of the health care law, one of the Democrats on that Senate panel, Kay Hagan who is currently in a tough reelection race where the health law is an issue, she asked about lessons learned about implementation of healthcare.gov.

MELISSA ATTIAS: Sen. Hagan asked a question about what Burwell learned from the launch last fall. And, basically, Burwell said she wanted a more integrated approach that connected IT with the agency itself. And she also talked about having a more iterative approach with testing in small pieces, so that there are opportunities to learn as you go forward. And she also talked about ownership and accountability and that she wants to see a single individual overseeing this integration.

MARY AGNES CAREY: Did Burwell say what she wants to accomplish for the agency as a whole if she is confirmed to be the HHS secretary?

MELISSA ATTIAS: I think she gave pretty broad remarks today, but she just talked a lot about transparency and accountability in terms of the agency overall.

MELISSA ATTIAS: As far as I’m told, that hearing has not yet been scheduled.  But I think it is expected soon. They received her completed paperwork on that panel and are reviewing it.

MARY AGNES CAREY: And then after Finance Committee, where her nomination is expected to be approved, what happens then?

MELISSA ATTIAS:  Then she would head to the floor, where she would get a vote from the full Senate. And, due to the rules changes that were pushed forward to the Senate rules last year, she’ll only need a majority. Even if there were Republican opposition, she would be expected to be confirmed.

MARY AGNES CAREY:  It’s also fair to note when her confirmation vote came up to run the Office of Management and Budget, I think she was confirmed something like 96-0, right?

MELISSA ATTIAS:  Yes, it was unanimous.

MARY AGNES CAREY:  Thanks so much for your help, Melissa Attias, CQ Roll Call.

MELISSA ATTIAS:  Thanks for having me.

Bipartisan Praise For Nominee To Lead HHS In Senate Hearing