Mary Agnes Carey talks to Joanna Kerpen, a partner at the law firm McDermott Will & Emery, about the role of the IRS in implementing and enforcing provisions of the health law after recent revelations the agency inappropriately targeted conservative groups that were seeking tax-exempt status.

>> Listen to audio of this interview.

MARY AGNES CAREY: Good day, this is Health on the Hill. I’m Mary Agnes Carey. The role of the Internal Revenue Service in implementing the 2010 health care law has come under fire on Capitol Hill. Recent revelations that the IRS has inappropriately targeted conservative groups seeking tax-exempt status has caused some Republicans to say that the agency can’t be trusted to implement the health care law. Many Americans may not even realize that the IRS has a role in the health law, also known as the Affordable Care Act. With us today to discuss the issue is Joanna Kerpen of the law firm McDermott Will & Emery. Thanks so much for joining us.

JOANNA KERPEN: Thank you for having me.

MARY AGNES CAREY: Before we talk about the IRS, we should say that it’s not the only federal agency overseeing the health care law. What are the other agencies and how do they interact with the IRS?

JOANNA KERPEN: Well, because the health care reform law made such sweeping changes to not only the Internal Revenue Code, which the IRS is responsible for, but also to ERISA and the Public Health Services Act, the Department of Health and Human Services and the Department of Labor have been, and will continue to work with the IRS in implementing the changes made by the health care reform law and enforcing a lot of the provisions. However, that being said, because there have been such a great amount of changes to the Internal Revenue Code, the IRS has a very substantial role in implementing the changes under the health care law and enforcing them.

MARY AGNES CAREY: So moving to the IRS, what are the agency’s  responsibilities concerning individuals and the health care law?

JOANNA KERPEN: Well, for example, in 2014, individuals are going to be required to carry a minimum level of health insurance coverage or be subject to a penalty. The IRS will be the agency that is responsible for enforcing that penalty and collecting the amounts from the individuals. In addition, as part of the minimum coverage requirement for individuals and the minimum coverage requirement that employers be required to provide to individuals, there will be the need to determine whether or not individuals are eligible for a health insurance premium tax credit, and the IRS will have the responsibility for determining who is eligible for the health insurance premium tax credit. 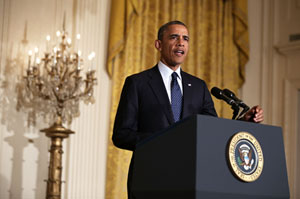 MARY AGNES CAREY: The law also places some new responsibilities on employers.  What are they and how is the IRS involved?

JOANNA KERPEN: There are several new requirements for employers that interplay with the IRS’s enforcement provisions and governing provision. In 2014, for example, employers are now going to be required to provide coverage that is affordable to employees. And if they do not provide this coverage, they will be subject to a penalty. The IRS is responsible for setting out the rules and guidance for employers in providing this coverage as well as enforcing the rule and collecting the penalty payment from the employers.

In addition in 2018 there will be a tax on what they call Cadillac plans, the high value cost coverage that can be provided to individuals, and the IRS will be responsible for enforcing that rule and collecting any penalties for coverage in excess of the Cadillac plan tax limit. In addition, starting in 2012, which would have been the W2 that was provided in January 2013, employers were now required to include certain information on annual W2s, specifically the value of the group health plan benefits. So beginning with that W2 that was provided in 2013, the IRS has now been tasked with  recording all the values of the group health plan benefits that have been recorded on the W2s.

MARY AGNES CAREY: Republicans on Capitol Hill have said that the current controversy over excessive IRS scrutiny of some conservative nonprofits means that the IRS can’t be trusted to implement the Affordable Care Act in a fair manner. Do you think that those arguments will have any lasting impact on implementation of the health care law?

JOANNA KERPEN: I can’t speak to whether or not the arguments will have any impact on the implementation. However, I just think that the recent events and disclosures by the IRS of the conduct shows that it is in fact possible for the IRS to behave in this manner. However, that doesn’t mean that they are going to in the future and with regards to the future requirements that are coming out.  But you never know.

MARY AGNES CAREY:  That’s absolutely true. In Washington, you never do know.  Thanks so much Joanna Kerpen of the law firm McDermott, Will & Emery.

The IRS’ Role In The Health Law Comes Under Scrutiny