Which hospital parents pick to deliver their baby can have serious cost consequences, according to a new study. 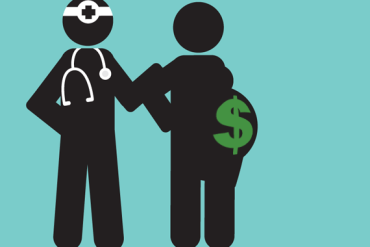 Hospital costs for women who had no maternal or obstetric risk factors to complicate childbirth ranged from less than $2,000 to nearly $12,000, the analysis of discharge data found. The wide variation in cost means that for expectant parents, it can pay to shop around.

The variability was surprising, says study co-author Dr. Jessica Illuzzi, an associate professor of obstetrics, gynecology and reproductive sciences at the Yale School of Medicine.

“We limited our sample to low-risk women, a uniform group, so finding that variability” was unexpected, she says.

The study, published this month in Health Affairs, analyzed data from 267,120 births at 463 hospitals that were collected from the 2011 Nationwide Inpatient Sample, part of a project sponsored by the federal Agency for Healthcare Research and Quality. Estimated average hospital childbirth facility costs per maternity stay ranged from $1,189 to $11,986, with a median of $4,215. The figures did not include professional fees for obstetricians, midwives or anesthesiologists, who generally bill separately for their services.

Since consumers increasingly face high deductibles and increased cost sharing for medical care, giving birth at a high-cost hospital could add significantly to their out-of-pocket costs, Illuzzi says. Some government agencies and other organizations now report data related to childbirth, including cesarean delivery rates and details about delivery costs and charges by hospital.

The federal government’s Hospital Compare website reports the percentage of pregnant women who had elective deliveries one to three weeks early that weren’t medically necessary.
The study found that hospitals with higher rates of cesarean deliveries, among other factors, were more likely to have higher facility costs. Hospital rates of cesarean delivery for low-risk births varied widely, from 2 percent to 39 percent, the study found.

According to the study, pricier care didn’t necessarily lead to better outcomes. Hospitals with higher estimated costs were significantly more likely to have serious complications among low-risk childbirths.

The study notes that adding professional fees to the cost estimates and including newborn care in addition to maternal care might result in different cost patterns than those found in the study.
Nearly 4 million children are born each year, and childbirth is the No. 1 reason for hospital admissions.

“There’s so much attention being paid to the cost of care today, but little attention is paid to maternity costs, the leading cause of hospitalization,” Illuzzi says.

How Much Does It Cost To Have A Baby? Hospital Study Finds Huge Price Range