This story is part of a partnership that includes WNPR, NPR and Kaiser Health News. It can be republished for free. (details)

Dr. Jack Ross is used to seeing potentially lethal viruses, and he is used to putting patients into isolation. Still, Ebola is different. 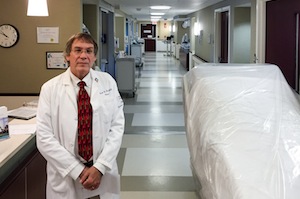 “I think, for any hospital today, Ebola represents one step higher than anything else, if we had to do it,” says Ross, who is the director of infection control for Hartford Healthcare’s five hospitals in Connecticut.

On a tour of one of them, Hartford Hospital, Ross explains how the layout of the building is one of the important factors in his Ebola control plan.

“This would be an area that we would close off with plastic sheeting,” Ross says. His plan  includes the emergency room, intensive care unit and patient floors. “Right here, we’d have a security officer, because you want to restrict visitors. You want to have a log of who goes in, who goes out.”

In Connecticut, the idea of taking care of an Ebola patient is still just theoretical. However, one of the reasons that public health officials in the U.S. are confident that American hospitals could contain an outbreak is because they can accommodate the isolation and sanitation needed to keep the virus from spreading.

The best place to put someone who falls ill, for instance, is ideally at the end of a hall in a room with its own bathroom, anteroom, and entrance. “The rest of the floor is safe,” Ross says. “I limit the amount of traffic. I’m able to do the care there.”

Ross and his team are preparing in other ways, too. With the Centers for Disease Control and Prevention’s help, he’s made a specific list of questions doctors and nurses will ask incoming patients about symptoms and travel. He’s inventoried the supplies they would need to treat an Ebola patient.

Ross says he understands the concern of the general public when it comes to Ebola — the symptoms and severity of the illness are frightening. But he also says this — Ebola might frighten the general public, but the virus doesn’t threaten the American public.

“This is not something that will become established in the local general American population,” Ross says. In the United States, the medical infrastructure is strong enough to detect and diagnose the infection relatively quickly, trace contacts, isolate patients with symptoms and offer them supportive treatment. And, in comparison to flu or measles, for example, the Ebola virus is not spread through the air, and is not very contagious. The people at risk of catching Ebola are those who have been in close, unprotected contact with someone who is sick and has active symptoms of the disease.

Indeed, the only known case of Ebola that has been transmitted outside of a West African country is a nurse in Spain who fell ill after caring for two missionaries who contracted the disease in Africa, came to Spain for treatment and eventually died. While anyone in close physical contact with a symptomatic patient is at some risk, the evidence suggests that the people most likely to be exposed to these isolated cases are health care workers.

For that reason, even if the chances of running into Ebola in the U.S. are relatively small, Ross says hospital workers have to be painstakingly vigilant. That begins with the triage questions nurses and doctors ask incoming patients get when they arrive at the emergency room, and at various other times throughout their treatment.

If a patient is diagnosed, health care workers treating an Ebola patient need to wear a face mask or goggles, and they also need a buddy with them as they put on and take off their protective clothing. All of that is to make sure that they don’t come into any contact with bodily fluids.

The gear used to care for an Ebola patient — the goggles, the clothing, the bed linens — then becomes contaminated waste that has to be treated and sterilized in much the same way as tools being prepared for use in the operating room. Just how that’s accomplished will be done on a case-by-case basis, governed by the CDC and the federal department of transportation.

Ross’s decades of work in infectious disease make him feel prepared. Still, he says he expects to be nervous if and when he treats a person with Ebola.

“My heart may be pounding, my palms may be sweating,” he says. “I think it’s only a natural human response that we would have heightened awareness and some nervousness as we go through this.”

Ross says he’d be concerned about any caregiver treating Ebola who wasn’t nervous, too.

How One U.S. Hospital Braces For Ebola