As the smoke thickened near her home in Santa Cruz, California, last week, Amanda Smith kept asking herself the same questions: Should we leave? And where would we go?

The wildfire evacuation zone, at the time, ended a few blocks from her house. But she worried about what the air quality — which had reached the second-highest warning level, purple for “very unhealthy” — would do to her children’s lungs. Her 4-year-old twins had spent time in the neonatal intensive care unit; one was later diagnosed with asthma, and last year was hospitalized with pneumonia.

By Tuesday, said Smith, “we all had headaches, the kids were coughing a little bit, and it was raining ash.” The family had been conscientiously isolating at home because of the COVID pandemic, and leaving meant potential exposures. But on Wednesday, Smith said, “I looked at my partner and said, maybe we should leave.”

She called a friend in Orange County, about 380 miles south, who offered her parents’ empty condo. But the next day, the friend’s child spiked a fever — a possible case of COVID-19 — and the plan fell through amid the distraction. 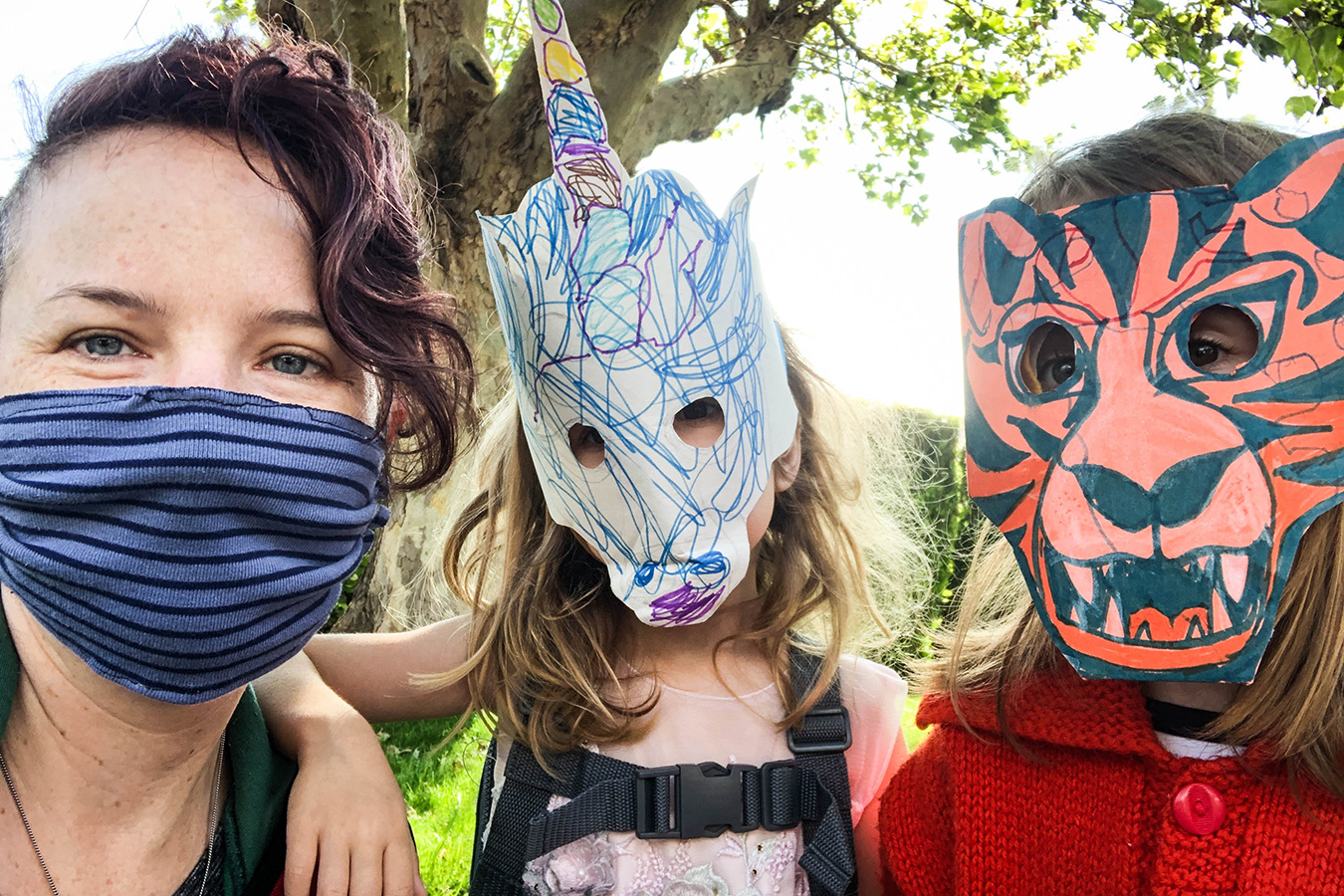 Amanda Smith takes a selfie of herself and her twin children in Santa Cruz, California, in April. (Amanda Smith)

So Smith looked on Airbnb, careful to seek out hosts who detailed their COVID precautions, and found an apartment in San Bruno, about an hour’s drive north. She stuffed photos and documents into a suitcase, grabbed the go-bags, and her family headed out.

“It’s coming out of our savings to stay here,” Smith said from the safety of her apartment rental, which runs about $1,150 a week. “It was a really fraught decision to leave, but as soon as we got over the hill and the sky was blue, I took a big sigh of relief and knew that it had been a good decision.”

As the twin disasters of COVID-19 and fire season sweep through California, thousands of residents like Smith are weighing difficult options, pitting risk against risk as they decide where to evacuate, whether from imminent flames or the toxic air. Amid a virulent pandemic, which is safest? Doubling up at a friend’s home? A hotel? An evacuation center? And when do the risks of smoke inhalation outweigh the risk of a deadly infection?

“Obviously the most important thing is for people to do what they can to protect their lives, not only from the fire, but also from COVID,” said Detective Rosemerry Blankswade, public information officer for the San Mateo County Sheriff’s Office, which is helping coordinate response to the massive CZU Lightning Complex fires.

“You have to evaluate the big picture here. If fire is your most imminent danger, maybe take the COVID risk. But if you can avoid both of them, that’s obviously going to be the best option. It’s kind of a little bit of triage that we’re asking for people to do in their own lives right now.”

In San Mateo, one of two counties where the CZU Lightning Complex fires are blazing, officials are advising people to head to an evacuation center, where county workers will assist them in finding a hotel room. Meanwhile, in neighboring Santa Cruz, where tens of thousands of residents have evacuated and shelters have limited space, officials are asking those under orders to leave to stay with family and friends whenever possible.

What’s the right choice when all options pose additional risks? We spoke with several experts to help guide your thought process.

You have to evacuate: Where should you go?

If your region is under an evacuation order, do not hesitate. Leave immediately. If you can afford it, booking a room at a hotel or motel outside the evacuation zones may be the best option, said Dr. Michael Wilkes, a professor at the University of California-Davis School of Medicine. They almost always have air-conditioning units, which help filter the air from both smoke and virus. Many hotels are implementing new cleaning processes; ask staffers to detail what they’re doing to sanitize rooms, and consider skipping the daily cleaning service during your stay. You might also check review sites such as TripAdvisor to see what other guests report. When possible, avoid the lobby and other shared spaces, and opt for contactless check-in. 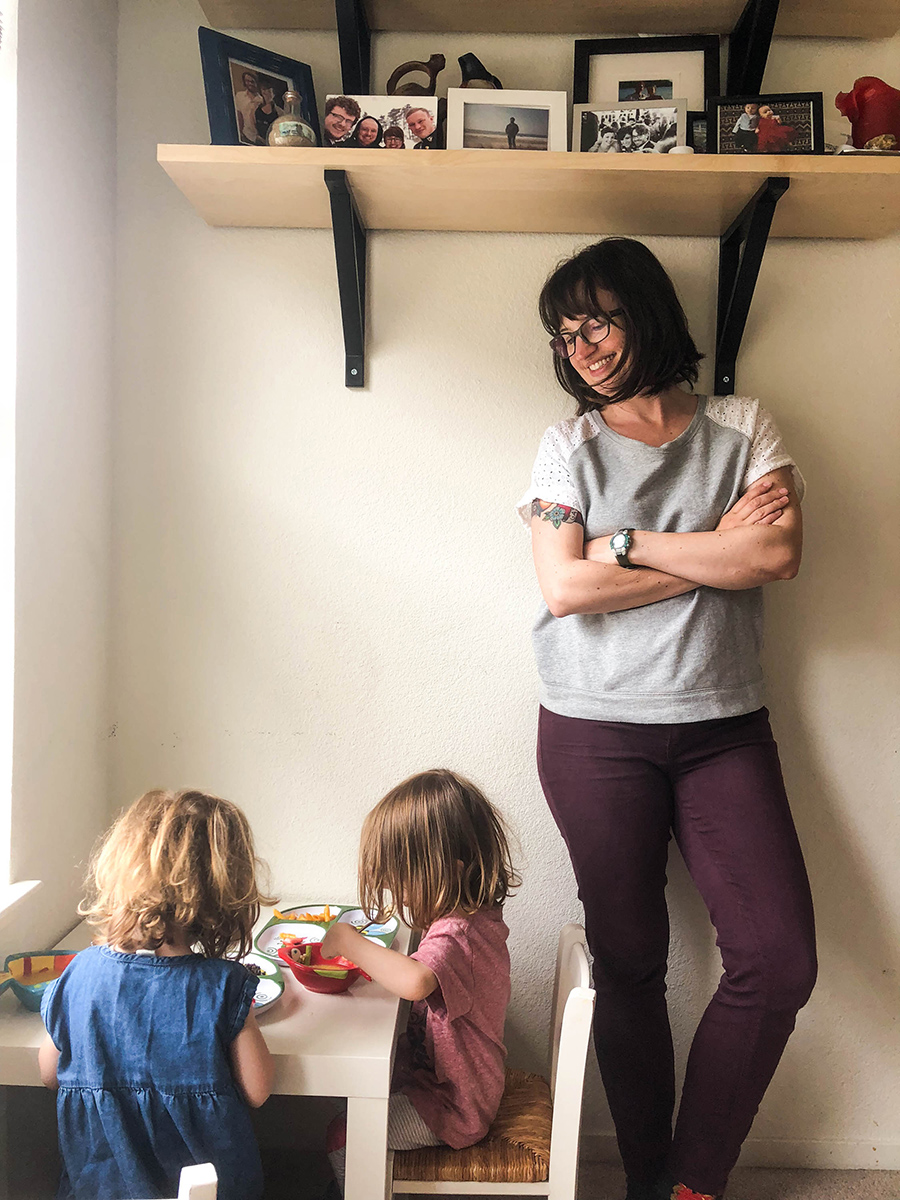 Amanda Smith at home in Santa Cruz, California, with her twin children. Smith and her family decided to voluntarily evacuate their home on Aug. 20, due to heavy smoke in the area from the CZU Lightning Complex fires in the nearby Santa Cruz Mountains. (Anna Maria Barry-Jester/KHN)

With so many people in Northern California fleeing the fires, many hotels are already full, especially in more remote areas. So what about staying with family or friends? After months of being shut in and avoiding close contact beyond immediate family, moving into someone else’s home means a host of potential exposures. Consider whether you or anyone else in the home is at high risk from COVID-19 because of age or a preexisting condition.

“If so, that’s a reason to think twice before going to someone’s home,” said Dr. Gina Solomon, a program director at the Oakland-based Public Health Institute.

Consider, too, what precautions your friends or family have been taking. Sheltering with someone whose job brings them into frequent contact with other people may not be as safe as sheltering with people who largely have been staying home. Another question is how crowded the home is: If you have your own room and, preferably, your own bathroom, that makes staying with friends a better option. If a separate bedroom is not available and smoky skies are not a problem, you might consider pitching a tent in their backyard.

For those with an RV or tent, camping can present another good option — although, with hundreds of wildfires burning across California, it may be challenging to drive far enough away to avoid fire and smoke. If you do camp, try to find a site away from wooded areas. And think twice before using group bathrooms.

Is an evacuation center safe?

Many counties have implemented new precautions at emergency shelters to prevent the spread of the coronavirus. In Santa Cruz, for example, officials are scaling back the capacity in each shelter to allow for social distancing, providing tents for people to use as shielding inside and allowing camping in the parking lots.

Still, staying in a shelter should probably not be your first choice. In terms of COVID risk, deciding between a hotel and a friend’s house is “nipping at the edges,” said Dr. John Swartzberg, a clinical professor emeritus at the UC-Berkeley School of Public Health, while “being in a congregate setting is only better than being completely exposed to the elements.”

If an evacuation shelter is your best immediate option, again, do not hesitate. “You have these standards you want to practice for yourselves,” Swartzberg said, “but when something worse comes along, it trumps how careful we can be with COVID because the need for shelter is greater.” You can lower your risk of infection by wearing a mask, washing hands frequently and sanitizing surfaces. 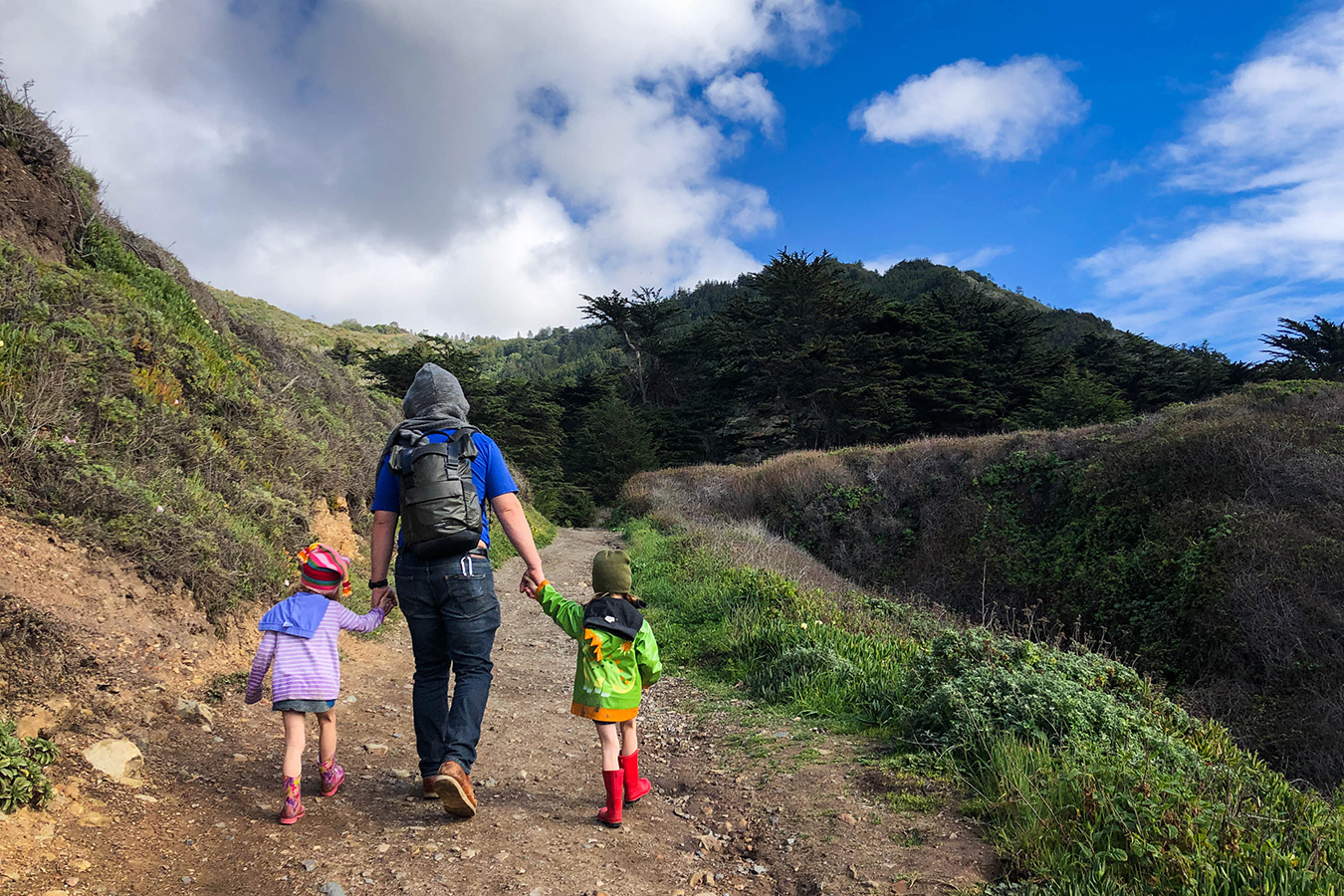 Smith’s partner, Grant Whipple, walks with their children in Big Sur on March 7. That was their last camping trip before the COVID-19 pandemic hit, Smith says; that area is now under threat from wildfire. (Amanda Smith)

If you aren’t in a fire zone, should you invite friends and family to stay with you?

Deciding whether to open your home to friends who are evacuating is an intensely personal decision and may depend on whether anyone in your family has a preexisting condition.

“I guess it depends on how good a friend they are and how desperate they are,” said Swartzberg. It may also depend on how much space you have; if your guests can have their own bedroom and bathroom, it might be safer.

If you do offer your home, experts advise against simply considering yourself a new pod with your guests. Instead, take steps to lower your chances of infection.

“It might not be pleasant, but wearing a mask anytime you’re not in your own bedroom is the safest way to go,” said Solomon. Stay outside as much as possible, she added, and consider eating meals outdoors or eating in shifts to avoid being maskless with those outside your family unit. Sanitize surfaces and wash hands frequently. If air quality permits, keep the windows open to improve airflow.

If you’re in a region with hazardous smoke conditions, should you leave?

If your area has dense smoke but no imminent fire risk, the thought of heading somewhere else may be appealing, especially if you have respiratory issues. But in most cases, Wilkes said, it would be safer not to leave your COVID bubble. And given the expanse of California’s fires, anywhere you flee could end up having lousy air quality by the time you arrive.

“The better part of rationality,” Wilkes said, “would be to stay at home, not exercise [outdoors], stay inside as much as you can, turn on the air conditioning.”