There has never been a welcome mat for abortion service providers in the Flathead Valley, a vast area that stretches over 5,000 square miles in the northwest corner of Montana. Susan Cahill began providing abortions in 1976 in the first clinic to offer the service in the Flathead.

“But that had an arson fire, and then we rebuilt that,” says Cahill, who performed abortions as a physician assistant for 38 years. “Then we had the anti-choice people try to arrest me for doing abortions when I wasn’t a doctor.”

The biggest blow occurred in March 2014. Police testified in a recent trial that Klundt took a hammer to the photos in Cahill’s office, poured iodine on the floor and tossed files from cabinets. Klundt damaged the building’s heating and plumbing and discharged a fire extinguisher. He said he broke into the clinic looking for prescription drugs.

Everything was destroyed in Cahill’s clinic.

The clinic was in Kalispell, population 20,000. It’s the hub of the Flathead Valley, and the largest employer is Kalispell Regional Medical Center. In a town full of health care professionals, Cahill was the only one providing abortions.

“Because I was the only one, I got targeted,” she says.

Cahill’s clinic was a general family practice; her patients have had to find other health care. For abortion care, the options are more limited.

According to the Guttmacher Institute, in 2008 about a third of American women seeking access to abortion services traveled more than 25 miles to get them. Today, a woman in Kalispell has to drive 120 miles — each way — to Missoula to get an abortion. And some women are doing just that, says Melissa Barcroft, of Planned Parenthood of Montana, in Missoula.

The loss of Cahill’s clinic has been frustrating, Barcroft says.

“I know from talking with our providers that we have seen a definite increase of patients from the Flathead area,” she says.

Cahill says she worries most about poor women, or those from the town of Browning, on the Blackfeet Indian reservation.

“The disadvantaged are always the ones that lose,” Cahill says. “Now you’ve got people who are on Medicaid, or who are from Browning, and are teenagers.” It can be much harder for them to get to Missoula, she says. “I used to give gas money for people to go home. Now … it is just a harder struggle for them.”

Samantha Avery trained under Cahill at All Families Healthcare. At the time, Avery thought about going to medical school to pursue a career like Cahill’s.

“I know that she wanted me to be the one to take over her clinic,” Avery says. “End even before all of this, I told her, ‘I just don’t know if I could do that to my family — my future family. I can’t be the Susan Cahill. I’m not that brave of a person.’ ” 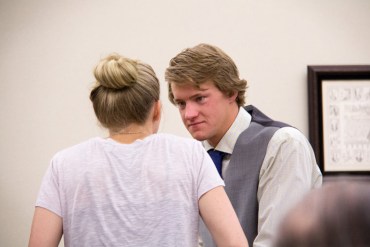 Zachary Klundt and his sister in court. (Photo by Corin Cates-Carney/MTPR)

Avery decided instead to work for the Public Health Department in Flathead County. She says it was hard for her to watch Cahill lose everything so quickly. The weight of the community’s opposition to abortion is difficult to counter, she says — citing Zachary Klundt, who was convicted in the attack against the clinic, as just one example.

Klundt’s mother was on the board of Hope Pregnancy Ministries, which advocates for alternatives to abortion. She resigned after the attack.

Michelle Reimer, the executive director of Hope Pregnancy Ministries, says that what happened to Cahill and her clinic was terrible, and totally against her group’s mission.

“There is not a place for it in a Christian organization,” Reimer says. “There is always going to be the outlier, the one who represents us poorly, or who says the wrong thing, or — as we all would with a very volatile topic like abortion — expresses [himself or herself] passionately rather than logically. And I think we see that on both sides.”

Reimer says at the core of her faith is compassion — and telling a woman that regardless of what she chooses, she is loved.

In June, Klundt was sentenced to 20 years, with 15 years of that suspended. He was also ordered to pay restitution. In the courtroom, Klundt read Cahill an apology.

“I cannot even believe I did that to another soul,” he says. “But I did that to you. I know what it’s like to live with fear, and for me to do that to you is awful. And I am truly so sorry.”

He said his actions do not represent his faith.

For women in the Flathead Valley, Susan Cahill says, getting reproductive care is not any easier now that Klundt is sentenced. Her clinic is still gone.

This story is part of KHN’s reporting partnership with Montana Public Radio and NPR.

How Vandalism And Fear Ended Abortion In Northwest Montana