With nursing home residents at particular risk in the coronavirus pandemic, residents and their families and friends can discover which of the nation’s 15,000 facilities have been cited for infection-control violations in recent years through a Kaiser Health News lookup tool published March 12, 2020. 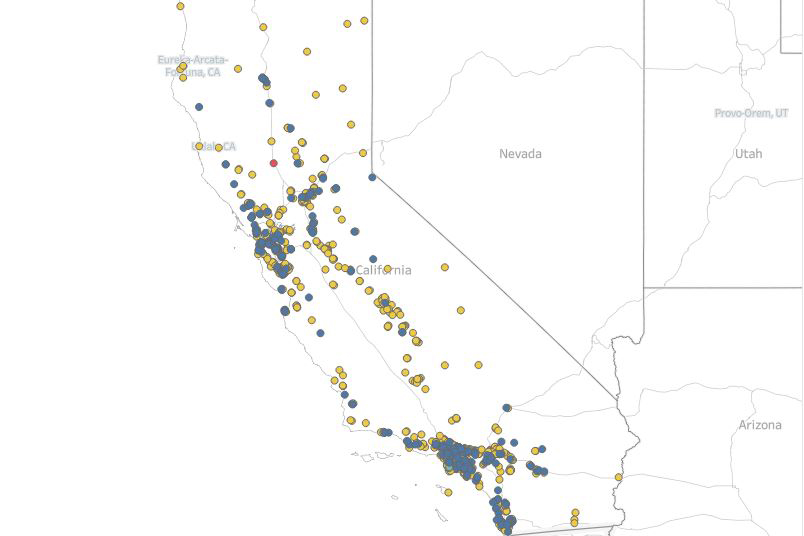 Use our interactive tool
This online map shows which of the 15,000 nursing homes in the U.S. have been cited for infection-control violations and how serious those infractions are.

More nursing homes have been faulted for failing to follow practices designed to prevent and control infections — such as staffers washing their hands before and after helping each resident and wearing gowns and masks around contagious patients — than for any other type of error. Such lapses have become matters of heightened concern with the spread of the coronavirus this spring, especially as the virus is a bigger threat to the elderly and those with underlying health conditions.

Despite their frequency, these citations rarely are reflected in the overall star rating Medicare assigns each facility on its Nursing Home Compare website. Even among nursing homes crowned with the maximum government rating of five stars for overall quality, nearly half have been cited for an infection-control lapse.

Health inspectors visit nursing homes every nine to 15 months for comprehensive evaluations. The KHN tool draws from a database of health inspection records during the past two regular survey cycles, which go as far back as 2016 for some facilities. The data also includes inspections initiated by complaints as well as those prompted by a problem a nursing home identifies.

The tool shows how often health inspectors have cited each nursing home for violating infection-control rules. It also shows the level of the most serious violation and the date it occurred.

Infections are a persistent challenge for skilled nursing facilities. As many as 3.8 million occur in homes each year, killing nearly 388,000 residents. Bacteria and viruses can spread through urinary catheters used by immobile patients and attack patients through soft tissues exposed as bedsores or wounds. Influenza and a serious infection caused by a bacteria known as MRSA (methicillin-resistant Staphylococcus aureus) can also spread from casual contact among residents and visitors. The infection threats have grown more serious with the spread of bacteria such as MRSA that are resistant to antibiotics.

The Centers for Medicare & Medicaid Services requires all nursing homes that accept government insurance payments such as Medicaid and Medicare to have a written plan to prevent and control infections. Each home must have a surveillance system to identify possible communicable diseases and contain them before they spread to other people in the facility and lay out the steps to report contagions to the authorities.

The program must instruct workers on all the precautions they should take to avoid contracting and transmitting diseases, such as washing hands, disinfecting equipment and distributing linens and cleaning laundry in a hygienic manner.

The program also explains when employees must wear protective equipment, such as gowns, masks and gloves, and tells them exactly how to don and remove the equipment. It must also describe when a potentially contagious resident should be isolated and how long that should last.

When inspectors visit a nursing home, either for a regular survey or in response to a complaint, they issue a deficiency if they see the nursing home not following its infection-control program. They also categorize its seriousness into one of these four levels, which the KHN tool identifies:

Level 4: Immediate Jeopardy, the most serious violation, is typically assigned when there is evidence that the home’s faulty practice is putting residents at continued risk. That could include actions such as staff failing to sanitize equipment used on multiple residents. Nursing homes must remedy the problem at once, unlike lesser citations, for which they generally have 10 days to provide regulators with their plan to correct the violations.

Level 3: Actual Harm is usually assigned, as its name suggests, when a failure to follow proper procedures led to a resident contracting an infection or sustaining another tangible injury. An actual harm deficiency might be issued, for instance, if a nursing home overlooked or failed to treat a case of scabies on a resident and it spread to other residents, causing severely itchy rashes.

Only about 1% of deficiencies are categorized as immediate jeopardy or actual harm. Both levels can incur federal or state fines or other financial punishments, such as Medicare refusing to pay for new admissions for a set number of days. On rare occasions, a nursing home can be banned from Medicare and Medicaid.

Level 2: Potential for Harm, the most common citation level, is issued when no resident was hurt but a deficient practice might lead to a greater-than-minimal injury. Inspectors might use this if they observed staff members not washing their hands properly or allowing linens or wound care supplies to touch potentially contaminated surfaces, such as a resident’s bed.

Level 1: Potential for Minimum Harm, the mildest violation level, refers to a deviation from safety rules that did not lead to a patient’s injury and carried the potential for minimal harm, at most. It can be issued against a nursing home that failed to review its infection-control and prevention plan at least once a year, for instance.

Nursing home inspection reports can be found on Nursing Home Compare. After you locate a home, select the “Health Inspections” tab and then click on the link near the bottom to view all details on health inspections, complaints and facility-reported issues.

How Well Does Your Nursing Home Fight Infections? Look It Up Here