Here’s more fodder for the debate over whether older, sicker members will swamp insurance plans created by the Affordable Care Act.

Insurers have wondered whether enough younger, healthier “invincibles” would sign up through online exchanges to subsidize folks with poorer health. The worry was that, without their premiums, expenses for older folks would drive up average costs and make plans less affordable.

Some have argued that an invincible gap might not be fatal thanks to the higher premiums paid by older members and, in the early years, the ACA’s financial safety netfor insurers. Now there’s evidence that, while far from conclusive, suggests young people may be initially joining in greater numbers than some insurers expected. 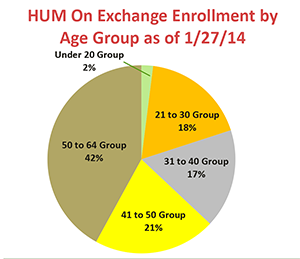 “While still early, as we analyze the demographics of our exchange membership, we are seeing enrollees skewing a bit more to the younger side,” Humana CEO Bruce Broussard told stock analysts on a Wednesday conference call.

About 35 percent of those who enrolled by the end of January were between 21 and 40, Humana said. That’s still below the portion of consumers that age in the general population.

About 82 percent of Humana’s new members are getting federal tax credits to help pay the premiums, Broussard said — many of them probably younger and with lower incomes.

More than 200,000 people had applied to Humana plans offered through the exchanges by the end of January, the company said.

The proportion of Humana’s younger exchange applicants has been slightly rising with time, bolstering arguments that younger consumers would wait to sign up until software in the online marketplaces was working well.

Last week WellPoint reported it had received about 500,000 applications for individual policies sold through the exchanges. Members were generally older than the general population, but not more than expected, WellPoint said.