NAMPA, Idaho – When Idaho’s largest hospital system bought the state’s largest doctor practice in 2012, the groups expressed hope that the deal would spark a revolution in delivering better-quality care.

Instead, it ignited a costly legal battle with state and federal regulators and rival hospital systems.

Officials at Boise-based St. Luke’s Health System thought they had the Obama administration on their side because the federal health law encourages hospitals to collaborate with doctors to improve quality and lower costs. 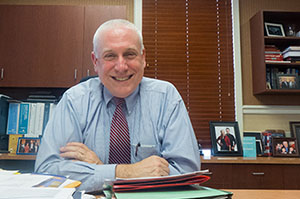 David Pate is president and CEO of St. Luke’s Health System. St. Luke’s is one of dozens of hospitals nationwide to form Medicare accountable care organizations, agreeing to coordinate care with the prospect of qualifying for government bonuses if they hit cost and quality targets (Photo by Phil Galewitz/KHN).

But the Federal Trade Commission filed suit, arguing that St. Luke’s purchase of the 43-physician Saltzer Medical Group in Nampa was anticompetitive and would lead to higher prices for Idaho patients.

A federal judge agreed in January, and his order to dissolve the merger has put this picturesque Boise suburb at the center of a national debate over the consolidation of American medicine. The decision pushed back against the merger mania gripping the health care industry, raising questions about whether larger health systems really do rein in spending and improve care, or whether they fuel higher prices in the long run.

Despite St. Luke’s good intentions, the judge worried the merged entity would be so dominant that it could raise prices at will. He suggested hospitals could work with doctors to deliver more-efficient care without buying them out.

Similar arguments are being raised in other markets, including Boston, Pittsburgh and Northern California, where hospital systems have gained strength through acquisitions of doctors’ practices and other hospitals at a time of rapid consolidation.

In the near term, the federal judge’s decision —which St. Luke’s plans to appeal — could slow hospitals’ acquisitions of physician groups. While hospitals may not hesitate to buy solo or small group doctors’ practices, they may be reluctant about
swallowing large groups like Saltzer Medical, which handled most of the primary care services in Nampa, Idaho’s second largest city.

“There will be higher caution in hospitals buying doctors’ groups when it looks like they have cornered the market,” said Robert Lawton Burns, chairman of the health-care management department at University of Pennsylvania.

While consolidation in the industry has been underway for decades, the pace has accelerated dramatically since the 2010 passage of the federal health care law. Hospitals and doctors’ groups have joined hands in part out of fear of funding cuts and in part, to position themselves for government bonuses. The bonuses are available to providers who agree to form “accountable care organizations,” which are rewarded for keeping Medicare patients healthy, rather than for the number of tests or procedures they do.

“The Affordable Care Act is pushing consolidation and working together, but the Federal Trade Commission and the Justice Department seem to be saying, ‘Wait a second, there are antitrust laws here,” said Robert Field, a law and health policy professor at Drexel University in Philadelphia. “The federal government has a schizophrenic attitude toward provider consolidation.”

FTC officials, however, deny there is any broad conflict between the Affordable Care Act and antitrust laws.

“The issues are in those small number of cases where collaboration occurs in a way that gives participants excessive marketplace power,” said Deborah Feinstein, director of the bureau of competition for the FTC.

She declined to say whether the FTC is stepping up antitrust enforcement, but noted that the agency is scrutinizing a number of consolidations.

“We have seen over the last couple of years, hospital-doctor combinations that are troubling to us,” Feinstein said, referring to hospitals that own doctors’ practices buying more doctors. “And we are looking at it.”

Despite the ruling, some experts say they expect the trend toward larger hospital-doctor systems to continue as providers respond to the health law and seek greater clout with insurers.

Burns said the health law is still driving providers together, as is uncertainty about a fast-changing health care marketplace and the belief that there’s “strength in numbers.”

In the fourth quarter of last year there were 20 such deals nationwide, according to research firm Irving Levin and Associates. Jackson Healthcare reported the proportion of physicians who said they were employed by hospitals increased to 26 percent last year, up from 20 percent in 2012.

“The boundaries for antitrust enforcement have always been a bit vague,” he said. “This confuses the industry because for the longest time it thought integrating physicians was fundamentally a sound business strategy.”

Joe Lupica, a consultant with Newpoint Healthcare Advisors in Phoenix, said the Nampa ruling showed a hospital’s good intentions do not outweigh antitrust laws. He predicted that while hospitals will continue buying physician practices, they will also look for other ways to collaborate “before rolling the tanks in and using the blunt instrument of acquisition.”

FTC officials say they have sought to spell out guidance to health systems to avoid antitrust problems, but it’s not a simple matter.

“Antitrust enforcement is not a bright line, nor a number I can give you,” Feinstein said. “There are always deals on the margin.”

St. Luke’s went over the line not just because the court found the merger gave it control over 80 percent of the primary care physicians in the market but because the FTC investigation uncovered internal documents indicating the hospital system might use the acquisition to charge higher rates to insurers. Idaho’s largest insurer, Blue Cross of Idaho, also testified it feared St. Luke’s would force it to pay more for care.

‘I Want To Transform Health Care’

St. Luke’s officials denied they had plans to raise prices after the merger. Instead, they said they wanted to pursue a strategy in which the health system — not insurers —took the financial risk of coordinating patients’ care and was rewarded for keeping them healthy and out of the hospital. They said that having salaried doctors would make it easier to share electronic health records, stream patient referrals and adopt treatment protocols.

St. Luke’s had already become one of dozens of hospitals nationwide that have formed Medicare accountable care organizations under the health law, agreeing to coordinate care with the prospect of qualifying for government bonuses if they hit cost and quality targets.

“I want to transform health care, and we have taken concrete steps to do it. But we can’t do this alone,” said St. Luke’s CEO David Pate, a physician, who has sought to delay the dissolution until after the hospital’s appeal is heard.

He said the community has benefited from the merger because Saltzer doctors now treat more Medicare and Medicaid patients as part of a larger hospital system. 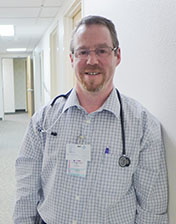 Dr. Tom Patterson, a physician at Saltzer Medical Group in Idaho, believes that selling to St. Luke’s was the right move (Photo by Phil Galewitz/KHN)

Some Saltzer patients with uncontrolled diabetes have also gained from a new program paid for by St. Luke’s which allows them to meet weekly with a diabetes educator. When Saltzer was independent, doctors said they had no financial incentive —or money — to offer such a program.

Dr. Tom Patterson, a Saltzer pediatrician, said that despite anxiety about his practice’s future as a result of the legal battle, he still believes that selling to St. Luke’s was the right move. He said he always envisioned working more closely with St. Luke’s because it runs the region’s only children’s hospital. And he thought the merger would help his patients get easier referrals to specialists and better care at area hospitals because they would share the same electronic record system.

“We were just trying to do what we saw as the trend in the nation, to more integrated care,” he said. “Higher insurance premiums were not the intention of the merger – our intention was decreasing costs.”

But executives at rival Saint Alphonsus — a subsidiary of Trinity Health, an 86-hospital Catholic health system —were not convinced. Saint Alphonsus, which put in a bid to buy Saltzer after it was asked by the medical group, sued to overturn the Saltzer-St. Luke’s merger.

CEO Sally Jeffcoat said Saltzer is “our lifeblood” because referrals from its doctors had accounted for nearly half of the admissions to its Nampa hospital. 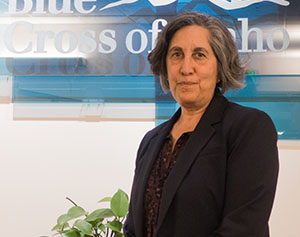 Zelda Geyer-Sylvia, president and chief executive of Blue Cross of Idaho, ­does not buy the argument that a larger St. Luke’s would be better able to control costs (Photo by Phil Galewitz/KHN)

“We had to preserve competition,” Jeffcoat said, explaining why her hospital sued to stop the merger. “It would have devastated this hospital.”

Jeffcoat notes that referrals from Saltzer doctors have fallen by 25 percent in the past year even though its Nampa hospital is 50 feet from Saltzer’s door.

Besides Saint Alphonsus, no one stood to lose more from the merger than Blue Cross of Idaho, the state’s largest insurer. CEO Zelda Geyer-Sylvia doesn’t buy Pate’s argument that a larger St. Luke’s would be better able to control costs.

“Consolidation has not been an effective way of reducing costs or providing more effective care,” she said. “People here have all the best intentions, but once you eliminate competition it’s gone.”

Is Bigger Better? Idaho Hospital Battle A Microcosm Of Debate Over Industry Consolidation