CASTAÑER, Puerto Rico — Helicopters from the power company buzz across the skies of this picturesque valley, ferrying electrical poles on long wires to workers standing on steep hillsides.

The people of Castañer, an isolated village in Puerto Rico’s central mountains, watch warily. Crews have come and gone, and people living along the mountain roads don’t expect to get power until late summer, if ever. Power finally started flowing to the center of town last month, but the electrical grid remains unstable — an island-wide blackout Wednesday disrupted progress — and the hospital continues to use its own generator.

More than six months after Hurricane Maria, daily life in Castañer is nowhere close to normal. Children attend school half the day; another nearby school is closed for at least two years, and families who lost their homes have set up beds and couches in its classrooms.

The deadly storm made landfall on the island’s southeastern coast on Sept. 20 and stayed over the island for nearly eight hours with sustained winds of 155 mph. Across Puerto Rico, it killed as many as a thousand people, wiped away homes and farms and crippled the electrical grid. 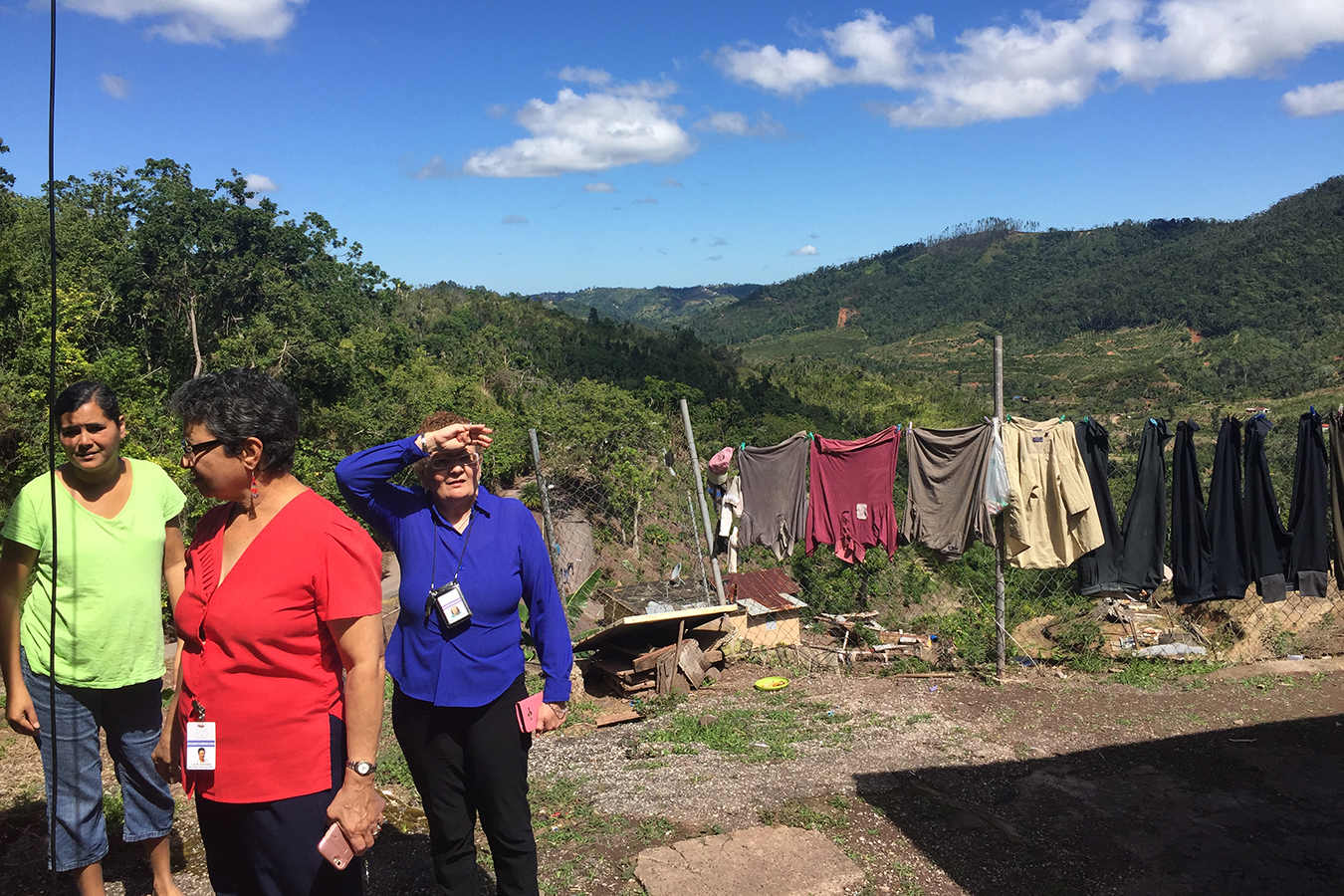 The federal government has committed about $18 billion to rebuild Puerto Rico, and in towns like this the task looks immense.

With no harvest this spring, idle men now spend hours on the plaza or in the town bar.

From his office at Castañer General Hospital, Domingo Monroig, the chief executive, looks out onto that bar on Castañer’s main street. In the months since the storm, the hospital has been the town’s organizing center.

“I don’t know if the phrase is unhappy, but we call it como triste in Spanish, because it is not the same,” said Monroig.

“For example, when they have light they are playing la cancha [in] the basketball area or they are in the plaza. But if we don’t have light, everybody stays in their home and they say, ‘I don’t know what to do. It’s every day, every day, the same, the same.’”

Many residents here continue to experience acute stress and anxiety attacks, said Dr. Javier Portalatin, a clinical psychologist and director general for mental health at the hospital. “Hurricane Georges was in the nighttime, and we only heard the sounds of it,” he said, referring to a devastating 1998 storm that hit the island. “This hurricane, we saw in the daytime in this region. We could actually see what was happening through the windows. I have patients who saw their pets being killed and their neighbors’ houses destroyed right next to them. These memories spur their anxiety attacks.”

Up a winding mountain road, one of Portalatin’s patients, Johanna Garcia Mercado, lives in near constant fear. Just 10 feet in front of her tiny, dark home, the hillside collapsed during the hurricane. Since then, she feels panic rising in her chest and often cries uncontrollably.

“When it rains and thunders,” said Mercado, “I’m afraid the steep hillside behind the house will collapse and bury my daughters in mud.”

The 37-year-old mother lifts up her T-shirt to reveal fresh scars from surgery on her pancreas, caused from the prolonged stress, said her social worker.

Mercado said she has thought of moving, but this piece of land is all the family owns. Her husband worked on the coffee farm across the road, but with no harvest this year, he is digging up yautia roots, which are similar to turnips, and selling them in San Sebastián, an hour away. 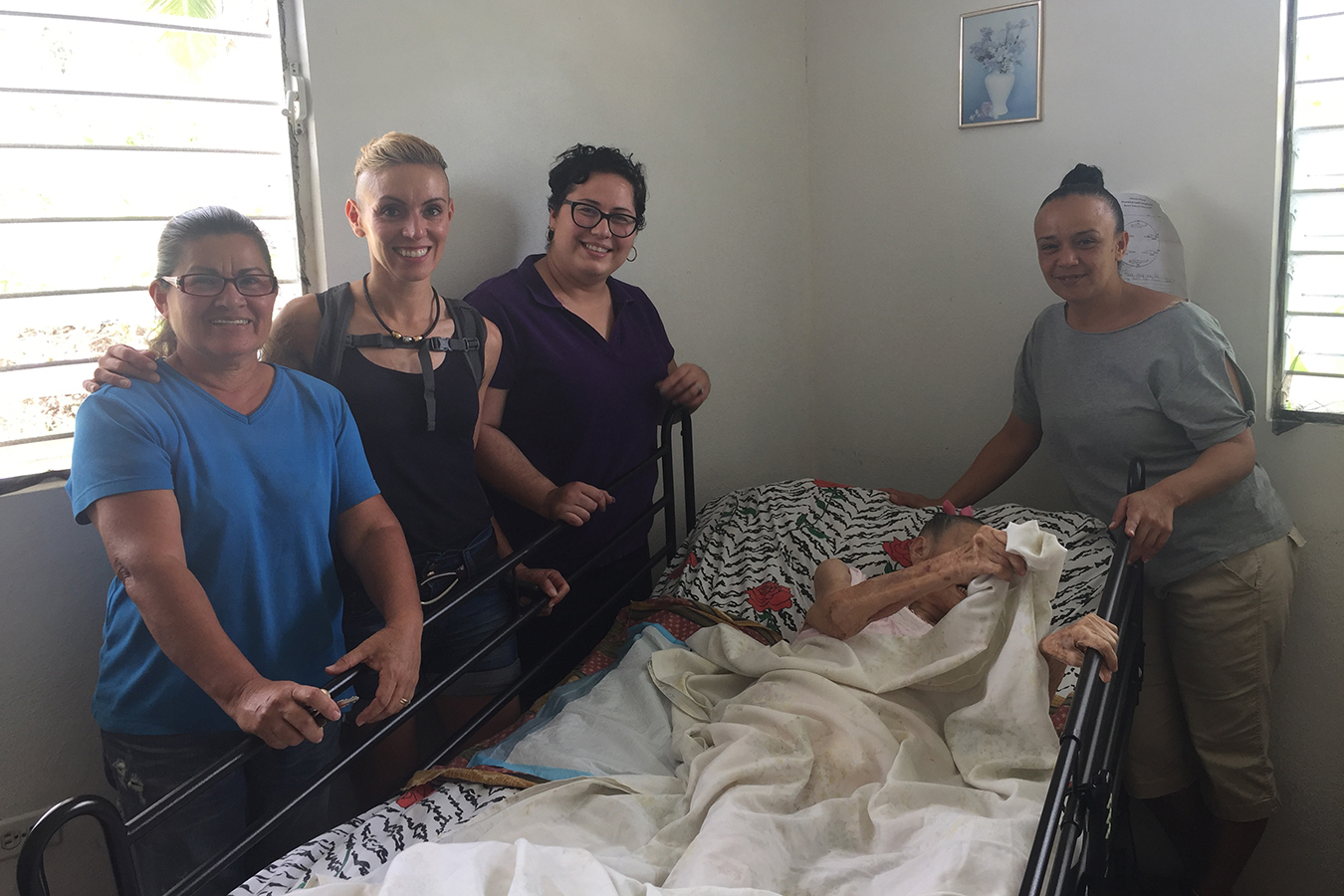 The villagers of Castañer are not standing still — they are working hard to recover.

But their resilience is withering, even for people like Mariela Miranda, a devoted do-gooder who has taken it upon herself to bring food and water to her bedridden neighbors. She delivers hot rice and turkey stew to a family that is caring for a 59-year-old man in the final throes of cancer.

They rely on a small inverter to power the ventilator keeping him alive. They have a generator, too, but today it isn’t working.

“It’s been really hard, because they need a generator because his machine has to be on 24 hours for the oxygen,” said Miranda.

Miranda gets back in the car and heads to her next stop.

She is a walking catalog of Hurricane Maria’s relentless torment: the neighbor sucking for air because he couldn’t plug in his nebulizer; the diabetics who can’t refrigerate their insulin.

She even helps a 109-year-old bedridden woman with Alzheimer’s who had terrible bedsores after lying for four months on a medical air mattress — not inflated, because her home had no power.

Even after the power comes back on, Miranda said, her elderly and bedridden neighbors will never fully recover. “If the light comes back, they will still have the mental damage, like they were like abandoned,” she said.

“This gets to you,” she continued. “It drains you. You get so frustrated sometimes. Because there are people that will die.” She recalls an elderly man she used to visit who died a month ago. “He died because he had [sleep] apnea and he didn’t have the power. So every night he would sleep at the macasina, in the driveway. He would sleep in the driveway sitting on the couch because he was scared to die if he fell asleep.”

When asked who should lead the effort to restore daily life to Castañer, Miranda grew exasperated. “We hear the help is getting here,” she said, “but those of us who visit the houses? We don’t see it.”

At the Mission La Santa Cruz church, the Rev. Edwin Orlando Velez Castro was preparing for Friday night services. Most of the townspeople, he said, were baptized here.

Standing in the darkened chapel — there is no power here either — he said that singing is like a prayer to God to change life and make it new.

“Most of the hymns we sing in this time give people faith that God will help us rebuild ourselves and our town,” he said. “That is part of our mission — to be light in this darkness.”