Two thin tubes that connect the ovaries to the uterus have assumed an outsize role in the battle against ovarian cancer.

Research increasingly points to the likelihood that some of the most aggressive ovarian cancers originate in the fallopian tubes. Most doctors now believe there is little to lose by removing the tubes of women who are done bearing children — and potentially much to gain in terms of cancer prevention.

The stakes in this research are high. Ovarian cancer is the deadliest of gynecologic cancers, killing 14,000 women a year in the United States. It is often diagnosed in the late stages, when it is more difficult to treat.

Routine screening tests to identify it early largely have been discredited. Earlier this fall, the U.S. Food and Drug Administration released a statement recommending against their use. For that reason, prevention is particularly important.

“It’s a really interesting topic and it’s practice-changing,” said Dr. Noelle Cloven, a gynecologic oncologist with Texas Oncology in Fort Worth. “Any opportunity to decrease the risk of ovarian cancer or improve our understanding of ovarian cancer, I’m in support of that. It’s a terrible disease.”

The risks associated with the removal of the fallopian tubes — known as salpingectomy — appear to be minimal, according to a study by Kaiser Permanente Northern California, which was published this summer in the journal Obstetrics & Gynecology. (Kaiser Health News is not affiliated with Kaiser Permanente.)

Between June 2013 and May 2014, nearly 73 percent of the women in the study had their fallopian tubes removed while undergoing a routine hysterectomy. Just two years earlier, fewer than 15 percent of a comparable group had. The large increase yielded no difference in surgical outcomes. And operating times and blood loss were slightly improved for patients whose fallopian tubes were removed.

Dr. Bethan Powell, senior author of the study and a gynecologic oncology surgeon with Kaiser Permanente, said the fallopian tubes until recently have been “a neglected region.” As a result, when women were undergoing hysterectomy — the removal of the uterus and cervix — the tubes were often left behind.

In recent years, two medical societies have issued statements about the importance of removing the fallopian tubes. In 2013, the Society of Gynecologic Oncology developed a clinical practice statement recommending the removal of both fallopian tubes as “a viable approach to prevent ovarian cancer.”

In 2015, the American College of Obstetricians and Gynecologists recommended that surgeons discuss the potential cancer prevention benefits of the procedure with their patients.

While it’s now recommended that patients have their tubes removed during a routine hysterectomy, doctors are still wrestling with more complicated scenarios.

Jennifer Klute, 35, a speech-language pathologist in Napa, Calif., was diagnosed breast cancer in 2015. She’d first noticed a lump while breastfeeding her daughter, Genevieve, and doctors initially reassured her that the lump was probably related to that. 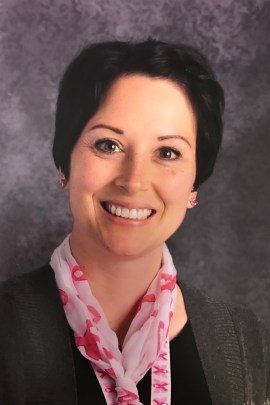 Jennifer Klute recieved a salpingectomy shortly after the birth of her daughter Genevieve. (Courtesy of Jennifer Klute)

Then the lumps multiplied. Biopsies were ordered. Klute received the dreaded phone call, and cut short a family vacation to Nebraska.

It’s recommended that women with the mutation have their fallopian tubes and ovaries removed between the ages of 35 and 40, as Angelina Jolie did in 2015.  Jolie earlier had a preventive double mastectomy.

Removal of the ovaries has significant cancer prevention benefits—both for ovarian and breast cancer. But it also carries real consequences, particularly for younger women like Klute. The ovaries regulate hormones and their removal plunges women into early menopause and increases their risk of osteoporosis, cardiovascular disease and dementia.

Klute had chemotherapy, radiation and a double mastectomy. Once she recovered, her doctor recommended she have her fallopian tubes and ovaries removed. Klute requested a second opinion and ended up meeting with Powell. Klute told Powell that while she had a family history of breast cancer, she didn’t have one of ovarian cancer.

Klute wondered whether she might delay the removal of her ovaries for a few more years. She didn’t plan to have more children, but she knew keeping her ovaries a little longer could reduce her risk of other health problems.

Powell knew that leaving the ovaries in high-risk women is “not recommended and not standard” at this point. But she was willing to discuss the idea with Klute, who eventually opted to keep her ovaries for a little longer. She knows they’ll eventually need to go.

Not all doctors feel comfortable offering such a choice to their high-risk patients. Dr. Jill Whyte, a gynecologic oncologist at Northwell Health on Long Island, is waiting for more data before she’s willing to recommend it.

Cloven, the gynecologic oncologist  in Texas, also said she would be nervous taking that approach unless the patient was “really motivated” and understood the risks of delays. Even then, Cloven said she would prefer that a patient choose that option only if participating in a clinical trial.

Nevertheless, Lisa Schlager, vice president of community affairs and public policy for Facing Our Risk of Cancer Empowered, a non-profit advocacy group devoted to hereditary ovarian and breast cancers, said she thinks more doctors are recommending the approach as an interim step for high-risk women in their 30s.

“If you want to have children and don’t want to be plunged into surgical menopause, the options are: do nothing, do imperfect screening, or in-between,” she said. “That in-between is salpingectomy.”

In Klute’s case, she said the salpingectomy itself was easy: Powell made a small laparoscopic incision to remove the tubes. Klute had a little nausea after she woke and couldn’t lift Genevieve for a few weeks. But the pain was manageable.

She’s now enrolled in two clinical studies and has submitted her information to the National Salpingectomy Registry.

“I think that’s super important,” Klute said. “The more knowledge we have, the more informed decisions we can make — and the greater the outcomes for individuals with cancer.”

In Battle Against Ovarian Cancer, A New Focus on Fallopian Tubes