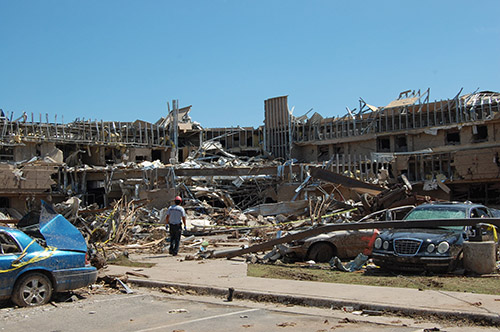 Everyone expects a hospital to be ready to jump into action when disaster strikes. But what about when the disaster devastates the hospital itself?

Turns out, it helps a lot to have an electronic medical record system in place.

At least that was the case at Moore Medical Center in Oklahoma, a small hospital right in the path of the tornado that ripped through the suburbs of Oklahoma City on Monday. Three-hundred people — staff, patients and community members — hunkered down in the cafeteria, stairwells and chapel as 200-miles-per-hour winds demolished the building around them.

One patient in labor stayed on the second floor with two nurses, where they could continue to monitor the fetal heartbeat.

Amazingly, everyone survived. Within an hour, 30 patients had been transferred to the two other hospitals that are part of the Norman Regional Health System. And every one of them arrived with their medical histories fully intact. The woman in labor even delivered a healthy baby later that evening.

“The transfer was totally seamless,” says John Meharg, director of health information technology at Norman, which has had an electronic health record system for the past five years. “We’re very fortunate that we’re a little ahead of the game,” he said.

If the hospital system had still been using paper, Norman explains, “the first thing we would have had to do was find their records. And with all of the hustle and bustle of a disaster, they can easily get lost.” As for any records left behind in files, he continues, “if the tornado doesn’t get them, the subsequent rain would ruin them. The roof’s gone, the walls are gone, and the windows are gone.”

Instead, physicians at the two transfer hospitals were able to pick up care for the Moore patients where their home physicians left off. Even if the patients had been taken to hospitals outside of the Norman system, their records would still have gone along with them. That’s because Oklahoma City has a regional health information exchange that allows the various hospital systems in the area to access all patient records, says Meharg.

“I’m very happy,” he adds, breathing a sigh of relief. “The systems never missed a beat. It would really have been a mess if we weren’t electronic.”

In Case Of Tornado, EHRs Can Be Just The Prescription