Once again, the Supreme Court will decide whether the Affordable Care Act lives or dies.

Defying expectations, the court announced Friday it has agreed to hear – during this term –  a case that challenges the heart of the law: subsidies to help people pay their insurance premiums. In about three dozen states, the federal government runs the online marketplaces where individuals can find health plans.

At issue is a phrase in the law stipulating that subsidies to help those with incomes under 400 percent of poverty are available only in “exchanges established by a state.” The authors of the law argue that the rest of the statute makes it clear that subsidies are available not only in state-run exchanges, but in those where the federal government is doing the work of the state.

When the law was written, most people expected that states would want to run their own exchanges. It was a surprise when most opted to let the federal government do it instead.

A decision to strike down the subsidies in federally-run exchange states could end up making insurance unaffordable for millions of people and threaten the viability of the law’s entire health insurance program.

In a rare Friday afternoon notice following their closed-door conference, the justices noted with no further comment that they have agreed to hear King v. Burwell. That is the case in which a three-judge Appeals Court panel in Richmond ruled unanimously that Congress did intend to allow subsidies to be available nationwide. 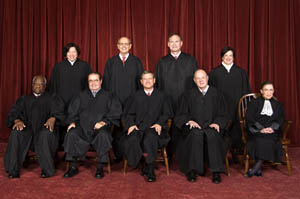 The Supreme Court will again rule on a key part of the Affordable Care Act.

That same day, a panel  in the District of Columbia Court of Appeals ruled 2-1 the opposite way. But that case, Halbig v. Burwell, was vacated when the full court agreed to rehear the case. That is scheduled for December.  Because there are not yet contradictory decisions by appeals courts, most observers thought the Supreme Court would at least wait until the lower courts were finished considering the case before weighing in.

“We are disappointed that at least four Justices decided to hear this case despite the lack of a circuit split and while this issue is still being actively litigated in the lower courts,” said Doug Kendall of the Constitutional Accountability Center, which is representing the members of Congress who wrote the law. “But we remain very confident that the Court will ultimately find that both the text of the ACA and the intentions of Congress mandate a ruling for the federal government.”

Those who argue that the federal subsidies are illegal, however, say time is of the essence.

“In King there is a serious argument that it would be better to resolve the underlying question of statutory interpretation sooner rather than later,” wrote Jonathan Adler, a law professor at Case Western Reserve University, in The Washington Post last week. “The resolution of this litigation will alter the calculus for many political and private actors considering how to respond to the PPACA, and the statute contains various deadlines and timeframes that may become harder to navigate the longer this litigation drags on.”

The White House said in a statement that the lawsuits challenging the language would not stand in the way of the law’s implementation. “This lawsuit reflects just another partisan attempt to undermine the Affordable Care Act and to strip millions of American families of tax credits that Congress intended for them to have,” the White House statement said.

This story was updated Nov. 10 to add the full name of Case Western Reserve University.