To understand why teen pregnancy rates are so high in Texas, meet Jessica Chester. When Chester was in high school in Garland, Texas, she decided to attend the University of Texas-Dallas. She wanted to become a doctor.

“I was top of the class,” she said. “I had a GPA of 4.5, a full-tuition scholarship to UTD. I was not the stereotypical girl someone would look at and say, ‘Oh she’s going to get pregnant and drop out of school.'”

But right before her senior year of high school, Chester, then 17, missed her period. She bought a pregnancy test and told her mom to wait outside the bathroom door.

“I saw both lines came up,” Chester said. “I had tears and I remember just opening the door and she was standing there with her arms out and she just wrapped me up and hugged me. I just cried and she told me it’s going to be OK.”

Chester’s mother had also been a teen mom, and so had her grandmother.

In Texas each year, about 35,000 young women get pregnant before they turn 20. Traditionally, the two variables most commonly associated with high teen birth rates are education and poverty, but a new study, co-authored by Dr. Julie DeCesare, shows that there’s more at play.

“We controlled for poverty as a variable, and we found these 10 centers where their teen birth rates were much higher than would be predicted,” she said.

DeCesare, whose research appears in the June issue of the journal Obstetrics & Gynecology, said several of those clusters were in Texas. The Dallas and San Antonio areas, for example, had teen pregnancy rates 50 percent and 40 percent above the national average.

“What we see is there are not supports in place,” Daverth said. “We’re not connecting high-risk youth with contraception services. And we’re not supporting youth in making decisions to be abstinent. We’re just saying that is an approach we want to take as a state — whereas other states have put in more progressive policies.”

Daverth said California invested in comprehensive sex education and access to contraception. There, the teenage birth rate dropped by 74 percent from 1991 to 2015. The teen birth rate in Texas also fell, but only by 56 percent.

In South Carolina, young women on Medicaid who have babies are offered the opportunity to get a long-acting form of birth control right after they give birth. They’re also trying that approach in parts of North Carolina. And Colorado subsidizes the cost of long-acting birth control. There, both abortions and teen birth rates are dropping faster than the national average.

Texas makes it hard for teenagers to get reproductive health care, Daverth says.

In Texas, if a 17-year-old mom wants prescription birth control, in most cases she needs her parents’ permission. “Only [Texas] and Utah have a law that if you’re already a parent, you are the legal medical guardian of your baby, but you cannot make your own medical decisions without the now-grandma involved,” Daverth said.

That’s part of the reason, she notes, Texas has the highest rate of repeat teen pregnancies in the country.

After Skylar was born, Chester wasn’t given contraception counseling and still wasn’t sure where to go for help. Three months later, she was pregnant again. She and her then-boyfriend, now-husband, Marcus Chester, hadn’t realized she could get pregnant so soon after having a baby. She was a full-time student at UT-Dallas at that point, double-majoring in molecular biology and business administration. But the education Chester never got, she said, was sex ed.

“In hindsight,” she said, “it’s like, ‘Dude, what were you all thinking? I came in 17, pregnant, why weren’t you all lining up the chart and showing me [my] options?'”

Chester’s high school, like the majority of schools in Texas, teaches abstinence-only or doesn’t offer any sex education at all, though more districts do seem to be adopting “abstinence plus” — which still encourages abstinence but also includes information on other pregnancy prevention methods and sexually transmitted diseases. 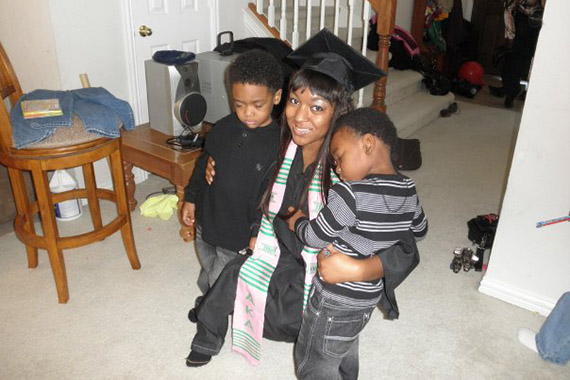 Jessica Chester, then 23, poses with sons Ivory (right) and Skylar (left) on the morning of her graduation from the University of Texas-Dallas. (Courtesy of Jessica Chester)

Still, abstinence-only education is king and, of course, some parents aren’t comfortable discussing sex with teens, much like Chester’s mother wasn’t.

“There are so many places like crisis pregnancy centers that are able to help these girls that are in need,” Hudgens said.

Studies show access to contraception is key to reducing the teen pregnancy rate. And according to the National Campaign to Prevent Teen and Unplanned Pregnancy, teen pregnancies in Texas cost the state $1.1 billion each year. Gwen Daverth said the costs are due to lost wages and an increased reliance on social services.

“One of the things we know is that 60 percent of teen parents will not graduate from high school, and only 2 percent will go on to graduate from college,” Daverth said.

Jessica Chester did graduate from college. Her mom helped her through it and she did end up taking out loans for day care, but she got a degree and now has a job doing community outreach and family planning for a Dallas hospital.

“I have a lot of support with my mother alone,” Chester said. “I had the example in front of me of [getting pregnant young] doesn’t have to derail your plans, it doesn’t have to stop you from getting an education and a career.”

Jessica and Marcus Chester married in 2010 and have a third son — Kameron, now 21 months old. That pregnancy was planned, she said.

Sitting on the couch at her home in Garland, Chester admitted it can be tough watching friends graduate with medical degrees who are further along in their careers. She has a good job, but it’s not what she was imagining when she graduated at the top of her high school class. Sometimes, she admits, it feels as if she failed.

“Like I gave up on my goals and dreams or messed them up. But when I look at my children, I don’t regret a thing. I’m not sad,” she said, even though her tears were flowing. “It’s just the reality of knowing my life is completely altered because of decisions I made as a teenager.”

Then Chester heard her older boys laughing upstairs, wiped her tears and went to cheer them on.

That story was part of our reporting partnership with NPR, KERA and Kaiser Health News.

In Texas, Abstinence-Only Programs May Contribute To Teen Pregnancies