I’d like to start a long-term relationship with a health plan, but all I’ve had are flings — seven insurers in the last 13 years. Is it something I said? Nope, it’s something I am: a self-employed, 45-year-old single guy with a heart that beats funny. 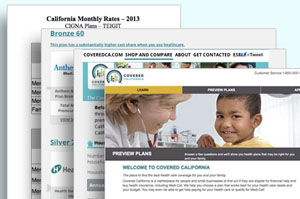 One of freelance writer Randy Dotinga options for insurance this year was a $3,028-a-month guaranteed-coverage Point of Service plan from Cigna.

Take Cigna. We seemed to click until the company wanted me to pay $11,000 a year in premiums. Another insurer came calling but turned out to be a scam, defrauding me and thousands of others. The high-risk plan in California — my home state — took me on, but I had to cough up $700-plus a month for paltry coverage.

Another couple of government-run plans were supposed to get me through this year with cheaper rates, but a bureaucratic snafu snuffed my coverage.

At least my misery has company. People with pre-existing medical conditions “face every kind of possible hassle,” said Nancy Metcalf, a senior program editor with Consumer Reports. Many can’t find coverage at all.

Now 2014 is fast approaching, and I suddenly have suitors. Six companies are offering me 34 plan options through my state’s marketplace, which was created under the federal health law. Insurance coverage, at last, is guaranteed. And, for now, so is confusion.

It’s A Long Story Involving A Scam, An $11,000 Annual Premium And Relief (Kinda)

My endless insurance drama began in 2001, when my COBRA coverage expired from my previous newspaper job. I needed to find new coverage on the individual market as a self-employed freelance writer who didn’t have access to a guaranteed group health plan. But insurer after insurer rejected me because I had a pre-existing condition: an irregular heartbeat I’d developed in my 20s.

The condition, known as atrial fibrillation, slightly raises my risk of stroke. It also requires occasional cardiologist checkups and costs about $260 in medication each year. That was enough to make me one of the millions of people on the individual market who can’t get coverage because insurers don’t want to risk paying extra for their health problems. (I like to imagine that insurance companies ran screaming into the night when they received my applications).

I needed to find the individual insurance market’s Holy Grail — an insurer who’d take all comers, pre-existing condition or no. I discovered it through a writers’ group that sold an Aetna insurance policy, no health questions asked. But then Aetna spiked its rates, and the group found replacement insurance through a company called Employers Mutual. This did not go well.

The company turned out to be unlicensed and a scam, leaving me and 29,000 other policyholders in the lurch. Employers Mutual reportedly left tens of millions of dollars in medical claims unpaid.

Coverage through Cigna came next via a firm that provides coverage to members of associations representing artists, performers and writers. But in 2006, when I was 38, I faced a prohibitive increase in my monthly premium from $509 to $928. (The Cigna rates are even worse now. My annual premium for 2013 if I bought a Cigna point-of-service plan through the same company: $3,028 a month, or $36,336 for the year, plus a $24 service fee.)

A lack of options forced me to enroll in California’s high-risk pool, and it cost me big-time. My monthly premium grew over time and by 2008 it was more than $700 a month for coverage with an annual benefit limit of $75,000 and a lifetime limit of $750,000.

As Metcalf of Consumer Reports puts it, that level of coverage is “terrible.” Indeed, a serious car accident or bout with cancer could wipe that out quickly. I worried that an expensive medical catastrophe would mean bankruptcy for me.

Left In The Lurch Once Again

Fast forward to the Affordable Care Act. For me, it is shaping up to be a blessing — sort of — in my case.

The health law set up a new state insurance plan for high-risk people – the California Pre-Existing Condition Insurance Plan – that offered me the opportunity to get fantastic benefits at less than half the cost of my existing coverage. But I had to go without any insurance for six months to qualify.

So I did, and I survived. But this plan, at an exceptional price of $265 a month, expired in June of this year, forcing me and residents of 16 other states into a six-month transition plan.

That brought more trouble. I’ve been paying the $287 monthly premiums for the transition plan, but a visit to the doctor’s office this month for a flu shot revealed that the feds cancelled my coverage back in August. The system seems to believe I’m eligible for Medicare. Actually, I have another 20 years. Now, I’m working through a bureaucratic maze of phone calls and emails to restore my coverage for the remainder of this year.

That’s just one spot of bother for me to resolve. There’s another: Now I need to wade through 34 insurance options from Covered California, the state’s online health insurance marketplace, which was created as a result of the health law,  and figure out which one to purchase for 2014.

Fortunately, I live in one of the 14 states that operate their own marketplaces and don’t rely on healthcare.gov, the trouble-prone federal website. Unfortunately, the Covered California website has had its own glitches, including a buggy doctor search feature and shutdowns of the enrollment section for repairs.

So far in my efforts to enroll, which began shortly after the Oct. 1 launch, I’ve faced numerous impediments — blackouts when the site was shut down for scheduled maintenance, a disappearing enrollment section and other technical hiccups, including broken links and HTML coding problems.

Still, I’ve found the website easy to use when it’s actually working. It says 34 plans are available to me ranging in price and particulars from $263 a month for “bronze” level coverage in an exclusive provider organization to $548 a month for a “platinum” level health maintenance organization.

The “metal” levels — bronze, silver, gold and platinum — refer to the level of coverage offered by a plan. They range from platinum plans that cover an average of 90 percent of health care costs to bronze plans, which have significantly cheaper premiums but cover only 60 percent of costs and have higher deductibles. (They pay for 100 percent of costs after a policyholder reaches a set out-of-pocket spending limit.)

The state standardized the four general types of coverage levels so they share the same deductibles and co-pays, said Anthony Wright, executive director of Health Access California, a non-profit advocacy group. “This is a huge benefit for consumers because it creates a situation where people can actually make apple-to-apple comparisons, and it removes the fear of the fine print.”

But I’ve still got to compare 34 different apples. And it’s not just Granny Smith versus Red Delicious, even with California’s user-friendly modifications.

There are many factors to consider just to choose the best metal level. Platinum plans cover a lot with no deductible and a low, $4,000 maximum out-of-pocket expense for an individual, but they’re mighty pricey and a bad deal if I don’t need much care. Bronze plans could save me thousands of dollars a year in premiums versus platinum plans, but they don’t cover much and have a higher out-of-pocket maximum — $6,350.

(My income is too high for me to be eligible for subsidies to reduce my premium or costs like co-pays. The Covered California website says I’d get an $11 a month subsidy if I made $45,000 in “Modified Adjusted Gross Income” a year or a whopping $207 monthly subsidy if I made $25,000.)

The Covered California website had a handy feature that asked me how much I typically spend on medical costs annually and then estimated how much I’d spend each year, per plan, on premiums and out-of-pocket costs. But that feature seems to have disappeared for the moment, along with the enrollment section.

Then there are the other factors: HMO, PPO or EPO? If I’d like an HMO, I could go with Kaiser Permanente, which insures 7 million Californians and is well-respected, but would require me to dump my current doctors. HealthNet has by far the cheapest gold-level HMO plan at $347 a month, a savings of $552 a year over the next cheapest one.

But the state website’s failure to provide a working database of the physicians covered by the various plans leaves me in the dark about whether HealthNet HMOs include the doctors I’ve seen for a decade or longer. And I know HealthNet has tried to lower costs to policyholders by sharply limiting the number of doctors who are covered by its plans. So has Blue Shield of California, which will make about half of its doctors off limits to those who buy coverage through the marketplace, the LA Times reported.

Soon, though, I should have coverage set up for 2014 that will be thousands of dollars cheaper a year than what it once was — although more than I’m paying now — and cover much more.

Who knows, maybe an insurer and I will finally start going steady.

Randy Dotinga is a freelance writer based in San Diego.

My Other Pre-Existing Condition: Unstable Insurance