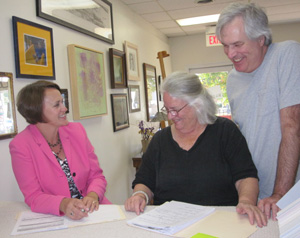 RICHMOND, Va.  Some experts would say Debbie Stocks ought to start looking for a new career, that the new health overhaul law makes insurance brokers like her obsolete.

But Stocks, 45, isn’t about to give up her calling. As the onetime high school French teacher says, “my soul loves health insurance.”

The law hits brokers on two fronts: first, it sets up online health insurance marketplaces called exchanges. Beginning in 2014, customers in the individual and small group markets will be able to compare and contrast health plans, which will be regulated by government, without the help of a broker.

Second, starting next year, insurers are required to spend at least 80 percent of their premium dollars on direct medical care. To save money, many are considering cutting or eliminating the commissions they pay brokers, which are considered an administrative expense. Some insurers have already started reducing broker fees.

The law also aims to simplify the marketplace for consumers by prohibiting insurers from charging women or people with preexisting conditions more, and by limiting how much premiums can vary based on age and region. These changes, along with the creation of new standard benefit packages, should make it easier for customers to select the best plan they can afford.

Going The Way Of Travel Agents?

Health care economists and many of the lawmakers who wrote the new health law pointed to administrative costs  including broker fees  as a factor driving health insurance costs.

To their clients, brokers may seem like a free service — insurers pay broker commissions directly, usually 6 to 8 percent of premiums the first year of the health plan and 4 percent to 6 percent in subsequent years. But the cost if those commissions gets passed to everyone who buys insurance. There are currently about 434,800 brokers in the U.S., according to the Bureau of Labor Statistics, and the majority sell health insurance.

“Of course they’re just middlemen,” says Paul Ginsburg, president of the nonprofit Center for Studying Health System Change. He compares them to travel agents in the pre-Internet era. “It used to be that you paid the same amount per ticket whether you bought directly from the airline or through a travel agent, and the airline gave the travel agent a commission.” But as the market grew more competitive, airlines began to wage price wars, and agents were one of the first cuts. The airlines set up websites, and third party sites such as Travelocity were launched. There still are travel agents, but they’re often boutique shops catering to customers willing to pay for the service.

Stocks argues that she offers her customers something that cannot be replicated by an online exchange. Many small businesses have complicated health needs that make buying insurance challenging, she says, including Rick’s Custom Frame + Gallery. 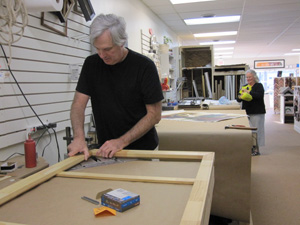 Rick Michaels suffers from painful degenerative arthritis, and he needs a hip replacement. But a pending health claim for the surgery would probably push up the rates for his small business’s health insurance, Stocks says. (Jenny Gold/KHN)

On a warm day this fall, Stocks visited the shop to discuss a few of the options she had in mind. The walls of the store were covered in sample frames of every color and texture, from simple woods to glossy fake porcelain in red and blue. When she walked in, co-owner Phyllis DeMaurizi gave her a warm hug as Rick Michaels, the store’s master framer and DeMaurizi’s partner, limped over to say hello.

Michaels, 54, was suffering from painful degenerative arthritis, and the cartilage in his hip had deteriorated almost completely, requiring a hip replacement. His insurance from his previous job was set to expire at the end of the year, possibly before he would be able to get surgery. Meanwhile, one of their employees was uninsured and needed coverage.

Stocks offered a few suggestions, cautioning that if the shop signed up for a health plan now, Michaels’ surgery would be a pending health claim that would probably push the rates up pretty significantly.” One option, she said, was to start the group plan without Michaels and wait until he had his surgery before adding him.

Buying insurance isn’t “like buying a pair of pants,” says Stocks. “You buy a pair of pants, you try them on, they don’t fit, you send them back. You buy an insurance plan, when you try it on, if it’s not right, it’s too late.” In addition, her firm, Your Benefits Partner, LLC, offers service throughout the year by helping clients address health claims and billing concerns.

Brokers hope to blunt the impact of the requirement that insurers spend at least 80 percent of premium dollars on medical care, which puts pressure on insurers to cut brokers’ commissions. Several states are planning to seek waivers from the requirement, and brokers hope their allies in Congress will try to change the law. Last week, the National Association of Insurance Commissioners said it had created a task force to work with the Obama administration to keep brokers in business.

Janet Trautwein, executive vice president and CEO of the National Association of Health Underwriters, the main brokers’ trade group, says that while she worries about their “ability to make a living” if insurers cut commissions, she’s optimistic that they will continue to be paid to sell insurance both inside and outside of the exchanges.

Trautwein points to the state of Utah, which created a health insurance exchange in 2009, as a possible model. The exchange pays brokers a flat fee of $37 per month for each individual they help enroll.

Lynn Quincy, a senior policy analyst at Consumers Union, publisher of Consumer Reports magazine, says that even after the health law takes effect, consumers will need help navigating their insurance options. The exchanges will make it easier to compare plans, she says, “but it will still be a pretty complex decision.”

She says brokers will fare particularly well beginning in 2014, when the number of insured Americans is expected to surge. Brokers who see their commissions cut may make up the difference in volume, says Quincy.

Preparing For The Worst

Buz Grossberg owns a popular barbecue joint in Richmond called Buz and Ned’s Real Barbecue and has been Stocks’ loyal customer for the past three years. Grossberg is a husky, effusive man, with white hair and a mischievous smile. His office is cluttered with piles of papers, binders and pig paraphernalia, and on one wall a sign that reads “nobody gets in to see the wizard. Not nobody. Not no how.”

Grossberg offers health insurance to the restaurant’s managers, and he says Stocks was able to bring his yearly costs down 40 percent in the first year by putting the business on a high-deductible plan. 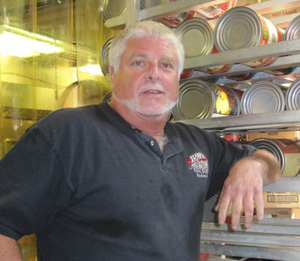 Buz Grossberg, who owns a popular barbeque joint in Richmond, offers health insurance to the restaurant’s managers. He says Debbie Stocks was able to bring his yearly costs down 40 percent in the first year by putting the business on a high-deductible plan. (Jenny Gold/KHN)

He says he considers Stocks to be part of his company’s human resources department, providing services which they could not otherwise afford. Stocks “goes to bat for us” by dealing with pending health claims and billing issues with the insurance company, something he doesn’t have time to do. “She knows where to go, who to talk to. She’s timely, she gets it done, and we get answers.”

Grossberg says he might be willing to pick up part of Stocks’ commissions if insurance companies cut back on them. But that would depend on what kind of deal she can get him. “I hope as a businessman that difference would be reflected in the price I’m charged in my policy,” he says, “and it would be a wash.”

With that kind of uncertainty in the market, some brokers say they’re already preparing for the worst. Stocks knows several who have already sold their businesses in anticipation of the health law’s effects.

She is confident that many of her clients would be willing to pay her commissions directly, but just in case, she’s buying a nearby property and casualty insurance company as a backup business.

Even if broker commissions are cut significantly and the exchanges become very popular, Stocks is hopeful there will still be a future in insurance. “Look, I started as a French teacher and I sell health insurance,” she says. “I’ll find that opportunity, and I’ll go there.”

As for the frame shop, Stocks has found them a new group plan that will begin in January and put their one uninsured employee on an individual plan until then. Meanwhile, Michaels found a surgeon to do a hip replacement before his current policy runs out.