Partly blaming the health law, United Parcel Service is set to remove thousands of spouses from its medical plan because they are eligible for coverage elsewhere.

Many analysts downplay the Affordable Care Act’s effect on companies such as UPS, noting that the move is part of a long-term trend of shrinking corporate medical benefits. But the shipping giant repeatedly cites the act to explain the decision, adding fuel to the debate over whether the law erodes traditional employer coverage. 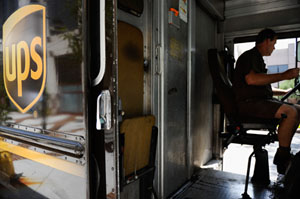 Rising medical costs, “combined with the costs associated with the Affordable Care Act, have made it increasingly difficult to continue providing the same level of health care benefits to our employees at an affordable cost,” UPS said in a memo to employees.

The company told white-collar workers two months ago that 15,000 working spouses eligible for coverage at their own employers would be excluded from the UPS plan in 2014. The Fortune 100 firm expects the move, which applies to non-union U.S. workers only, to save about $60 million a year, said company spokesman Andy McGowan.

UPS becomes one of the highest-profile employers yet to bar working spouses from the company plan. Many firms already require employees to pay a surcharge for working-spouse medical coverage, but some are taking the next step by declining to include them at all, consultants say.

“They are simply saying to the spouse outright, ‘If you have coverage somewhere else you are not eligible here,’” said Edward Fensholt, a senior vice president at Lockton Cos., a large insurance broker. “We don’t see a lot of that out there, but more than we used to.”

This year 4 percent of large employers surveyed by consultants Towers Watson excluded spouses if they had similar coverage where they work. Another 8 percent planned such a change for 2014, according to the survey.

“When health-care reform came on the scene a few years ago we definitely saw an uptick in companies wanting to explore a working-spouse provision,” said Steve Noury, national sales director for HMS Employer Solutions, which monitors dependents’ eligibility for corporate benefits. “We have seen [them] over the past two or three years putting those in place.”

The health law requires large employers to cover employees and dependent children but not spouses or domestic partners.

UPS spouses may have difficulty finding similar coverage at their own employers. The $500 in-network family deductible for UPS’s basic plan, for example, is less than the nationwide average of $733, according to the Kaiser Family Foundation. (Kaiser Health News is an editorially independent program of the foundation.)

Health coverage for spouses became standard in the 1950s when wives were less likely to work outside the home. The rise of two-income households led, in many cases, to two family health plans, but employers have been slow to address the overlap.

Companies have employed varying tactics to get spouses off their plans. The city of Anacortes, Wash., pays employees a bonus if spouses get coverage elsewhere, said human resources director Emily Schuh. This year Xerox went the opposite way, charging employees who enroll working spouses a $1,000 annual penalty, which rises to $1,500 next year.

Spouse and domestic partner coverage at Xerox “is intended primarily for those who do not have their own access to employer provided medical coverage,” said company spokesman Bill McKee.

One large employer in five collects a surcharge on covered spouses who are eligible for insurance at their own workplace, according to the Towers Watson survey. Another 13 percent planned to add such a working spouse penalty next year.

Now employers are mimicking the city of Richmond, Ind., which excluded working spouses from its health plan starting in January, mainly because too many employees were taking them up on their offer.

“We have all these [employers] around us who are not covering working spouses,” said Richmond human resources director Sue Roberson. “You almost have to do it out of self-defense.”

The new plan at UPS, which earned $807 million last year on revenue of $54.1 billion, affects about a quarter of its U.S. workforce. The company is sharing part of the savings with employees, reducing premiums for workers whose spouses leave the plan.

Neither the company nor the Teamsters union would say whether a pending contract for blue-collar workers includes health-coverage changes for working spouses.

To explain the switch, UPS gave workers a memo, obtained by KHN, that repeatedly mentions the health act.

While acknowledging that overall health spending continues to rise, the company also blamed cost increases on the Affordable Care Act’s research fee (initially $1 per health plan member, then rising to $2) and an a temporary fee of $63 per member to stabilize new online marketplaces for consumers buying directly from insurers.

Other factors are the act’s ban on annual and lifetime coverage limits and its requirement to cover dependent children up to age 26, UPS said. The law’s mandate for individuals to obtain coverage will nudge employees who previously opted out to enroll, also raising costs, the company said.

The health law is “one of the reasons that UPS is implementing the changes,” McGowan said.

Advocates of the law argue that its costs are minimal compared with the burden of overall medical-insurance inflation, which the ACA was designed in part to control.

“The notion that those are going to be make-or-break when they are otherwise absorbing 7 to 10 percent a year [in broader health-cost increases] is kind of ridiculous,” said Jonathan Gruber, an MIT economist who advised the Obama administration on health policy. “Nobody expected the ACA to have a major effect on health costs for large firms.”

The nonpartisan Congressional Budget Office projected in 2009 that the law’s effect on premiums for large employers would be negligible.

Consultants point to another health law effect, however, that could also give employers a reason to dump spouses. Excluding wives might help keep companies from paying the “Cadillac tax” on high-value plans that takes effect in 2018, analysts said.

Also, women in their childbearing years “are a cost driver,” said Julie Stone, a senior benefits consultant at Towers Watson. “If you have female spouses and you decide not to cover them, you’re going to bring costs down.”

The Obama administration would not respond directly to UPS’s statements but said that employer coverage increased when Massachusetts implemented its own version of the health overhaul.

“The health care law will make health insurance more affordable, strengthen small businesses and make it easier for employers to provide coverage to their workers,” said Joanne Peters, spokeswoman for the Department of Health and Human Services.

Stone doesn’t expect widespread exclusion of working spouses until the health act’s public insurance exchanges, scheduled to open in October, mature. Once companies know there’s an alternative for working spouses, they may accelerate the practice, she said.

But first “they’re going to talk about it for a few years,” she said.