Thanks to hefty profits and a requirement in the health law that takes effect this year, insurers will send subscribers hundreds of millions of dollars in rebate checks this August. 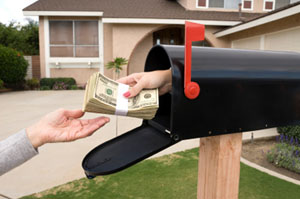 But the industry and the Obama administration are at odds over proposed language in the letter that goes with the checks as well as who gets notification. The administration may require insurers to send notices about rebate rules even to customers who aren’t getting a rebate.

America’s Health Insurance Plans, an industry lobby, called that “unnecessary and illogical.” It also objects to a proposed message for rebate recipients that mentions the health law in the second sentence, describing the language as “inflexible and highly prescriptive.”

“This letter is to inform you that you will receive a refund of a portion of your health insurance premiums,” the letter starts off. “This refund is required by the Affordable Care Act — the health reform law.”

Republicans say the proposal forces industry to pay for what amounts to Democratic campaign literature weeks before the election.

“The fact that many individuals receiving this advertisement won’t even be affected by this policy shows it to be merely propaganda,” Rep. Joe Pitts, R-Pa., said in an interview. Pitts is chairman of the health subcommittee on the House Energy and Commerce committee.

The 2010 health law requires insurers to make partial refunds to subscribers or employers if the companies don’t spend a certain portion of premiums — 80 to 85 percent in most cases — on medical care. The measure was intended to boost spending on treatment and reduce insurers’ administrative costs and profits.

Because of a moderation in 2011 health-care spending and outsize industry profits, analysts expect this year’s rebates to be substantial.

Up to 9 million Americans could get checks worth up to $1.4 billion, Steve Larsen, director of the Center for Consumer Information and Insurance Oversight at the Health and Human Services Department, told Congress on March 21. Rebates in the individual-policy market could average $164 apiece, he said.

The Department of Health and Human Services has received several comments on the proposed notices but hasn’t set the final language or determined whether those not getting rebates should get notices about insurers’ “medical loss ratio.” The MLR is the portion of premium revenue spent on health care and quality improvement.

Notifying recipients as well as non-recipients would take up to 100 million extra letters, according to AHIP. The added cost for the industry would be $200 million to $300 million, Daniel Durham, AHIP’s executive vice president for policy, said in a letter to HHS. The agency estimates the extra cost would be far less — $71 million.

“There is no requirement in the law that issuers not paying a rebate provide any notice,” said a comment letter from Cigna lawyer Edward P. Potanka.

Advocacy groups promoting the law’s benefits, on the other hand, argue that consumers should receive notices whether they’re getting a rebate or not to increase public awareness of how insurers use their resources.

“It is… critical that consumers have the information necessary to understand, evaluate and compare health plan MLRs,” Ethan Rome, executive director of Health Care for America Now, a pro-health law group, said in a comment letter.

In any case, Rome added, government should closely supervise the letters’ language. Otherwise, he said, insurers could take credit for the rebate largesse.

“The reason the industry doesn’t like it is they don’t get to claim it’s their idea,” he said through a spokeswoman. “They just want to put their name on it.”

“We realize that issuers will need time to comply with these rules before rebates are issued in August, and we’re working hard to provide this guidance quickly,” said an agency spokesman.