A few months into a new job as a contract engineer, Jim Arey was stunned by an $8,000 bill he received for two doctor-administered infusions of an expensive drug he needs regularly. That’s when the Columbia, Md., man learned that the insurance provided through his placement firm capped doctor office care at $2,000 a year. He unknowingly hit his cap on his first visit because of the cost of the drug.

For a while, Arey, 29, tried to do without the medication for ankylosing spondylitis, which causes inflammation of the joints between his vertebrae, but soon was not “able to move without screaming.” Treating side-effects that resulted from going without medication put Arey even further in debt.

The new health overhaul law aims to end all annual dollar limits on health insurance policies by 2014. Federal regulators contend such limits can leave policyholders “virtually uninsured” for the rest of the year once caps are hit. 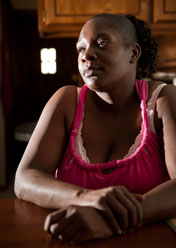 Rolanda Carter of Oklahoma City says she still owes several thousand dollars because of limits in the coverage she had from a former job. (Shane Bevel)

Starting this fall, most health care policies – except existing policies purchased by individuals on their own – will have to cover at least $750,000 in medical care per person. That amount ratchets up to $2 million by September 2012. But there’s a catch. Insurers can seek a waiver from the government to keep their current limited plans if they can prove that offering better benefits would cause significant premium increases or force employers to drop or severely limit coverage.

That raises a tricky issue for federal regulators trying to write the rules for waivers: How to protect workers from skimpy policies without causing them to lose insurance.

Insurers and employers say a generous waiver process is needed to avoid a sudden jump in premiums. But patient advocates, such as California-based Consumer Watchdog, warn against being too lenient. All sides are pressing their case with the Department of Health and Human Services (HHS), which is writing the rules on the waiver process but has not specified what they will say or when they will be in place. It is not clear yet whether the waivers could continue after 2014. HHS said details on the waiver process are under development and declined to elaborate.

The waiver has reignited a debate that wasn’t settled during the contentious health care battle: Should the government insist on comprehensive insurance, even if it costs so much that some employers drop coverage entirely?

Art Caplan, who follows the issue as director of the Center for Bioethics at the University of Pennsylvania, says lawmakers failed to clearly define what is adequate insurance. He says that limited-benefit coverage is better than nothing, “but not necessarily a whole lot better.”

Employers, meanwhile, are adamant: “Anything is better than nothing as long as the employees know what they’re getting,” says Ed Lenz, senior vice president and general counsel for the American Staffing Association, which represents 900 firms that provide temporary and contract staffing, outplacement and training services.

Like almost two million workers nationwide – many in the retail, service, restaurant or temporary staffing industries – Arey had a limited-benefit health plan. Such plans, while low cost, generally include dollar limits on coverage that can range from less than $100 a day to more than $250,000 a year.

While popular among small businesses, limited-benefit plans are also offered by large employers, including home improvement retailer Lowe’s, which offers part-time workers a plan that covers up to $50,000 a year in medical costs. The Regis chain of hair salons offers a limited-benefit plan as one of two options for new employees. It caps coverage at $15,000 a year and includes other limits, such as $240 a year for diagnostic X-rays or lab tests, $75 for one emergency room visit and hospital payments of $450 to $900 a day. Those payments likely would not cover the full cost of hospital care, which can be several thousand dollars a day.

Lowe’s and Regis, as well as other employers offering limited-benefit plans, would not comment on their health policies. Regis said the company is awaiting further guidance from HHS.

Government regulators, writing in the Federal Register, estimated that nearly 1.7 million people have plans with annual limits of less than $750,000 this year. Only about one of every 435 people with policies covering less than $250,000 in health-care expenses will exceed that amount, the regulators estimated.

But when they do, it can be a challenge.

Rolanda Carter of Oklahoma City says she still owes several thousand dollars because of limits in the coverage she had from a former job. The plan had an annual limit of $50,000, which seemed OK, says Carter, who works as a nursing assistant. But it included a limit of $3,000 in care from doctors. Because she has lupus and other medical conditions, Carter, 36, ran through her doctor limit after only three months. She now has a new job, but her insurance won’t begin for a few months. And she is still trying to pay off her medical debt.

“It’s getting to the point where I can’t go anywhere because I owe everyone,” she says.

Insurance For $15 A Week

The appeal of limited-benefit plans is that premiums are cheap, as low as $10 to $15 a week, for workers and the policies do provide some coverage toward routine medical care. The plans also are solid money-makers for insurers because of their fairly low payout for medical costs. Insurers offering the plans include big names, such as Cigna and Aetna, as well as smaller firms and companies that administer benefits for large, self-insured employers.

“The (insurance) industry loves them. And employers do too because it’s a low-cost way for them to provide benefits,” says benefits attorney Alden Bianchi, a partner at the law firm Mintz Levin in Boston. He says some insurers pay as little as 60 percent of revenue toward medical costs, which means they may also run afoul of another part of the health reform law: Rules requiring insurers to spend at least 80 percent of revenue on medical care.

Mark Bailey, a senior vice president at Cigna, says offering limited-benefit plans to employers has “been a high growth” product for the company during the past few years, particularly among firms with part-time workers.

He is optimistic that the waiver process will allow insurers to keep offering such policies to employers.

In a July 21 letter to HHS, Aetna said premiums could increase dramatically if limited-benefit plans are required to meet new restrictions on annual limits between now and 2014. Lower income workers would not be able to afford the higher costs, Aetna said. After 2014, the government will subsidize the cost of more comprehensive coverage for some low-income workers.

At present, “these (limited-benefit plans) meet a need for a very basic level of coverage that we recognize is not comprehensive,” says Aetna spokesman Mohit Ghose.

Most states allow insurers to sell such plans, but some have set additional rules. Connecticut, for example, requires the policies to note that they are “not designed to cover the costs of serious or chronic illness.” Washington state allows a “fixed payment” plan, under which insurers pay flat dollar amounts toward medical care, no matter how much the care actually costs, such as $25 for a doctor office visit or a few hundred a day for hospital care.

Beth Berendt, Washington’s deputy insurance commissioner, says she worries that consumers might not understand what they are buying. A policy might tout that it pays $300 a day for hospital care, for example, but “$300 a day might get you a gown and a bedpan, but not much else,” she says.

Michael Cannon of the libertarian Cato Institute, who opposed the health overhaul law, says workers should be free to choose limited-benefit plans: “For a lot of people, it’s not a bad decision,” says Cannon. Even if it is, he says, “People should have the freedom to make bad decisions.”

But others think HHS should include some restrictions in its waiver.

Judy Dugan of Consumer Watchdog says HHS should “draw a line between a limited-benefit policy that might actually help someone when they get ill and a policy that amounts to absolute junk.”

For his part, Arey says that his limited-benefit plan was worse than nothing at all, partly because having it meant he did not qualify for many medical assistance programs. He eventually got help from a drug industry-sponsored program to pay the majority of the cost of his medication.

Arey is still paying off his debts. But, he has a new job, with more comprehensive coverage.

“The limited-benefit plan caused a lot more hassle and stress than if I didn’t have the plan,” says Arey. “If I didn’t have one, I would have known what to expect.”

Health Insurance Debate: Is A Little Coverage Better Than None At All?