Though they continue to be overshadowed by less expensive, less effective birth control methods, long-acting reversible contraceptives such as intrauterine devices are gaining ground, according to an analysis of recently released federal data.

Nearly 12 percent of women who used contraceptives between 2011 and 2013 used IUDs or hormonal implants, according to a Guttmacher Institute analysis of data from the federal National Survey of Family Growth.

That made these long-acting products the third most popular form of reversible contraception, behind birth control pills (26 percent) and condoms (15 percent). 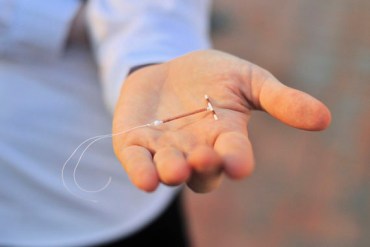 The use of long-acting forms of contraception has been increasing steadily, from 2.4 percent in 2002 to 8.5 percent in 2009, according to Guttmacher.

Long-acting contraceptives don’t require women to remember to use birth control every day or whenever they have sex. That makes them one of the most effective forms of contraception, preventing pregnancy in more than 99 percent of cases. IUDs last for up to 12 years, depending on the type, while hormonal implants protect against pregnancy for up to three years.

In addition, influential organizations such as the American Congress of Obstetricians and Gynecologists and the American Academy of Pediatrics have in recent years designated such  products as first-line choices for birth control.

Cost has always been one of the barriers. With a price tag for an IUD of several hundred dollars, many women opted instead for methods that didn’t require such high up-front spending, even though over time IUDs and implants may be less expensive than shorter term methods.

Cost should no longer be a barrier for most women. The health law requires that most health plans provide all FDA-approved contraceptives to women without requiring any out-of-pocket payments. The provision generally took effect in 2013, so the impact of the law’s requirements isn’t reflected to any large degree in the study’s figures, says Kavanaugh.

Over time, however, researchers expect the health law’s coverage requirements to boost the use of long-acting contraceptives, she says.