It all started at the mall when a friend offered her a puff from a Juul e-cigarette.

“It was kind of peer pressure,” said Beth, a Denver-area 15-year-old who started vaping in middle school. “Then I started inhaling it,” she said. “I suddenly was, like, wow, I really think that I need this — even though I don’t.”

Soon, Beth — who asked that her last name not be used because she hasn’t told her parents about her vaping — had a Juul of her own. She was vaping half a pod of e-liquid a day, the nicotine equivalent of half a pack of conventional cigarettes. She used other brands, too — a Suorin, a Smok Novo and a modified device, which gives users custom vaping options.

Beth tried to quit on her own, so her mom wouldn’t find out. But it was hard and her school didn’t have the resources to help her, she said.

“When you wake up in the morning, you’re just like, ‘Oh, I need to hit my thing. Where is it?’ You can’t really get it off your mind unless you distract yourself,” Beth said.

Colorado had the highest rate of teen vaping of 37 states surveyed in 2017, according to the Centers for Disease Control and Prevention. A quarter of those students said they currently used an electronic vapor product — double the national average. Beth guesses half of her classmates vape regularly. Her school does offer some tobacco-prevention education, but teens could use a lot more support to help them to quit, she said.

Beth said she managed to stop vaping a few weeks back, motivated by news stories of young people falling ill. And when her own friend got sick, that was a turning point.

Before, she said, “I didn’t really take it super seriously, because I was like, oh, what are the chances that that’s going to happen to me? And then my friend actually almost had his lung collapse, and he was coughing blood and mucus. And I just couldn’t do it anymore. It’s not worth it.”

Last week, the CDC reported it was investigating more than 1,600 lung injury cases nationwide associated with using e-cigarettes, including more than 30 deaths.

A federal survey shows more than a quarter of U.S. high school students have used an e-cigarette in the past 30 days. But public health advocates say that funding for anti-tobacco efforts is inadequate. Although states receive annual payments from tobacco companies as part of a 1998 lawsuit settlement, they’re not following CDC guidance on setting aside large chunks of that money to help smokers quit or prevent others from starting. States can spend that money on whatever they want, and most do. 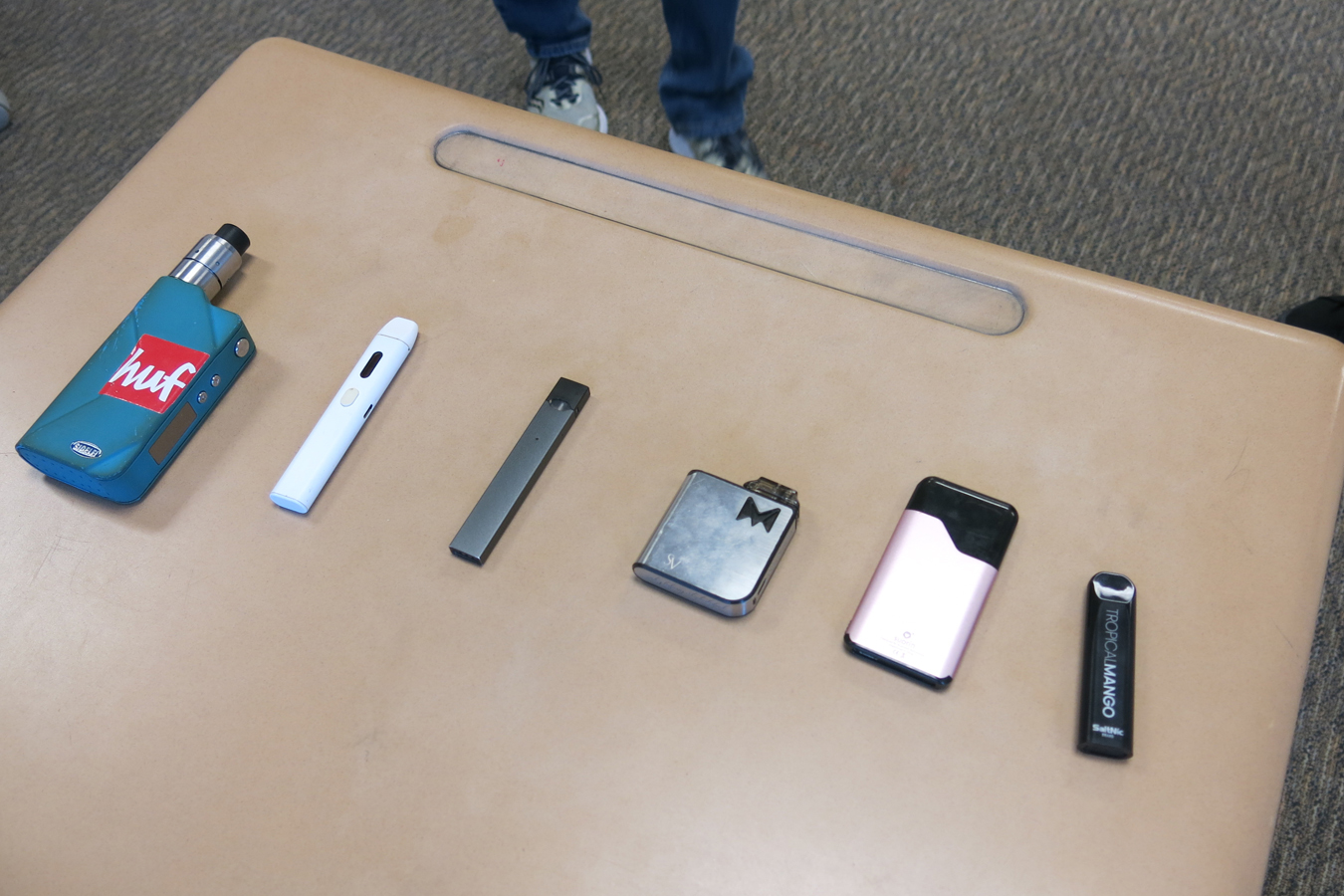 Another traditional funding source for antismoking programs has been cigarette taxes. But with fewer people smoking cigarettes, that revenue source has been less reliable. In Colorado, cigarette sales have declined by 41% since 1990, according to Colorado’s health department. And in more than half of the states, including Colorado, vapes aren’t taxed — at least not yet.

“It is daunting,” said Alison Reidmohr, tobacco communications specialist for Colorado’s Department of Health and Public Environment. “We’ve got more problems than we’ve seen before and fewer resources with which to deal with them.”

Colorado spends nearly $24 million a year on tobacco prevention, but according to a recent report from the Campaign for Tobacco Free-Kids, that’s less than half of what the CDC recommends, and a fifth of what the tobacco industry spends on marketing in the state.

“Really, we have almost nothing in terms of treatment for these kids,” said Dr. Christian Thurstone, who runs substance abuse programs for teens in Denver. He said teens have gotten addicted to nicotine so fast, it’s uncharted territory.

Though there are websites, hotlines, therapists and coaches to help kids manage nicotine cravings, those efforts were all designed around traditional cigarettes, Thurstone said. He has turned up no studies about adolescents quitting e-cigarettes.

A spokesman for the popular Juul brand said no young person or non-nicotine user should ever try Juul. But he didn’t say how minors who’ve started to use the product might quit.

Most teens just need to decide they’re not going to use anymore, said Gregory Conley of the American Vaping Association. “It’s only a small sliver that may actually need some assistance to get off the products,” Conley said.

Colorado’s health department disputes that; it estimates 10% of the state’s high schoolers are vaping nicotine more than 10 days a month.

In July, National Jewish Health in Denver launched a cessation program tailored to teens’ needs. In a large open office, coaches answer calls. “Thank you for calling My Life My Quit,” one said. “Congratulations on making the decision to quit.” The program — which uses a traditional help line, chats and live coaching — has seen a sharp surge in sign-ups in the past month. 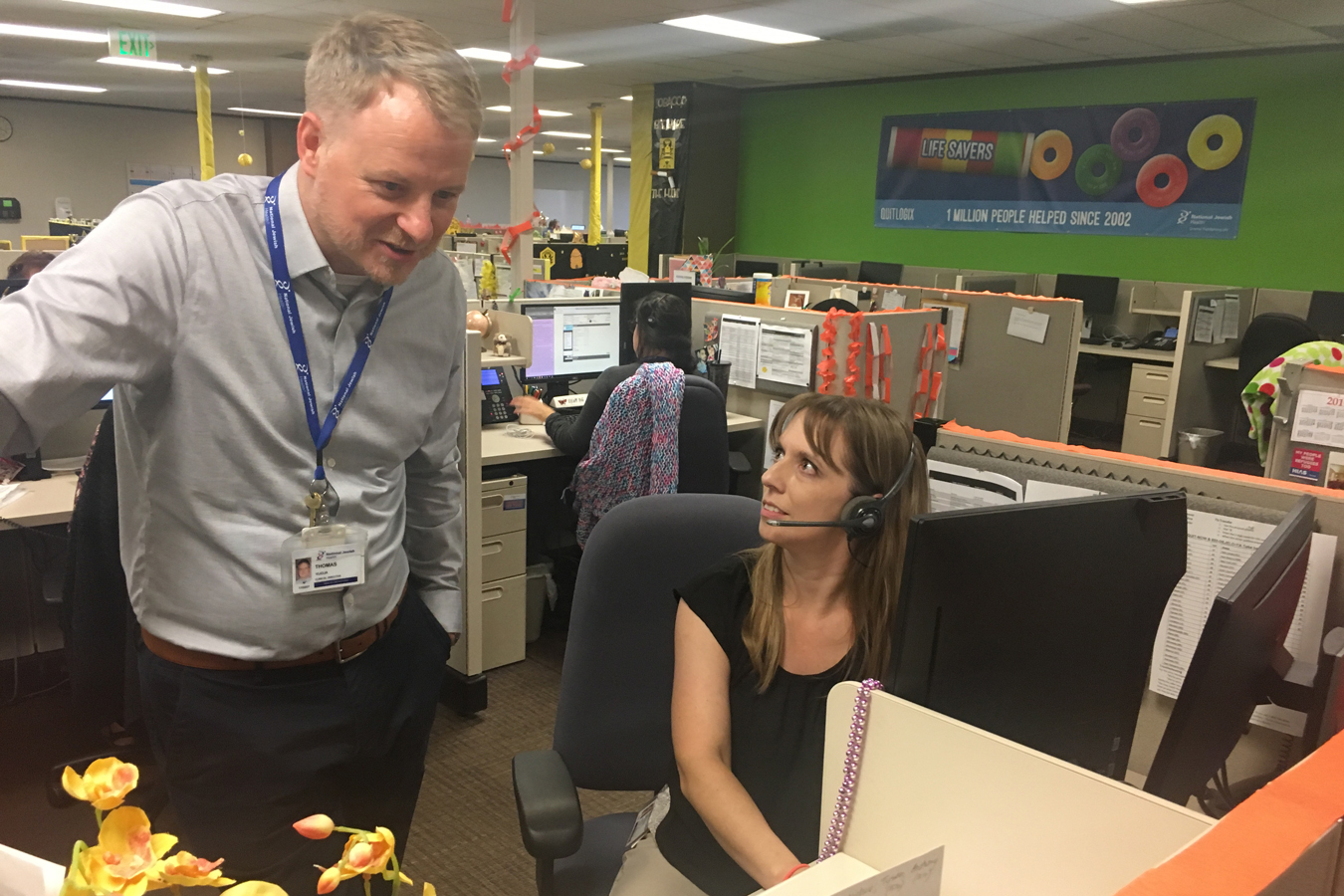 Thomas Ylioja, a clinic director with National Jewish Health in Denver., chats with Nichole Lopez, a tobacco cessation coach for a program there. In July, the hospital launched “My Life, My Quit” a vaping cessation program aimed at teens. The program has a traditional phone helpline, but also offers coaching by text and chat.(John Daley/Colorado Public Radio)

The program even added coaching by text, he said, because that’s how many teens like to communicate.

In his office, Ylioja reads from a printout of text conversations between teens and coaches. “‘I’m 16 years old. I’m super addicted to vaping. I can’t seem to quit when I don’t have it, that’s all I think about,'” one student writes.

“‘My family is worried and all the stories about people getting sick,'” said another text. “‘I don’t know if it’s really bad to vape, but because of these stories, they could be rare occasions, but I’m worried about it.'”

The Truth Initiative, a nonprofit public health group aimed at helping young smokers quit tobacco use, has expanded its resources to include a program focused on e-cigarettes. It’s a free text-messaging program “tailored by age group” to give teens and young adults appropriate recommendations about quitting. It also provides resources for parents looking to help children who are vaping and may want to quit.

Don Daniels, the director of the tobacco education program at Chatfield High in Littleton, Colo., said he senses what he thinks could be a sea change in teen attitudes.

The reports of people being “truly sick and dying from these devices is enough for young people to make a decision that’s going to benefit their health,” Daniels said. “They’re savvy. This is a smart generation and they’re thoughtful and they have the ability to make good choices.”

Chatfield senior Mia Norrid, a swimmer, doesn’t vape. But her mom posted a story about the vaping-linked illnesses on Facebook and tagged her daughter as a nudge to speak up.

“I think she tagged me so I could let my friends know about it, because a lot of my friends do it,” she said.