“If home building were like health care,” says a new Institute of Medicine report, “carpenters, electricians, and plumbers each would work with different blueprints, with very little coordination.” 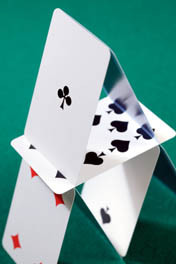 With physicians, hospital administrators and insurance companies on often diverging building plans, the idea that the health care system could fall apart like a badly built house is not surprising, according to committee members at a press conference on Thursday. They called for collaboration across different sectors of the industry.

The cost of an inefficient system is no small burden: the institute, a nonprofit that advises the government, estimated that $750 billion was wasted on inefficient spending and care in 2009.

But the solutions, according to the report, are not strictly financial. In that report, “Best Care At Lower Cost: The Path to Continuously Learning Health Care In America,” a group of public health experts, physicians and scientists propose a strategy to make health care cost effective based on examples of best practices in health technology, leadership and administration.

The 382-page report exhorts physicians to keep up to date with technology, hospitals to improve their management, patients to learn about the system to make more informed decisions and scientists to use stricter standards to evaluate their research.

Eugene Litvak, one author of the report and head of the Institute For Healthcare Optimization, said that hospitals have not been maximizing their productivity. He cited Cincinnati Children’s Hospital, a case study in the report, and one of his organization’s clients, as a success story.

By staggering the surgeons’ schedules more, for example, the hospital was able to decrease its physicians’ overtime and use more of the costly patient beds that were often left empty. The adjustment spared the hospital the need to spend $100 million on new beds.

“These methods of operations management exist in every other industry – it’s only health care and education where they don’t,” Litvak said.

The report also supports the highly debated use of financial incentives to motivate doctors and others to be more efficient. The authors said the new federal Center for Medicare & Medicaid Innovation should take the lead in evaluating  payment systems.

A graph in the report shows that $210 billion was wasted on excess services in 2009, which the authors said could have been avoided by rewarding physicians and hospitals who cut down on unnecessary procedures and treatment.

But the incentive model has met resistance in the health care industry, and some researchers have found that value-based incentives do not significantly affect  the cost of services.

John Goodman, head of the National Center For Policy Analysis, said in an interview that rewarding physicians in this way was not an appropriate method to address the issue. He said that health care providers should be able to choose how to run their own programs.

“I don’t think that the demand side should try to tell the supply side what to do,” Goodman said.

The IOM committee said that the U.S. was spending up to 17 percent of its GDP on health care, a far higher proportion than other developed countries, and with very little additional benefit. That not only affects spiraling government spending on health care, but also siphons off resources that they said should be used for other public services such as education.

Litvak said that the larger problem with the health care system was stubborn adherence to the status quo. “It’s not a shortage of resources,” he said. “It’s the shortage of leadership and willingness to change.”