Big health spending variations throughout the country are largely driven by differences in the use of post-acute services such as skilled nursing homes and home health care by Medicare beneficiaries, and by higher prices that some hospitals and doctors charge commercial insurers, according to an Institute of Medicine report released Wednesday. 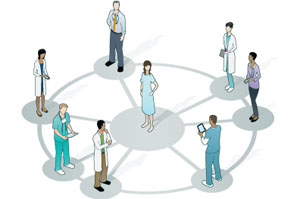 The report recommended that Medicare push ahead with using its financial might to make hospitals, doctors and other providers work more closely and reap rewards or lose money based on how well and efficiently they care for their patients. The IOM panel – which telegraphed this in an interim report, rejected an idea that has been promoted by some members of Congress to pay more to medical providers in areas of the country where Medicare spending is lower, such as Rochester, N.Y., and less in places where it is high, such as Fort Lauderdale, Fla.

The 178-page document represents the government’s most thorough effort to dig into one of the great questions in health research: Why does it cost more to treat patients in some areas of the country than in others? The topic has led to feuds among researchers amid a decades-long disagreement about whether overly aggressive or greedy doctors and facilities are to blame, or whether the true culprits are patients in places that have excessive obesity or other widespread health problems or patients who demand more medical services.

The report, which was commissioned by Health and Human Services Secretary Kathleen Sebelius, drew together an A-list of 19 researchers, led by Harvard economist Joseph Newhouse. Culminating three years of work at a cost of $8.5 million, the researchers did not provide any definitive answers to the overarching questions about regional variation but did focus on some areas they said warrant more inquiry. Other studies, including ones from the Medicare Payment Advisory Commission, an independent agency of Congress, have conducted similar analyses, for instance pinpointing post-acute care as the major variant in Medicare spending.

The IOM panel found Medicare and commercial-insurer spending do not parallel each other either in location or in what causes the somewhat striking geographic differences. The panel assessed regions by the combined spending on patients with Medicare, Medicaid and private insurance as well as the uninsured. “Commercial spending does not correlate with Medicare, and neither of them correlates with our best estimates of an all-in spending,” Newhouse said in an interview.

In Medicare, most of that variation, the committee said, was due to spending in post-acute services such as nursing facilities, home health care and long-term-care hospitals. The panel found that if variations among those providers were eliminated, the overall variation between different parts of the country would drop by 73 percent. “That’s a fairly striking number,” Newhouse said. Removing the variation among hospital spending, by contrast, would eliminate only 27 percent of the differences. Tests and procedures, on the other hand, each explained only 14 percent of the variation between areas, and use of emergency departments and ambulances played no role.

Since Medicare has fixed prices for what it pays, the differences among regions are due to more people being enrolled in certain services, such as home health care; getting care for longer periods; or being channeled into more expensive treatment options, such as going into an inpatient rehabilitation facility.

In the commercial market, by contrast, higher prices negotiated by hospitals, doctors and other medical providers were the key factor in regional variations—not increased use of medical services. An analysis the panel commissioned from Harvard economist Michael Chernew found that 70 percent of commercial spending variations is due to different prices set by hospitals and doctors in different markets. The IOM panel noted this is “most likely reflecting the varying market power of providers.”

Newhouse said that post-acute care is not a big expense for commercial insurers since their patients are generally younger than 65 and are far less likely to need long-term institutional care.

Concerns Have Been Raised For Years

Geographic variation has been a topic of study since 1938, when Sir Alison Glover noted that tonsillectomies were performed at widely varying rates across different locations in England. In the United States, interest in the issue picked up around 1973 when Dr. John Wennberg discovered similar discrepancies around Vermont. He founded an institute at Dartmouth Medical School that annually publishes the Dartmouth Atlas of Health Care, highlighting some of the most striking examples.

In recent years, Dartmouth’s work has been questioned in academic journals and in the lay press, even ending up on the front page of the New York Times. Wednesday’s IOM report affirmed the general subject of Dartmouth’s analysis, concluding that “after accounting for differences in the age, sex and health status of beneficiaries, geographic variation in spending in both Medicare and commercial insurance is not further explained by other beneficiary demographic factors, insurance plan factors, or market-level characteristics. In fact, after controlling for all factors measurable within the data used for this analysis, a large amount of variation remains unexplained.”

But the report also found that examining variations among large regions of the country or metropolitan areas was of limited value in setting policy, because often the differences in spending within those areas were as great—or greater — than between regions. “Potentially, hospitals across the street from each other could be spending different amounts,” Newhouse said at a Washington briefing where the report was unveiled.

Dr. Elliott Fisher, director of the Dartmouth Institute for Health & Clinical Practice, said the panel wrongly downplayed regional spending. “They are absolutely right that policy makers should focus on decision makers, but we can also learn a lot from looking at regions,” Fisher said. “In Florida, there’s a culture of outright fraud and in McAllen (in Texas), there’s of culture of physician and provider-led focus on entrepreneurialism, about trying to make money.

“Is Washington, D.C., going to have two proton therapy machines?” Fisher said. “Those locally-based decisions profoundly affect the care people will get. The notion that we would give up one of our arrows in our quiver, which is having communities pay attention, is what we disagree about” with the report. Fisher and Dartmouth economist Jonathan Skinner also posted their views on the website of the journal Health Affairs.

Fisher said he agreed with the panel’s view that payment changes based on geography would be unjust. “Since providers within a region do not behave similarly, use of a geographic value index would raise a fairness issue,” the panel wrote.

Stuart Guterman, a vice president at the Commonwealth Fund, a health care foundation in New York, paraphrased the panel’s conclusions: “There may be a fire there but it doesn’t mean you throw water on all the trees.”

Instead, the panel recommended that Medicare should continue to change the way it pays hospitals and doctors—the groups making health care decisions— so they coordinate their efforts better. The government has been experimenting with a number of alternative models, including giving medical providers a lump sum, known as bundled payments, to care for all of a patient’s needs for a discrete ailment such as a knee replacement. Another Medicare experiment called accountable care organizations takes that notion a step further by paying a fixed sum to doctors and hospitals to care for any issue that arises for a patient. In both experiments, providers would end up pocketing more money if they kept costs low without sacrificing quality.

“A growing body of evidence leads to the conclusion that clinical and financial integration best positions health care systems to manage the continuum of care for their complex populations efficiently,” the report said. The authors acknowledged that merging doctors and hospitals into larger groups—a trend that is being accelerated by Medicare’s pilot programs—carries the risk that those providers will use their increased market clout to demand higher prices from commercial insurers.

The panel also had no beef with Medicare’s efforts to start adjusting payments to hospitals and, ultimately, to doctors based in part on an “efficiency index” that accounts for whether their patients use more Medicare resources than most people. But even within doctors’ groups, the panel noted that there can be big differences in how patients are treated. The report cited a study that Partners Healthcare in Boston did of a group of six primary care doctors and how each handled patients with diabetes, high cholesterol and hypertension, and how much they tended to order tests and send patients to the emergency room.

“No single physician scored consistently high or low across all measures; instead, each was above average for some and below average for others,” the IOM report noted. “These data demonstrate the difficulty of using composite measures to classify individual physicians as high or low-value providers.” 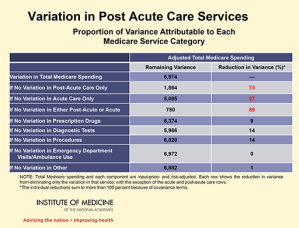