For years, Phil Bretthauer was one of the most expensive patients at UnityPoint Health in Fort Dodge, a small town in western Iowa. The 70-year-old was frequently in and out of the hospital with heart attacks, COPD and prostate cancer. 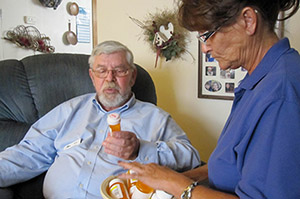 Home health nurse Tammy Bennett visits Phil Bretthauer’s apartment and goes over all 17 of his medications (Photo by Jenny Gold/KHN).

His primary care physician, Dr. Lincoln Wallace, was worried about the same thing. “It’s a demoralizing position to be in to watch a guy like Phil go out the door and to anticipate that he’ll have some event that will likely either threaten his life or end up in the end of his life, and you have little or no way to stop it from coming,” says Wallace.

But this year, UnityPoint – which includes multiple hospitals and doctor practices in Iowa — decided to do something to stop the expensive cycle of illness and readmission for patients like Bretthauer. The hospital signed on to become an accountable care organization, a Medicare program created by the Affordable Care Act that economists say could be a pathway to the holy grail of health care—providing better care at a lower cost.

Here’s how it works: a group of doctors and hospitals get together to form a network responsible for taking care of a group of Medicare patients—in this case, about 9,000 Iowans.  If the network can prove it’s keeping those patients healthier and spending less money to do so, it gets to keep some of the savings. The ACO can then use that money to do things Medicare doesn’t usually cover—like reaching out more to patients at home. But if the ACO does not succeed, it may face a financial penalty.

ACOs have become one of the most talked about new ideas in Obamacare, touted as a way to help fix an inefficient payment system that rewards more, not better, care. About 4 million Medicare beneficiaries are now in an ACO, and more than 428 hospitals have signed up for either the Medicare program or a private ACO. An estimated 14 percent of the U.S. population is now being served by an ACO.

‘Now, I Have Some Way To Get Care To Them’

Wallace, who is not only Bretthauer’s physician but is also medical director of UnityPoint’s ACO, in charge of managing other doctors in the program, believes the ACO has dramatically changed some patients’ care.

“Now, if I have someone with multi-organ system stuff or I know that they’re alone, I have some way to get care to them. And we can only do that because our system is able to figure out a way to make it work financially,” he says.

One of the most important aspects is coordinating care for patients among primary care doctors, specialists and other providers.

Wallace started by identifying the patients, like Bretthauer, who were sickest and costing the most. At the time, Bretthauer had recently spent three weeks in the hospital after a heart attack, followed by another two weeks in a rehab facility. When he finally got home to his apartment, he was sick, alone, and depressed.

“I was just so down. I didn’t have anything to do. I’d get up in the morning and sit in this chair for eight hours,” Bretthauer recalls.

Wallace formed a team to care for Bretthauer, made up of doctors, nurses and home health workers.

At the center is home health nurse Tammy Bennett, who visits Bretthauer at his apartment every week or so  to check in on him and go over all 17 of his medications.

“He needs to know why he’s taking it, what he’s taking, and we need to make sure we’re all on the same page. And if there are any changes, I notify the doctor,” explains Bennett. During a recent visit, Bennett discovered that Bretthauer was accidentally double-dosing on one of his medications.

When Bennett can’t be there, a telemonitor at Bretthauer’s apartment collects and transmits his vital signs. This allows UnityPoint to know exactly what’s going on at any given moment and make changes, possibly averting an emergency room visit.

And Bretthauer says he is much more engaged in his health now. “I feel protected. If something goes wrong, I call them, they get involved. It makes me feel safe,” he says.

Team Work Throughout The System

UnityPoint’s expanded focus on monitoring and data collection extends beyond the home and into the hospital. With the help of an electronic medical record system, the hospital now collects data on each of their physicians to monitor how they’re doing compared to their peers. 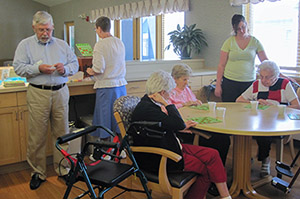 Phil Bretthauer calls a bingo game at the rehab and retirement facility where he was a patient just a year ago (Photo by Jenny Gold/KHN).

“We know what each guys per member per month costs are. I can even drill it down in terms of age, diagnoses, how many people are doing well with their cholesterol control, their diabetes control, their immunization rates,” says Dr. Wallace.

And if a doctor isn’t doing so well, Wallace approaches them with the facts and some potential solutions. Usually they adjust, he says.

But there are some things that can’t be quantified. Earlier this year, Phil was hospitalized for major depression. When he got out, he was worried he’d be back to sitting in that chair, eight hours a day. Nurse Bennett knew she had to do something to keep him from slipping back into a depression.

“Tammy asked me what do you like to do? And I said well I’ve announced at a NASCAR track, and I was involved in baseball,” says Bretthauer. So Bennett helped him get a gig announcing at the little league games six nights a week.

And when baseball season ended, she helped him volunteer at the rehab facility where he’d been a patient just a year before. Bretthauer visits the facility few times a week now—spending time with residents and his favorite: calling the Bingo games.

Bretthauer says being part of UnityPoint’s new efforts has been a lifesaver. And as for the hospital, their care really has gotten better. Patients, including Bretthauer, are healthier and aren’t coming to the hospital as often.

And while the hospital system has not saved enough money to get a bonus just from Medicare yet, they’re hopeful for next year.

In Iowa, Accountable Care Begins To Make A Difference