Mitt Romney caused quite a stir earlier this week when he applauded Israel for spending far less on health care than the United States but neglected to mention that the Israeli system depends on the kind of government regulation he has decried at home. 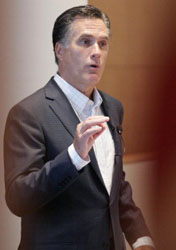 Romney on Monday highlighted the fact that Israel spends 8 percent of its gross domestic product on health care, compared with 18 percent in the U.S.

“We have to find ways — not just to provide health care to more people, but to find ways to fund and manage our health care costs,” he said at a breakfast fundraiser in Jerusalem, according to the New York Times.

So what exactly does health care look like in Israel?  A handy explainer prepared for the Jewish Healthcare Foundation gives the rundown.  Here are some key features:

Romney’s comments rocketed around the blogosphere as numerous articles pointed out that the Israeli system is highly centralized — and similar in some ways to the federal health law that Romney has vowed to repeal.  For example, Israel’s requirement that everyone have insurance is much like the individual mandate.  Plus, as Sarah Kliff explained on the Washington Post’s Wonkblog, researchers have attributed Israel’s ability to hold down costs without skimping on quality to the “strong government influence” over the system.

A Romney spokesman told the Boston Globe that his comments were not intended to praise the entire Israeli system but simply to comment on the need to lower costs in the U.S.

Israel’s Health Care In The Spotlight After Romney Cost Comments