For the second time in two years, the state of California has faulted HMO giant Kaiser Permanente for failing to provide patients with appropriate access to mental health care.

Some Kaiser patients still have to wait weeks or even months to see a therapist or psychiatrist, which violates state laws intended to ensure timely access to mental health treatment, the state Department of Managed Health Care said in a report released Tuesday. (Kaiser Health News is not affiliated with Kaiser Permanente.)

In addition, the department, which regulates California’s managed health care companies, found that Kaiser’s informational materials — as well as some providers themselves — improperly indicated to customers that long-term individual therapy was not available to enrollees, even though coverage of treatment for severe mental illness is required under state and federal mental health parity laws. 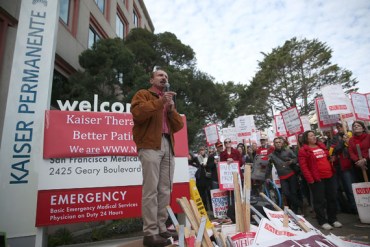 Tuesday’s report is a follow-up to an inspection released in March 2013, which identified four major deficiencies in the health plan’s delivery of mental health services. Kaiser agreed to pay a $4 million fine — one of the largest ever by an insurer in the state. At the time, the managed health care department said it would follow up on the plan’s progress a few months later. The results were not released until now.

In this follow-up report, the department found that Kaiser had solved two of the four problems by improving the way it collects and analyzes data about access to appropriate mental health care.

“Kaiser has made progress in being able to identify when and where the problems around access are occurring, but they are still not able to address the problems when they arrive,” said department director Shelley Rouillard. “They still have a lot of work to do.”

Kaiser officials say they have made significant strides in bolstering their provider network, including increasing their therapist staff. In addition, Kaiser is working with a separate company called ValueOptions to provide additional mental health care when necessary.

“We are proud of the progress we have made to improve access to mental health care,” Kaiser Permanente officials said in a statement. “We are committed to continuing to improve. We acknowledge there are still some areas where we need to continue making progress and do better for our patients,” including improving access to appointments at some locations.

In Kaiser’s Northern Region, the managed health care department found 22 percent of patients did not have timely access to either an initial or follow-up appointment. In one case, a sexual assault victim diagnosed with post-traumatic stress disorder and major depression was prescribed an antidepressant in an initial visit, but no follow-up appointment was scheduled.

The patient was eventually able to schedule an appointment with a Kaiser therapist — five months after her initial visit, the report said.

According to another case cited by the department, a psychiatrist wrote an email to a patient saying that, “No one ever sees a therapist once a week in the Kaiser Health Plan. Not a covered benefit for the past 20-something years and will not be a benefit in the future.”

Based on Tuesday’s report, the managed health care department’s Office of Enforcement will consider whether Kaiser Permanente should face further disciplinary action, which could include another fine.

Kaiser Permanente is one of the largest not-for-profit health plans in the country, with an operating revenue of $56.4 billion and almost 7.5 million members in California.

The company has been in a protracted labor dispute with the National Union of Healthcare Workers, which represents the plan’s therapists. Union leaders have accused the health plan of a “chronic failure to provide … quality mental health care.” In its written statement, Kaiser blamed the union for continued problems in providing timely access to mental health care.

“We need union leadership to work constructively together with us to remove obstacles and solve problems more quickly …” the statement said.