When Kansans think about their Medicaid system, they might have someone like Jessica Corado of Pittsburg, Kansas, in mind.

She was working as a waitress, without health insurance, when she found out she was pregnant. “I was 17, and you know Medicaid really helped me, because I felt like I had no other way of paying for my care, and paying for all these hospital bills.” Her daughter, Kimberly, is four years old now. Aside from a dental surgery, check-ups and preventive care, she doesn’t have many medical needs. And she’s staying healthy.

In fact, pregnant women and children do make up the bulk of the state’s Medicaid population. But the vast majority of Medicaid dollars spent in Kansas isn’t spent on people like Corado. The program also pays for low-income Kansans with disabilities, and for impoverished elders in nursing homes. Their care is at least 10 times more than the $240 per person, per month that pregnant women and children cost.

And the costs have been escalating for the $2.9 billion Medicaid program. So Kansas is in the midst of huge changes. 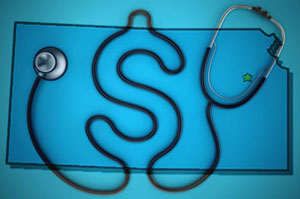 On Jan. 1, the state began enrolling nearly all of its Medicaid population — including its most expensive patients – into a managed care program called KanCare. This effort is unrelated to the federal health law’s Medicaid coverage expansion, on which Republican Gov. Sam Brownback has yet to take a position. Meanwhile, as the transition proceeds, many policy analysts are watching to see if the state has done enough to meet the goal of controlling costs while ensuring that these vulnerable patients receive quality health care.

Overhauling the program, which currently has about 380,000 enrollees, has been a longtime priority for Republican Gov. Sam Brownback. “Even before I was in office, I was talking about the needs that we had in Medicaid, and to get Medicaid better organized, to serve the current constituency that gets Medicaid services — the same numbers at least or more, and to serve with better quality of service,” he said.

Until now, senior citizens who can’t afford nursing home care and people with disabilities have been in the traditional, fee-for-service program in Kansas, even though mothers and children who qualify for Medicaid have been in a managed care program.

But this year, the state began paying a fixed rate for everyone in the program to three major managed care organizations — Minnesota-based United Healthcare, the nation’s largest insurance company; Amerigroup, which was recently acquired by WellPoint (the insurer of more than 36 million people nationwide); and St. Louis-based Centene, the smallest of the three companies managing Medicaid contracts in Kansas, where it operates as the Sunflower State Health Plan.

The state will pay the companies a little more than $500 per patient, per month – about $1 billion per company.

The Brownback administration’s KanCare point person, Lt. Gov. Jeff Colyer, said: “When we originally started looking at this, we estimated we would save about $830 million. We’ve contracted for savings of at least a billion dollars … over the next five years.” That doesn’t mean that Medicaid costs will go down. It just means they won’t go up as much as they would have under the old system.

Colyer, who is also a physician, added that for the companies to make money they’ll have to make Medicaid more efficient and keep the Medicaid recipients as healthy as possible: “The goal is to get them better care, so instead of ending up at the hospital six times in a year, you actually have a care coordinator for integrated care, so that maybe they’re only in the hospital three or four times.”

The managed care companies also have promised to add some services not previously available under Medicaid, Colyer said. “Through the power of competition, we [are] now able to add a basic dental benefit that didn’t exist before. We start providing for bariatric services for obesity care. And remember those people that couldn’t get a heart transplant?  Well, now we at least are going to have the opportunity to do that.”

But KanCare’s potential to control costs is by no means a sure thing.

According to Michael Sparer, a Columbia University professor of health policy, “good research” is surprisingly thin, and reaches the same conclusion: Medicaid managed care hasn’t yet produced the hoped-for results of lowering costs and raising quality in states where the concept has been tried. That’s mostly because much of the existing research focuses on managed care programs that serve low-cost Medicaid populations such as women and children. But he notes there may be more potential to save significant amounts of money when high-cost populations’ care is managed.

Colyer says the state has what he calls “a big stick” to enforce those terms. “We’re holding back $500 million over the next few years, and we’re looking for results — for good outcomes, for good behavior. And they don’t have an ‘out’ clause. We have control.”

“The request for proposals certainly has numerous provisions that are intended to protect both providers and beneficiaries,” said Martie Ross, an attorney now working as a health care consultant in suburban Kansas City. Ross has been helping hospitals, health departments, mental health centers and safety net clinics evaluate their provider contracts with the managed care organizations. “The question will be how those are interpreted by the state and the managed care organizations (MCOs), and how aggressive the state will be in enforcing those provisions.”

But Ross also said it’s possible that the companies will try to keep costs down by denying coverage for some treatments. She said the contracts aren’t specific about which services are medically necessary, which can create an incentive “to try to keep the services in check, while still maintaining compliance.  That’s the cheap way to savings … you just squeeze out services.”

She isn’t saying the contractors will do that, but she does maintain that it’s a potential source of “mischief.”  And the idea that the large, for-profit companies tamp down or cut services to maximize profits makes some consumers, health care advocates and providers nervous.

Debra Donahue, a financial analyst for Mark Farrah and Associates who closely follows the insurance industry, is generally reassuring: “The reality is, what the managed care industry brings is a lot of high-technology services that actually look at who is the population that needs care, needs preventive services and gets them those preventive services so that it reduces care down the line.” And keeping patients on track with their care plans is where KanCare can find savings, said Ross.

Meanwhile, in some states that have turned to Medicaid managed care, one of the big problems has been failure to pay doctors, hospitals and nursing homes in a timely fashion. Ross pointed to the findings of a Kentucky state audit as an example. Kentucky “had paid out $740 million, but the managed care organizations had only paid the providers somewhere south of $500 million. That’s $200 million the providers don’t have in their pockets.”

Such circumstances can prompt doctors and other medical providers to stop seeing Medicaid patients, in turn, making it more difficult for them to get the care they need.

This is where the “hold-back” of $500 million comes into play. The managed care companies are required to process claims within 30 days. But if they want to receive the so-called “pay-for-performance” bonus, those claims must be processed in 20 days. Ross said it’s a powerful incentive. “That’s three to five percent of their take from the state. These are billion-dollar contracts. That’s a lot of money.”

In the first year, companies earn those bonuses by hitting administrative milestones, such as paying providers on time. For years two and three, the bonuses are pegged to demonstrating improved care for patients. Once again, she added, the contracts aren’t specific enough to be airtight.

Beyond the financial incentives to make KanCare work, Ross sees another motivating factor for the Brownback administration: “They have planted the stake in the ground, and they are putting their political future on that,” she said.

But some observers wonder whether the three companies have committed to more than they can deliver and remain profitable.

“If they’re not able to squeeze out the level of savings they believe, then the contracts they’ve signed with the state aren’t going to be sufficient to support their costs, and they’re going to have to come back to the state, and ask to renegotiate,” said Sheldon Weisgrau, who heads the Kansas-based nonprofit Health Reform Resource Project.

Weisgrau said the companies have a right to do that. Then the state would have to choose between increasing the payment rate or letting them out of the contract. In the end, KanCare is a multi-billion dollar gamble. The state has rolled the dice, and it will take months — maybe even years — to find out whether their bet pays off.