Skip to content
This story is part of a reporting partnership that includes Kansas Public Radio,

A few months ago, Kansas seemed ahead of the game in preparing for an important requirement of the federal health law. The state had started to plan for exchanges — online marketplaces to help individuals and small businesses compare and buy health insurance.

But politics is intervening. 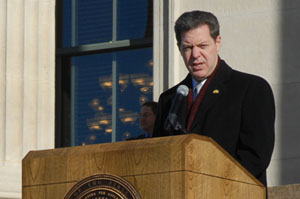 Kansas Gov. Sam Brownback never liked the Affordable Care Act, saying “Obamacare [is] an abomination.” As a U.S. senator, he voted against it. And during his campaign for the governor’s office last year, he made a vow: “What we’ll do in Kansas is we’ll do what we’re required to do, but we’re gonna fight it all the way.”

Kansas has since joined the major lawsuit challenging the constitutionality of the law. And in August, Brownback sent back a $31.5 million federal grant. That money was meant to start modernizing computer systems, including the one-stop website called the Kansas Health Insurance Exchange. This online marketplace would allow people to compare and sign up for individual and small group health insurance.

Brownback’s move put Kansas Insurance Commissioner Sandy Praeger in a bit of a bind. Praeger, who is a moderate Republican, was in charge of administering the grant. She says the governor is betting that the new health law will be repealed.

“And they don’t want to do anything that looks like Kansas is moving down a path of implementing, because they think that diminishes the effectiveness of being a part of the lawsuit,” she says. “And I understand that. I mean, they are very committed to repealing Obamacare.”

In conservative Kansas, that may be smart politics, but Praeger worries that it’s not sound policy. If the law is fully implemented in 2014, every state will be required to have an insurance exchange. States that don’t establish their own would have to turn to the federal government. 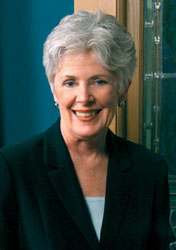 “How do you quantify the cost of individuals not being able to purchase from the plans they want to purchase from because the plan management is taken away from the state, and is directed at the federal level?” she says.

Insurers are still hoping for a state-based exchange.

“We are too busy running our business in a very difficult environment, an environment of uncertainty, to worry about the political wrangling,” says Matt All, the top lawyer for Blue Cross and Blue Shield, which is Kansas’ largest health insurer. “We are solely focused on getting ready for whatever the marketplace is gonna be in 2014, whenever the exchange is supposed to open up.”

“We don’t know enough yet to be fully ready,” he says. “There are just a few proposed regulations out.”

The timing is tricky. Praeger says lawmakers and the governor have indicated they don’t want to do anything to establish an exchange before the Supreme Court rules on the constitutionality question. And that won’t come before June, at the earliest. Kansas’ 2012 legislative session will have ended by then.

“Well, if we don’t get legislation passed next year and signed by the governor, we won’t have a state exchange, because we won’t be able to certify in January of 2013 that we’ll be ready,” she says.

Praeger is continuing on with her behind-the-scenes planning. She says if Kansas doesn’t have its own exchange, the state could still retain at least some control by partnering with the federal government. But that, too, would require the governor and state lawmakers to cooperate, which doesn’t seem likely in the current political environment.