This story is part of a reporting partnership that includes Kansas Public Radio,  and Kaiser Health News.

It may be a new budget year for Kansas, but it’s the same level of funding for anti-smoking efforts in the state.

And that’s just the problem, anti-tobacco activists say. Kansas falls far short of the federally recommended level of spending for anti-tobacco programs. In fact, the state earns an F for prevention spending in the American Lung Association’s 2012 State of Tobacco Control report. 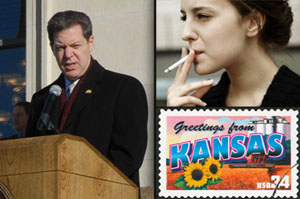 Of the $745 million in tobacco lawsuit-settlement funds and $1.4 billion in tobacco taxes in the past 12 years, less than $11 million has gone specifically for anti-smoking programs. The federal Centers for Disease Control say Kansas should have spent about $32 million per year for a wide range of prevention efforts.

And Gov. Sam Brownback’s budget makes no change: those funds and taxes will continue to pay for other needs in the state.

One effective tool to help smokers quit is telephone counseling, like the toll-free hotline, available in all 50 states, 1-800-QuitNow. Kansas spends approximately $1.10 per smoker on its quit line; the CDC recommends it spend almost 10 times more – $10.53 per smoker, according to the American Lung Association.

According to the CDC, Kansas should be spending $3.7 million per year just on media. The state’s actual budget for anti-tobacco advertising is $90,000.

The Kansas Department of Health and Environment does produce anti-smoking messages.  A video, found on its website, focuses on the cost of smoking.  “The average smoker spends about $150 a month on cigarettes. That’s almost two thousand dollars a year!  If you’re tired of paying the price, call the Kansas Tobacco Quit Line.” But Hellebust questions how many people are seeing that message.

The multi-state lawsuit settlement with the major tobacco companies provides almost double the amount of funding the CDC recommends for the state’s anti-tobacco programs.

But Kansas lawmakers decided in 1999 to devote most of that money to a special fund for early-childhood programs—things like early education, children’s mental health, and services for infants and toddlers with disabilities. That decision has the enthusiastic support of Shannon Cotsoradis, who heads the research and advocacy group, Kansas Action for Children.

“I think there are a lot of reasons that it influences the child’s life in a positive way.  We’re putting them in a positive, nurturing, supportive environment,” Cotsoradis says. “They’re more likely to get access to things like health care and good nutrition, have positive adult role models. All of those things influence whether or not a child engages in risky behaviors in their adolescent years.”

Cotsoradis says that means these programs make kids less likely to use tobacco, even if that’s not the main focus of those dollars.

Kansas Secretary of Health and Environment Dr. Robert Moser supports using settlement funds for children’s programs. And he thinks it’s unlikely that Kansas will devote anywhere near $32 million dollars recommended by the CDC for tobacco prevention.

“There are always things we can do with more dollars, but we live in a time where more dollars are not likely [to] be forthcoming, and so now we have to look at, you know, what interventions, what programs have been most effective, so that we focus on those, perhaps, as more higher priority than some others that maybe aren’t as effective,” Moser says.

Danny McGoldrick, research director for the Campaign for Tobacco-Free Kids, argues that Kansas should raise its tax on tobacco – a move that would garner more revenue for the state and would discourage smoking.

It’s been ten years since Kansas raised its cigarette tax – to 79 cents per pack. McGoldrick says the average nationally is $1.46.

“The health care costs associated with smoking in Kansas are over $900 million, so when we invest in tobacco prevention, we not only pay for the program, but in the longer term we save health care dollars,” he says.