Dr. Vito Imbasciani has been at war with viruses since he was 5.

Growing up near the U.S. Military Academy at West Point in New York, he contracted polio in 1952 and couldn’t walk for two months. In medical school in Vermont 30 years later, he witnessed AIDS steal the lives of otherwise healthy gay men.

Now, Imbasciani, secretary of California’s Department of Veterans Affairs, and his staff are responsible for keeping the novel coronavirus away from the state’s eight veterans homes. California’s defenses are holding.

The explanation, many say, lies in CalVet’s intense preparation, quick response, attention to hygiene and leadership, starting with Imbasciani, a physician and retired colonel who not too many years ago could have been discharged from the military because he is gay.

“We created our own fortune,” Imbasciani said, looking to knock on wood.

Deaths are part of life in the state-run veterans homes. The homes are populated largely by frail men and women, some of them veterans of World War II and Korea, and many from the Vietnam War era. A quarter of the vets admitted to California’s homes in recent years had been living homeless.

COVID-19 has hastened the end for scores of retired soldiers in veterans homes in other states: More than 70 veterans have died of the disease at a “soldiers’ home” in Massachusetts; more than 125 have died in New Jersey’s three homes; more than 60 residents of an Alabama veterans home tested positive, and eight have died.

The California Department of Veteran Affairs, by contrast, is holding the beastly infection at bay. In its eight homes, where 2,100 veterans reside, three residents have contracted the disease, and two have died of it, one in his 90s and one in his late 80s.

“It’s all hands on deck,” state Sen. Bob Archuleta, a Los Angeles-area Democrat who chairs the Senate Veterans Affairs Committee, said of CalVet’s response. “It goes back to the staff. We have people who care about their veterans, and they will go the extra mile.”

Like Archuleta, Imbasciani credits the work of the front-line staff of nurses, nursing assistants and doctors who provide direct care. But leadership matters, and Archuleta and others also point to Imbasciani.

CalVet’s leader is a 73-year-old urologic surgeon who speaks six languages and has a master’s degree in musicology and a doctorate in philosophy. The son of a World War II tail gunner and grandson of a World War I vet, Imbasciani served 27 years in the Army Medical Corps. He deployed to war zones four times before retiring as a colonel in 2014.

For most of those years, Imbasciani had to hide his personal life because of President Bill Clinton’s “don’t ask, don’t tell” policy that sought to keep LGBTQ service people serving in the closet.

“The price of my service was to live a lie,” Imbasciani told the crowd of 600 when introducing the president, as quoted by The Washington Post. “But not anymore.”

Imbasciani was director of government relations at the Southern California Permanente Medical Group in September 2015 when Gov. Jerry Brown appointed him secretary of the California Department of Veterans Affairs. Gov. Gavin Newsom reappointed him in January, even as the novel coronavirus was starting its global spread.

Over the years, Imbasciani has tracked SARS (severe acute respiratory syndrome), Ebola and Zika, among other viral threats. In January, when scientists in China sequenced the DNA of a mysterious new coronavirus that had emerged in Wuhan, Imbasciani thought, “Here we go again.”

He assumed the virus would storm the West Coast, as did CalVet’s director of long-term care, Thomas Bucci. Based on the devastating events unfolding in Wuhan, they quickly recognized COVID-19 as a disease far worse than the flu.

Bucci, an Air Force veteran, spent 38 years as a health care administrator before going to work for the state in 2015. Knowing that older and immunosuppressed people are particularly vulnerable, Bucci said: “We had a big bull’s-eye on ourselves.”

By mid-February, a month before the World Health Organization declared COVID-19 to be a pandemic, Bucci was regularly communicating with directors of the eight homes about the threat, and, along with Imbasciani, implementing a 38-step plan.

The protocol began with the basics. Directors of each home updated their emergency operations plans. They ensured they had enough surgical and N95 masks, gloves and gowns for the staff, and even disposable dinnerware, to minimize the chance of spread.

As of Feb. 26, all visitors were directed to sanitize their hands before entry, and staff began disinfecting common surfaces every 30 minutes. On March 4, as the infection killed the first of dozens of residents at the Life Care Center in Kirkland, Washington, Imbasciani discussed the coming onslaught at an executive team meeting. And by March 15 — four days before Newsom issued the statewide stay-at-home order — all visitors were barred, with the exception of family members paying respects to veterans in hospice. 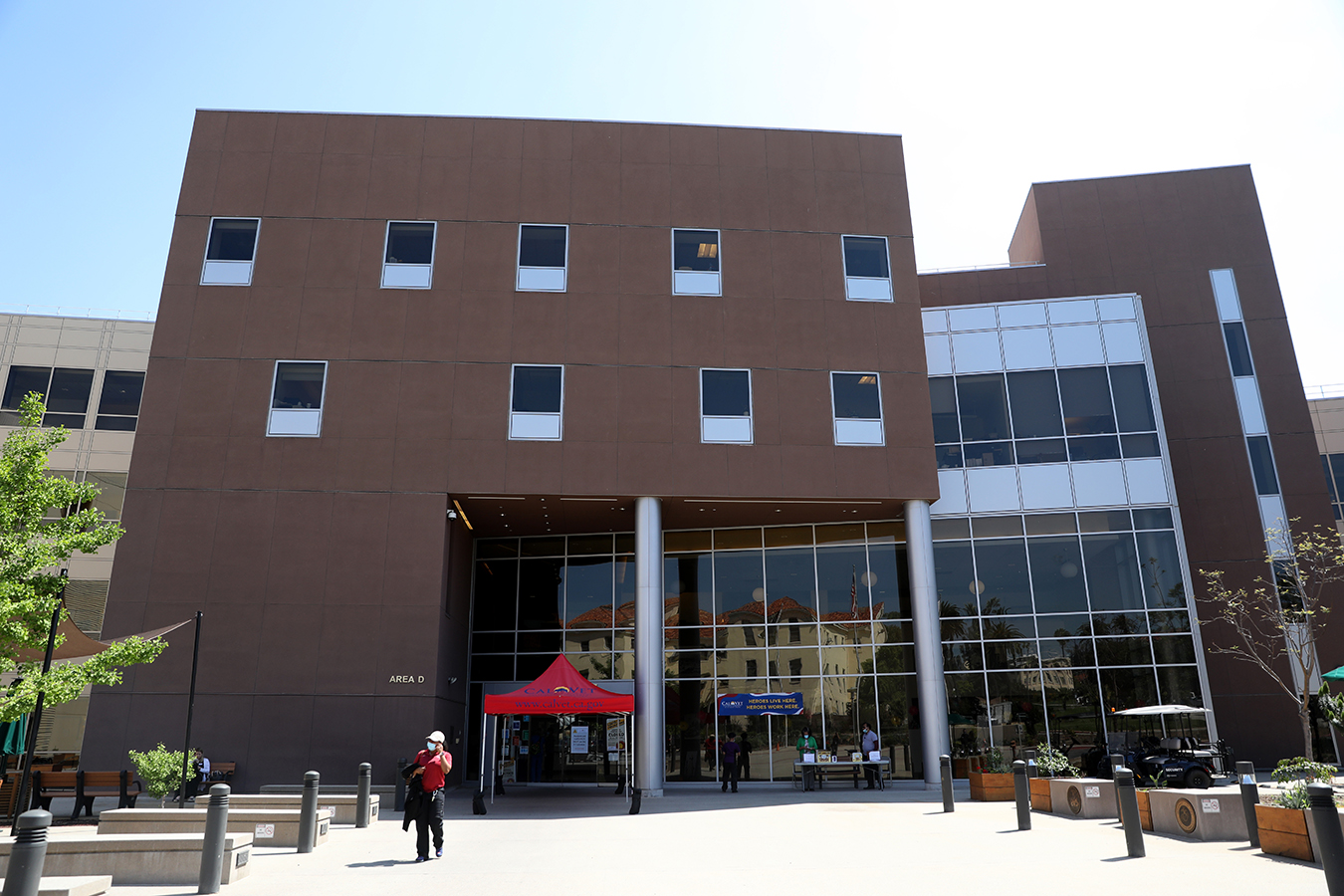 The Veterans Home of California, on April 30, in Los Angeles. California has managed to keep COVID-19 at bay at its eight state-run homes for frail and older veterans, despite the virus’s persistent march through nursing homes around the country.(Gary Coronado/Los Angeles Times)

Now, all staffers have their temperatures taken when they arrive for work and are sent home if they show symptoms. At four of the homes, all workers are encouraged to take tests for the virus, and all residents are tested. At the other four, employees who have been exposed to a known or suspected COVID-19 case are being tested, as are any residents who show symptoms.

All staffers wear masks, as do residents when not in their rooms. Residents are required to social-distance, meaning no congregating closely for conversation or card games. Meals are delivered to residents’ rooms.

The Veterans Home of California-Yountville opened in Napa Valley in 1884. How it withstood the 1918-19 influenza pandemic is for the most part lost to history. A century later, however, not a single COVID-19 case has been recorded among its nearly 1,000 residents.

Muriel Zimmer, 85, a Korean War-era Air Force veteran, has been living at the Yountville home for nine years with her husband, Dick. He needs more care and lives in the skilled nursing section of the facility, limiting her ability to see him. They’re allowed only brief conversations, and from a safe distance.

She also misses seeing friends in the dining hall. But she remembers rationing during World War II, and knows others have it much harder. She is able to walk across the Yountville grounds, with its sweeping views of the Napa vineyards below, and notices small things, like the monarch butterfly that flitted by the other day.

“I almost get teary-eyed when I think about the staff,” she said. “We are blessed.”

At the Redding Veterans Home in Shasta County, Michael Vancleemput, a Vietnam-era Army veteran, spoke by phone through a mask, as a worker walked past disinfecting surfaces. “They’re personally motivated to serve us. It’s not like they’re doing a job,” said Vancleemput, 79.

He has to socially distance from his friends, not that it’s a problem. He lived alone for years in the small town of McCloud at the base of Mount Shasta before moving to the veterans home five years ago. A ham radio operator, he said he keeps in touch with other members of the home’s amateur radio operators club.

“I would invite you to visit our institution,” Vancleemput said, then paused. “Not now.” No visitors allowed.

The bulwark that CalVet has erected against COVID-19 builds on a series of improvements. When Imbasciani and Bucci arrived, the state-run homes used paper records. Now, medical records are tracked electronically. Each home once operated independently. Now, they are part of a system with standardized procedures.

CalVet’s nurses, nursing assistants and physicians are state civil servants with union representation and paid sick leave. One nursing assistant might be responsible for six or eight residents. At a private nursing home, an aide more typically handles 10 or 12. CalVet also has staff physicians on-site every day.

For many years, the federal government, which rates nursing homes, gave CalVet’s homes dismal marks. Now, among the homes that have been rated, four have the highest designation of five stars, and one has four stars.

“It does show that when there is strong and visionary leadership, it can make a big difference,” said Charlene Harrington, an expert on nursing home care and professor emerita at the University of California-San Francisco.

In the military, superiors give what are known as challenge coins to soldiers as an attaboy. The coins have a hierarchy. One bestowed by a two-star general carries greater bragging rights than, say, one given by a one-star general.

Imbasciani’s challenge coin is one of his most prized possessions. It’s a little larger than a silver dollar and is stamped with the presidential seal and the name of the 44th president. Obama gave it to him, and no one outranks the commander in chief, Imbasciani noted.

At California’s eight veterans homes, the walls are holding, so far. But Imbasciani knows an asymptomatic carrier could cause a breach any day. He is, after all, someone who has been battling viruses since he was a boy. He can even imagine the epitaph on his tombstone:

Keeping The COVID Plague At Bay: How California Is Protecting Older Veterans